The UCSB men’s tennis team continues their win streak into the postseason. As the Gauchos sweep semifinalist UC Irvine at a score of 4-0, then took home the Big West conference title following a win in the championship game against rival Cal Poly by a 4-1 result.

The Gauchos completed their regular season campaign with a win over the Mustangs and were able to round off the first part of their postseason with a respective back to back victory. Following these results, UCSB currently stands at a 19-5 overall; thanks to an undefeated Big West conference performance. Not to mention, they are also on a 12 game win streak that first originated back on March 15. 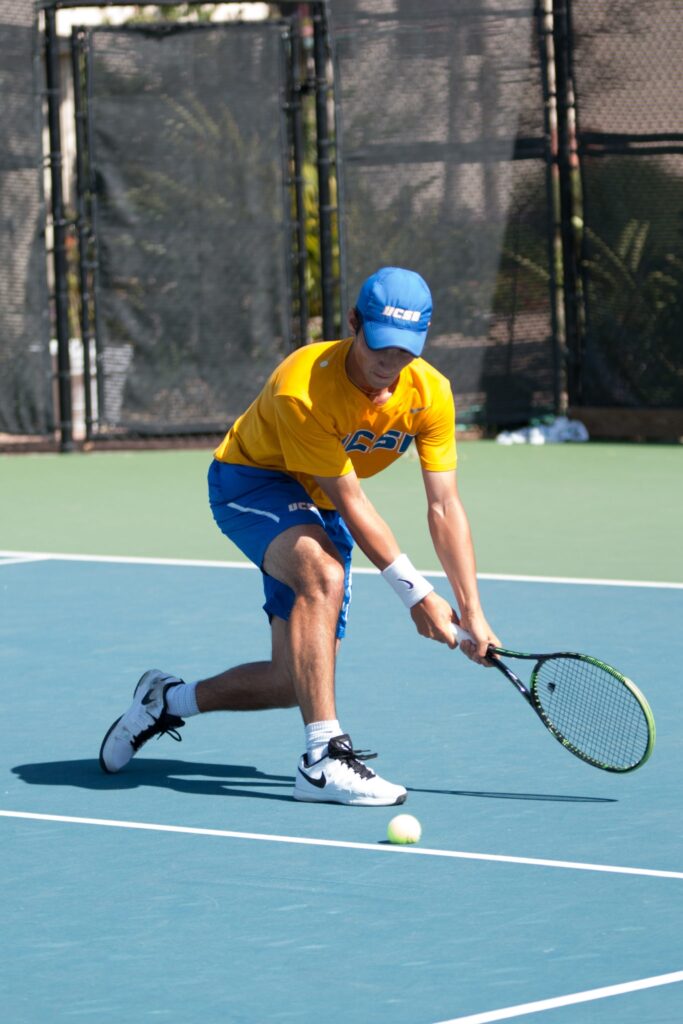 Irvine, following their defeat to Santa Barbara, ended their season at a 9-15 overall and a 2-3 in conference play. As for third seed Cal Poly, their showing as a finalist puts them at an 18-8 overall. This loss also knocks the Mustangs out of the Intercollegiate Tennis Association’s top 50 standings and erases their chances of attending the coveted NCAA postseason tournament.

The doubles portion was more closely fought than the Gauchos would have like. Nevertheless, UCSB won on every doubles court; thanks to Morgan Mays / Simon Freund on court 1 (7-5), Nicolas Moreno / Anders Holm on court 2 (6-4), and Cody Rakela / Kristian Prior on court 3 (6-6).

The singles portion of Thursday’s meet was where the Gauchos finally found their form, as they lead 1-0 with the doubles advantage point. First to finish was Holm on court 4, whom bested UCI’s Mason Hansen after a pair of 6-2 victories.

Next was Rakela vs. Bruce Man-Son-Hing on court 5, which ended in Santa Barbara’s favor at 6-1 / 6-2. Then, the deciding match took place on court 3 where Freund almost swept Luis Lopez by a score of 6-0 / 6-1. Ultimately, this gave UCSB the three remaining points necessary to take home the early 4-0 win on the day; thus granting them a Big West Championship spot on Sunday.

Cal Poly defeated second seed UC Davis that same Thursday after a hard fought 4-2 win, therefore earning themselves a visit with UCSB for the second year in a row.

Sunday’s finals meet almost mirrored the same intensity as these teams’ regular season bout. The day began with the doubles portion, per usual, as court 3 first went in favor of Mustangs Auproux and Damiens by a score of 6-4. UCSB then responded on court 2 with a 6-2 victory by Moreno and Holm.

Finally, the deciding doubles match was an exciting nail biter on court 1 where Freund / Mays met against Pang / Donovan for perhaps their most important sets of the season. It was a tough competition to watch, but UCSB eventually prevailed by a close victory of 7-6 (3).

Currently with the doubles advantage point and early 1-0 lead, the Gauchos were just 3 wins away from earning the title through singles play. Cal Poly’s Corey Pang made a quick statement on court 1 with a pair of 6-4 victories, bringing his team back into the meet at a 1-all score.

Now, with the meet at 3-1 and in favor of Santa Barbara, the next court to finish would be able to decide the tournament. On court 2, Nicolas Moreno faced off against Ben Donovan as the two battled it out for a three setter.

Moreno took the first with a smooth 6-0 sweep, but then Donovan clawed back into it with a 6-4 of his own. Then, Moreno earned not only another victory for his team, but the last point necessary to crown UCSB as champions in the Big West conference.

Upon the meet’s conclusion, the ceremony commenced as the Gauchos celebrated a three-peat championship performance. Including the second year in a row in which Santa Barbara topples their rival Cal Poly, in the finals, by a score of 4-1.

Following last weekend’s results, UCSB’s ITA rankings continue to grow as they are currently hoping for a participant spot in this year’s NCAA Men’s Tennis Tournament.

The Gauchos will take a short break as they await a tournament at-large bid from the selection committee. Tune in this Tuesday at 2 PM as the Selection Show will inform UCSB of their NCAA Regional game opponent.