After two losses to drop their SDSU series last weekend, the UCSB baseball team picked up a midweek win at home against CSU Bakersfield before heading into this weekend’s road series to face Big West opponent UC Riverside.

UCSB is now sporting an 18-20 overall record and is 4-5 in Big West play, while the Highlanders are 14-22 on the year and are sitting in last place in the conference with a 2-10 record against their Big West opponents. 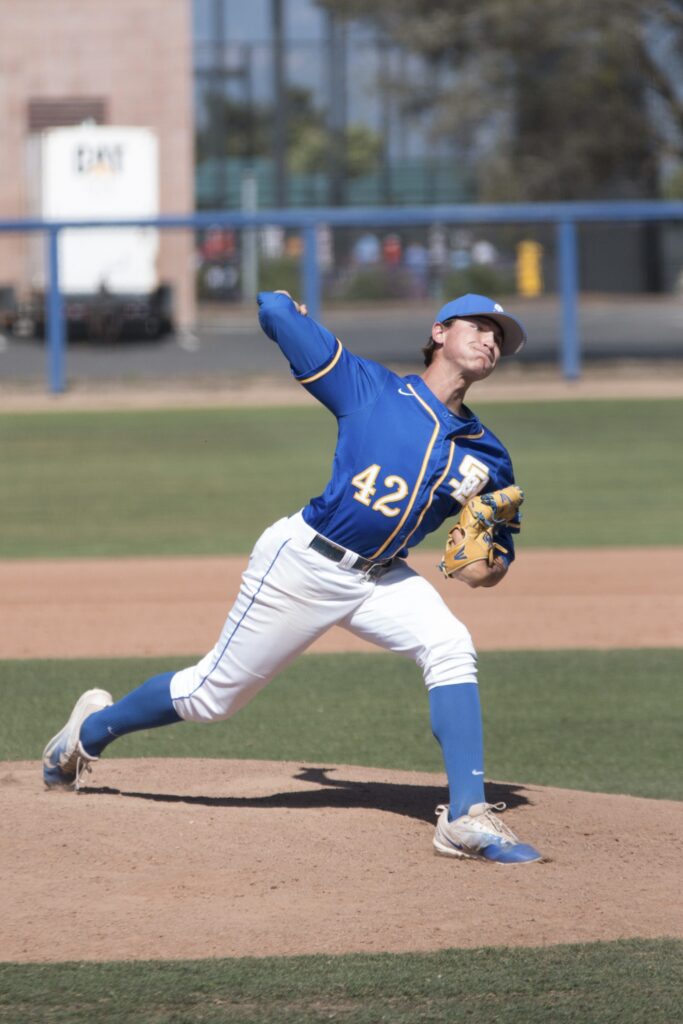 Shea Barry proved his might on the mound. Stephen Manga / Daily Nexus

UCR will be welcoming the Gauchos coming off a 7-4 midweek win over SDSU, which was their first win after having lost five straight and only the second win in their last ten games.

Santa Barbara has won six of its last ten, but its last four wins have been a bit too close for comfort, with only a one to three run difference in the final score.

But to their advantage, they trump Riverside in just about every offensive statistical category, leading UCR overall as a team in runs, hits, home runs, RBIs, walks, and stolen bases with a collective .277 batting average over the Highlanders .249 team average.

Individually, UCSB junior Austin Bush is tied for first in Big West home runs at nine so far with CSUN junior Albee Weiss and is sitting at second, following Weiss, in conference RBIs with 32. Bush is one of the Gauchos biggest power hitters as the team leader in RBIs and home runs, along with sophomore Sam Cohen who is slugging .529 just above Bush’s .517 percentage.

From Riverside, freshman Connor Cannon is behind Bush and Weiss in Big West homers with seven, putting the pitcher and first baseman for the Highlanders at second in a three-way tie with UC Irvine junior Keston Hiura and CSUN redshirt junior Kevin Riley. Other than Cannon, who also leads his team in RBIs, there is no one else from UCR is leading individually in conference hitting stats.

Another Highlander for the Gauchos pitching staff and defense to tread lightly with at the dish is Mark Contreras, who is leading his team with a batting average of .402 and a mighty slugging percentage of .598.

Regarding defense on the diamond, UC Riverside has been just slightly tighter and cleaner than UCSB this year with a .967 fielding percentage and eight fewer errors than the Gauchos line of defense, which has produced a .962 fielding percentage.

On the mound, though, UCSB comes out on top with a combined 4.72 ERA to the Highlanders 5.50 ERA, also having allowed 25 less total earned runs, 39 fewer walks, and 14 more strikeouts than the UCR pitching staff.

The last time these two teams challenged each other was at the end of the 2016 season, in which the Highlanders grabbed the three-game series from the Gauchos with two wins at Caesar Uyesaka Stadium.

Based on the subpar offensive and pitching statistics on behalf of UCR in comparison to those of UCSB, this could be an opportunity for the Gauchos to take advantage of their opponent’s larger weaknesses at the plate and on the hill to improve both their conference and overall records back to the .500 mark, or above, if they can execute two victories this weekend.

However, as a disclaimer, previous statistical analysis cannot predict anything that will happen within nine innings of baseball.

So although this is a team performing below average thus far, it does not mean that the Highlanders cannot defy expectations and start performing anomalous to their recent battles to keep it interesting.

If there is anything a baseball player, coach, or fan can expect, it would be to not have any expectations. We can paint a pretty picture based on statistics and think about who should win, but it’s rarely the case that those statistics consistently and accurately translate what can happen, who could be the catalyst or the hero, or which team will end up taking the win.

The series kicks off at 6 p.m. on Friday at Riverside Sports Complex, with another 6 p.m. evening game on Saturday, and an afternoon Sunday game at 1 p.m. to round out the series.