The Daily Nexus
Tennis
Men’s Tennis in Search of Three-Peat Heading Into the Big West Tournament
April 27, 2017 at 5:12 am by Richard Benites 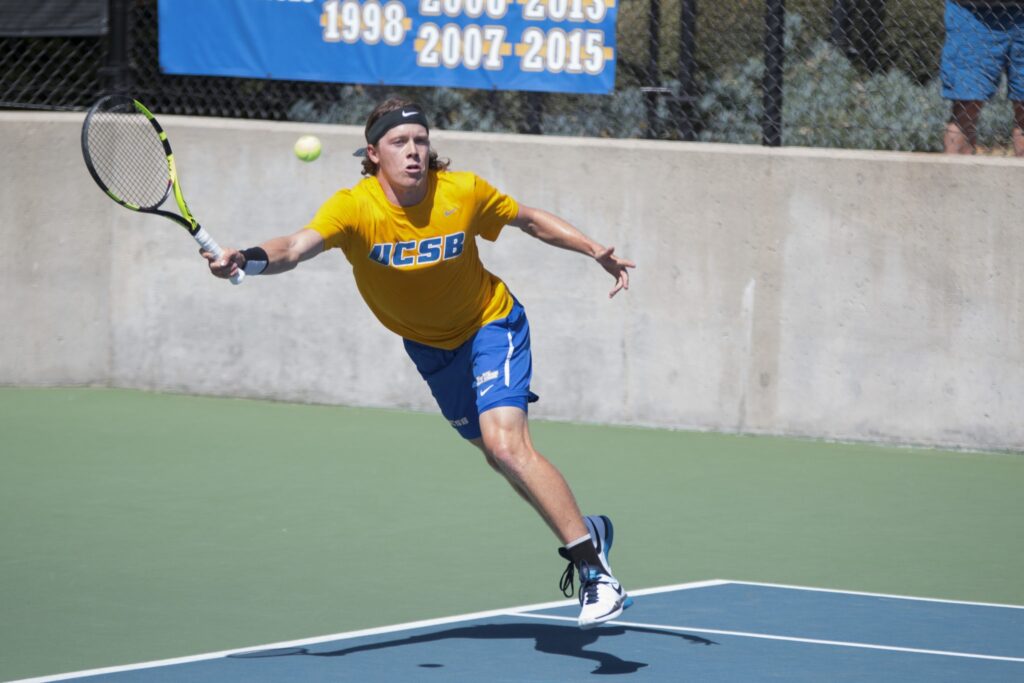 Last weekend served as the concluding point to a stellar 2017 regular season campaign for the UCSB men’s tennis team as the Gauchos bested their Blue-Green rival Cal Poly 5-2.

Following the result, the Gauchos are currently 17-5 and possess a 10-match win streak.

Garnering the No. 1 seed in now back-to-back tournament appearances, they also finished at an undefeated 5-0 in the Big West Conference standings, therefore granting them the conference’s first seed and a first-round bye.

For the second-straight time, UCSB captured an unbeaten 5-0 record. It also earned its fourth regular season title with Head Coach Marty Davis at the helm.

Dating back to April 11, 2015, UCSB has extended its win streak against Big West opponents to 11 straight victories in the regular season.  Including the past two conference tournaments, Santa Barbara holds a 16-match win streak against its Big West counterparts.

Santa Barbara has been in outstanding form as of late; its last meet loss was way back on March 13 against No. 4 Texas Christian University.

After their victory over the current No. 50 Cal Poly, the Gauchos are currently No. 40 in the nation according to Intercollegiate Tennis Association rankings.

The duo sensation of Gaucho junior Simon Freund and senior Morgan Mays maintains a No. 30 doubles ranking as well, moving down one spot from No. 29.

“This match [against Cal Poly] was actually bigger than the western conference regular season title,” Davis said. “We think it’s going to leave us far enough in the rankings where our RPI should get us into that large [NCAA selection] bid, regardless of the result at Indian Wells.”

Coach Davis is referring to a spot for the Gauchos in the NCAA 2017 Division I men’s tennis tournament. That, of course, won’t occur until after the Big West Tournament and is set for some time around the middle of May.

There’s much to know as UCSB enters the Big West Tournament in fine form, as well as with many historical accolades.

The men’s tennis team will be competing for its third consecutive conference title. The Gauchos have previously won the Big West Tournament championships a total of 10 times program history.

They have won 7 of the last 11 tournaments at the Indian Wells Tennis Garden, which will once again be this year’s competition venue.

Last year’s Big West championship concluded with a No. 1 and No. 2 seed finals matchup that had Santa Barbara face off against rival Cal Poly.

Previewing Friday’s potential competitors, UCSB will meet against the winner of Wednesday’s No. 4- versus No. 5-seeded match of UC Irvine and the University of Hawaii.

UCSB’s dominance of both programs has been well established over the years.

It last lost to UC Irvine during the 2014-15 season and fell to Hawaii during its 2012-13 campaign. Due to rain, the matchup between UCSB and Hawaii was canceled during the 2013-14 season.

Irvine ended its season with a 5-2 loss to No. 2-seed UC Davis and concluded its 2017 regular season at 8-14. The Anteaters also managed a fourth-place conference ranking following a 2-4 finish.

UCSB previously defeated UC Irvine 5-2 on April 15 while on the road.

As for Hawaii, the Gauchos opened up their season with an away doubleheader against the Rainbow Warriors, which resulted in a 7-0 sweep. They ended the season last in the Big West Conference standings at 1-4 and also finished their regular season with a meager 2-14 overall record.

UCSB will face off against the winner of the No. 4/5 seed match, either UC Irvine or the University of Hawaii, this Friday, April 28 at 3 p.m. at the Indian Wells Tennis Garden.