Coachella just keeps getting bigger. This year, not only were the grounds literally pushed outward on the far end, giving the Outdoor Theatre and Gobi and Mojave tents more room (and less bleed of audiences and sound from Sahara and the main stage), but over 20,000 more festival goers were admitted for each weekend. Also, two new, desert-themed tents were added (or a net of one tent, if you subtract James Murphy’s Despacio experience from last year): the punk and DIY-focused Sonora and the breathtaking digital art project, the Antarctic. As the music festival of music festivals grows up and out, with more feet stomping grass and more eyes looking in, it stakes more of a claim in California youth culture. So, Artsweek visited the fest this past weekend to take it all in and break it all down.

Our generation’s rockstar, Mac DeMarco, won the Outdoor crowd over Friday afternoon with his trademark gap-toothed charm. Vibing effortlessly with his bandmates and friends, Joe, Jon and Andy, Mac’s playfulness was as infectious as ever. Lampooning both the culture of high-profile guest appearances at the fest and the culture of popular mediocrity, the band welcomed “Ed Sheeran” to the stage in the form of redheaded friend and former bassist Pierce McGarry, who displayed an affected British accent. Mac has earned this little jab; even as he continues to accrue more and more followers and influence, he’s continued to develop his talents. As he belted out the first “Oh baby” of one of his best and most rarely performed songs, “My Kind of Woman,” he displayed an almost stunning vocal acuity that stood out from his usual low talk-singing of shows past. His emphatic performance filled out the range of the song, and his increased singing chops paired with the comfortable tightness of his band made this an act not to miss over these weekends. UCSB class of 2016 alumnus Dar Sadeghi counted himself a fan after the set, saying that he thought it was “the best I’ve seen this weekend.” 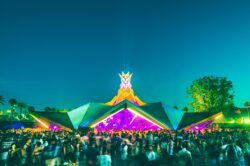 Thank you, bass god. Thundercat started late in the Mojave on Saturday, probably just because he was busy anointing his magic fingers for the show. When he took the stage, TCat was rocking his irreverent style with a gothic, cartoon-villain gargoyle headdress complete with horns, wings, gilded demon-skull shoulder pads and what looked like rondels made of shrunken nun heads. Despite the get-up, the virtuoso’s skills spoke for themselves as he slapped and plucked his six-string’s way through jams like “Heartbreaks + Setbacks” and “Them Changes.” Musician-comedian Reggie Watts joined Thundercat and his pair of bandmates (a pianist/synth player and a drummer) for a few vocal riffs, but his mic was off through the first chunk of his performance. Some more sound issues affected the set, such as the low ends of the bass being too high and drowning some other sounds out, but the remarkable skill and gusto on display compensated. Thundercat wound down with a medley of songs he helped produce for other artists, leading Flying Lotus’s “MmmHmm” into Kendrick Lamar’s “Complexion” and back again.

One of the most impressive acts to inaugurate the new Sonora tent was a punk act out of Rhode Island called Downtown Boys. Their performance burst with radically political energy, with lead singer Victoria Ruiz calling for the redistribution of power and wealth and the end of white supremacy in between her bouts of wild shaking, bouncing and bilingual chanting of songs like “(Brown and Smart)” and their sax-heavy Springsteen cover “Dancing In The Dark.” As their Saturday set of weekend two coincided with Earth Day and the March for Science across the nation, the band led a small march of their own “toward the phallic-looking sculptures and back.”

On Saturday night, the Yuma tent hosted a superset with pro DJs Floating Points, Daphni (aka Caribou) and Four Tet. The three spent time mixing and trading off at the helm, experimenting with each other’s beats and basslines to make new permutations of house for the lab mice in the crowd to boogie down to. All three are modern powerhouses of the genre in their own right, so their collaboration proved a pleasure to shake it to.

Like the man of the hour, Kendrick, would later on Sunday night, DC rapper GoldLink tore down the lamely common discussion of whether live rappers can put on a good show. GoldLink hosted a party in the Mojave, starting with a few songs of his own in front of flashing traffic light props before MCing a breakdown of age-old hits to bring up the hype level, including hitting a mean air guitar riff to “Smells Like Teen Spirit.” Link wasted no time getting right back to “the regularly scheduled programming,” performing “Late Night” with Masego and “Some Girl” with Steve Lacy, who went on to perform his own song “Ryd.” It was a good weekend for Lacy, the guitarist of The Internet, who would later be given a shoutout by Kendrick himself after his performance of “Pride,” which Lacy co-produced. 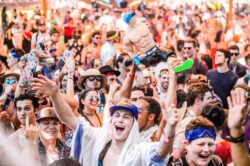 Like in Justice’s flawless set the following night, you could feel the Franco-groove DNA Breakbot shares with Daft Punk flowing through their showstopping performance in the Gobi. Though Breakbot is technically the solo project of Thibaut Jean-Marie Michel Berland, the full band that joined the leveled tiers of his picturesque stage set-up filled out the lush, energetic sound of his songs. Vocalists Irfane and Yasmin matched and cranked up the vigorous boogie of their audience, maintaining crystal clear vocals while dancing in step with the guitarist and bassist. Yasmin and Irfane (in his salmon pink suit matching Berland’s all-white one) balanced the stoic expertise of Berland on the keys, and by the time they broke into their hit “Baby I’m Yours,” everyone in the crowd had tossed their inhibitions off like the sweat on their brows.

One of the most anticipated performers of the weekend, legendary composer Hans Zimmer brought “a cello concerto to the desert,” and then some. With over 30 people on stage, including a full orchestra and choir, Zimmer led the Outdoor audience through intricate arrangements of scores from movies like “The Lion King,” “Pirates of the Caribbean” and “Inception.” Though perhaps not everyone in the festival crowd was ready for Cellochella, as depending on where you were standing the people around you might’ve continued their roaring babble over the performance.

The act that everyone was waiting for all weekend blew Coachella away on Sunday night. Kendrick Lamar, indisputably the greatest rapper of our time, had an easy go cementing his pinnacled place in not only the game but in his genre, his art and his work. Decked out in matching black-and-white Chinese martial arts uniforms to fit the Kung Fu Kenny persona carried through DAMN., he launched mercilessly into cuts from the new album and classics alike. Lamar rapped “DNA.,” “XXX.” and “ELEMENT.” with as much finesse and precision as “Backseat Freestyle,” “untitled 02” and his remix of “Bitch, Don’t Kill My Vibe.” The weekend two crowd was privileged with a little more time to learn all the new lyrics. Kendrick interluded his show with campy, old-school style clips of Kung Fu Kenny on a mystic journey for ass and self-realization. The commitment to the (slightly questionable) character puts Kendrick in the frame of an artist with eras, phases of a long and storied career.

But Coachella is also about the art (guys, it’s, like, in the name).

The Antarctic, a “360° audio-visual sensory experience” by San Francisco studio Obscura Digital, was easily one of the most landmark attractions (musical or otherwise) to hit the fest in years. Known for large-scale projection mapping projects on canvases like the Empire State Building and St. Peter’s Basilica, the Obscura team brought the display of their show to the desert. Audiences filled up an air-conditioned dome for a planetarium show tricked out with innovative computer graphics tech and tripped out with breathtakingly morphing psychedelic imagery. It launched viewers up out of the desert Space Mountain-style, into intricately dreamlike landscapes with floating shapes, both organic and geometric, until eventually blurring the lines between the two past the point of differentiation. This breaking down of the barrier between the natural and the mathematical was appropriate in a space so simultaneously rawly human and exhaustively digitized as Coachella. 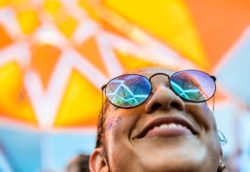 The Antarctic revived the kineticism of Coachella art, which was missing on the field this and last year, in the digital zone (it acknowledged this self-referentially by folding into its fourth-dimensional collage some iconic figures of years past: the caterpillar, butterfly and spaceman that moved across the grounds like giant floats). This forces the question of how much of the festival, and how much of our lives, exists within the digital space and to what degree we consider that part of an objective sense of reality. There was, appropriately, a lot of heady stuff in all those planes of color and fractals. Said one UCSB third-year, “From now on, whenever I trip I’m gonna call it ‘going to the Antarctic.’” However, he was upset that after hitting the dome three times in one day he “still never got uploaded to the singularity.”

“Is this what brings things into focus?” is the name for the boxy herd of multi-patterned creatures that populated your Instagram feed this week. They were built by U.K. artists Joanne Tatham and Tom O’Sullivan. In person, these grazing six-story monsters were much more towering than photos could do justice to, playing with the scope and perspective of an actual event and the hyper-documentation of it. Compounded with the outward expansion of the festival’s grounds, these monumental sculptures gave one a tilt-shifted impression of their small space on the fields. No matter how big you look in that photo, at Coachella you’re a drop in a wave.