The Daily Nexus
Sports
Behind the Seams: SDSU’s Chad Bible Won’t Allow Cancer to Strikeout His Dreams
April 27, 2017 at 5:09 am by Austin Cole 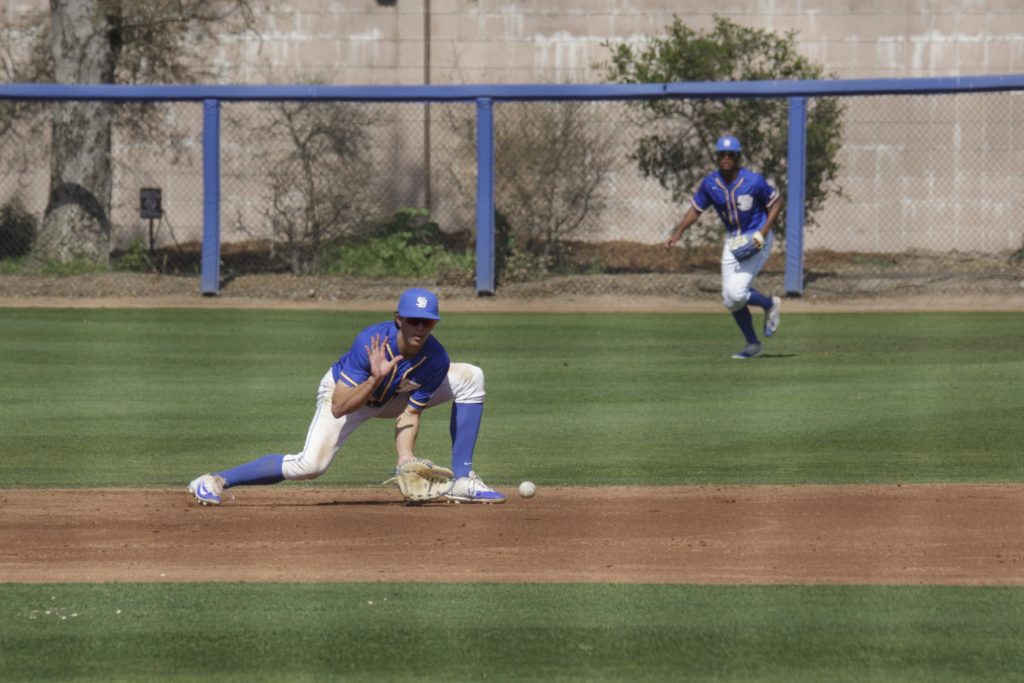 As it rolls through the infield, Colton Burns stays behind the ball. Dustin Harris / Daily Nexus

While UCSB baseball hosted and dropped two out of three games this last weekend to an impressive San Diego State Aztecs team,UCSB junior second baseman Colton Burns believes he understands what has motivated the Aztecs to turn it around this year.

A former high school and junior college teammate of Burns, junior SDSU outfielder Chad Bible was set to start his first full Division I collegiate season, but on January 10, 2017, just before the season got under way, he was diagnosed with Hodgkin’s lymphoma.

“We had this weekend circled on our calendars to play against each other for the first time,” Burns said. “You would never wish the timing of something like that to happen to anybody, but it fires me up to see that the guys over there have rallied around him so well this season.”

Last year Bible became one of the most highly scouted prospects in California after leading the state in home runs and RBIs at the junior college level. But even during that impressive season, he says, he could tell something was wrong.

“I woke up one day last May and had this lump in my neck,” Bible said. “The doctor said it was normal for kids my age to get inflammation there sometimes, so because of that and the way I was playing, I just never thought anything of it.”

However, more lumps would appear throughout the summer as he geared up to transfer from College of the Canyons to SDSU for the fall semester. Bible even admits that his girlfriend grew annoyed with him during the summer because all he wanted to do was sleep after games.

Bible’s dad, Mike, also stated that he always had concerns, adding, “It just never felt right to me from the beginning, and it wasn’t until the third or fourth check-up where they said, ‘I think it’s a waste of your time to get another scan’ that I started to believe it was nothing to worry about.”

Luckily, Bible told a trainer at SDSU, who referred him to the team doctor. Other tests were done, leading to the biopsy in December of 2016.

Then came the news that he had cancer. 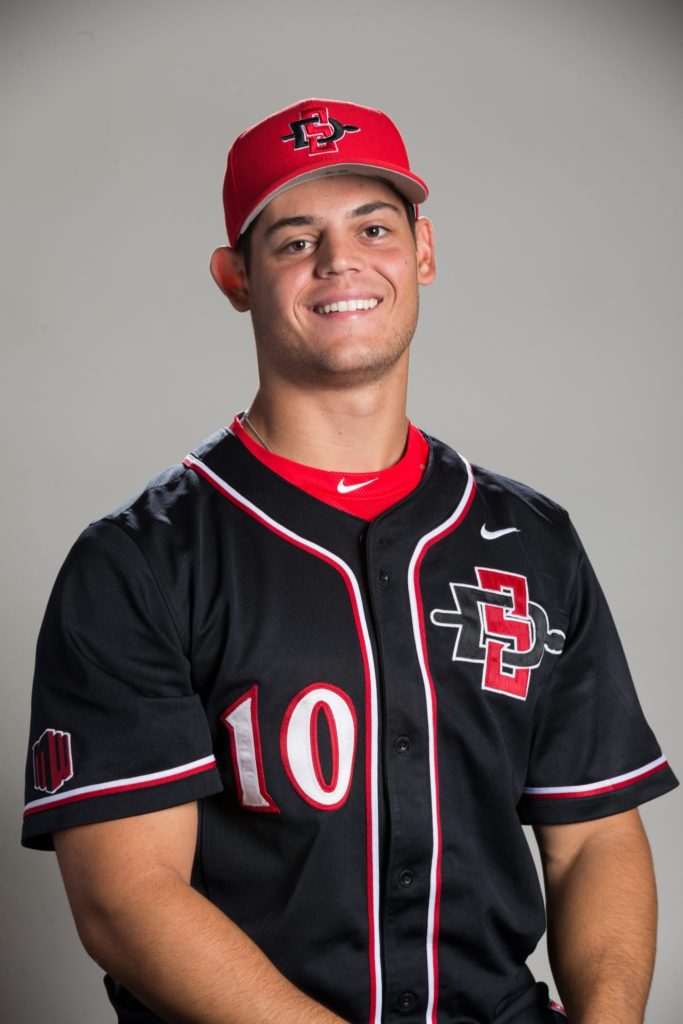 “I didn’t really hear anything after the doctor said ‘cancer,’” Bible said. “But after they went into detail that I would have to drop out of school, quit playing baseball and move home for treatment, all I asked was that we started treatment the day after playing Fullerton.”

After getting the reluctant “okay” from the doctor, Bible said, “That was so huge for me to be able to do that and to not see all this work I’ve put in over the years go to waste.”

Getting a chance to play Fullerton was another contest circled on Bible’s calendar from a long time ago because it was the university that he attended out of high school. He redshirted his freshman year there, then transferred to College of the Canyons, before finally landing himself at SDSU.

When looking back on it, Bible uses humor to downplay the situation.

“I got along great with those guys at Fullerton, and I’ve never been a cancer in the clubhouse,” he joked. “But for whatever reason, the coach and I there just never saw eye to eye.”

Through the first five games of the season, Bible batted clean-up for the Aztecs, eager to prove to himself and his former Fullerton coach that he could play at the Division 1 level.

On February 22, 2017, Bible went 2-for-4 in a Wednesday night matchup versus the Fullerton Titans, which would improve and conclude his batting average at .318 for the season, as he would begin treatment the next morning.

With each ensuing inning, things grew more emotional at Fullerton, though few in attendance knew it. Each time Bible stepped up to the plate, his family could be seen taking pictures of each at-bat behind the SDSU dugout, wiping away tears in the process.

The Aztecs went on to earn a 5-4 victory that night following a save by SDSU closer CJ Saylor, who gave the game ball to Bible.

Knowing he would be making his way to start his first round of chemotherapy at the City of Hope in Los Angeles just five hours later, Bible received a hug from each of the Fullerton players in line for handshakes. Some he knew and many he did not, but all were deeply moved by his story.

Bible’s dad recalls the moment as the most emotional one of his life.

“It wasn’t about the logo on your hat or the colors on your uniform that night,” he said. “It was just a bunch of dudes showing love and respect for something bigger than baseball.”

Bible stated that the prognosis for him is great, adding that the survival rate is 90 to 95 percent. He has already gone through three rounds of treatment with five more scheduled every other week through the month of June. 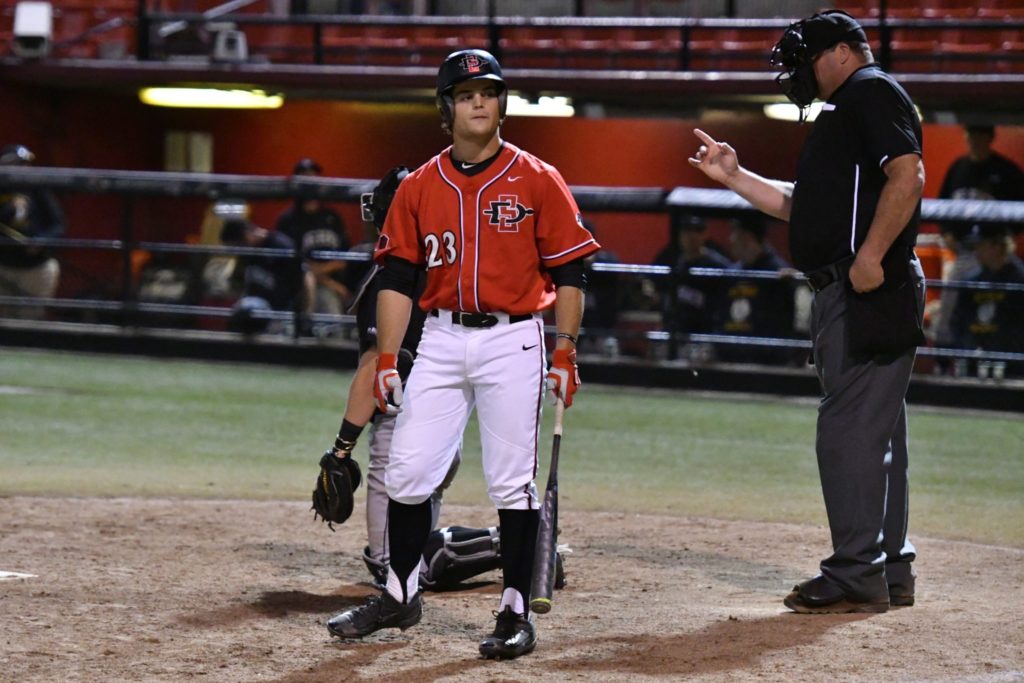 He says that he has developed hope from athletes who have walked in his shoes before, such as current Cubs first baseman Anthony Rizzo and pitcher Jon Lester. Both players were diagnosed with Hodgkin’s lymphoma during their careers and made full recoveries after their treatment. In fact, Lester was so moved by Bible’s story that he reached out via text during his treatment.

“I just want to be an inspiration like those guys,” Bible said. “I mean, people can feel bad, and that’s all fine and dandy. But what I really want is for people to see me smiling, fighting cancer or playing baseball and ask themselves, like, ‘Wow, what’s my excuse?’”

Before the Aztecs began accumulating a 29-12 record this season, a major turnaround from last year’s disappointing 21-win season, SDSU pitcher Dominic Purpura came up with a way to pay tribute to Bible throughout the season in a form inspired by their offseason Navy S.E.A.L. training in Coronado.

Purpura had dog tags made for both the players and coaches, who each received two tags. One tag is personalized with the person’s name, while the other tag reads as follows:

“TG19 DTR,” in honor of the former head coach Tony Gwynn, who passed away, and his slogan “Do things right.”

And below is a nod to Bible, with his initials and number.

“To be honest, I just started crying,” Bible said. “It meant so much to know that this fight that I am going through is not all for waste, and I couldn’t thank Dom enough for that.”