During the past week, the Santa Barbara Bowl has become a pre-game destination before propelling to Coachella. Two of these Coachella acts who paved their way to the SB Bowl were summery, synth-heavy alt-pop acts Grouplove and Two Door Cinema Club. Jack Garratt, Grouplove and Two Door Cinema Club used their enthusiastic presences to entertain an amphitheater of dancing wine moms, and college kids who wanted to re-live their Tumblr indie years. The lineup of performers unleashed their stellar sets without the inconvenience of the Indio dust in your eyes at the SB Bowl last Friday, April 14.

The first act of the night, Jack Garratt, swooned the audience with looping effects — his method of capturing a multi-instrumentalist dynamic without having a band to join him. Garratt’s wholesome, artistic quality was displayed through his performance of “Worry,” which illuminated his ability to control the blending of electronic soul and pop production aspects to hit and sing the lyrics with heartfelt falsettos, in which his deeply-rooted sentiments could be felt throughout the crowd of 4000 concert-goers. A tender performance of “Surprise Yourself,” led to people closing their eyes out of pure euphoria and basking in the singer’s vocals that parallel those of a church choir.

Charging up the stage with their monumental energy, Warm Up alumni Grouplove performed their radiant hits, allowing the audience to stand up from the foot-tapping, chair-laden positions they assumed during Garratt’s opening performance. Grouplove’s first song, “Borderlines and Aliens,” is a single from the 2013 album Spreading Rumors and allowed the swaying crowd that was warding off its momentum to dance a jolt of necessary energy. “Borderlines” was the punch the crowd desperately needed to grow used to the energy required to sing along to Grouplove’s adrenaline-filled songs. 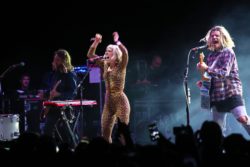 Grouplove became the espresso shot of the night that allowed the amphitheater to awaken its senses. A collective applause was heard and pretzels were put down for a couple of seconds once people reacted to hearing the first chords of Grouplove’s well-known hit, “Tongue Tied.” The triumphant look of happiness was visible on everyone’s faces, and the contagious spread of smiles was clear. For that moment, the audience was able to forget their worries about getting out of the Bowl’s treacherous parking lot and merely place their focus on a band that exudes joy.

Hannah Hooper, one of Grouplove’s lead vocalists, shouted into the crowd, “Heavy shit happens, we’re all going through that shit. Life is beautiful, it can be a fantasy. This is what Grouplove is all about. Welcome to your life!” The band then launched into their hit single, “Welcome to Your Life”.

Hooper’s husband and fellow vocalist of Grouplove, Christian Zucconi, crowd-surfed into the pit during the performance of “Ways to Go,” yet only ended up about three inches away from his original stage spot. To wrap up their performance, Grouplove chose to close their set with a song that single-handedly represents the band’s vibrant aesthetic, “Colours.” The anthem, which called for the back-and-forth swaying of arms, ended the band’s set list of happy tunes.

The brief 30-minute intermission between Grouplove and Two Door Cinema Club’s performances allowed for the crowd to reunite by collectively singing to 50 Cent’s “In Da Club” and dancing sporadically to R. Kelly’s “Ignition.” 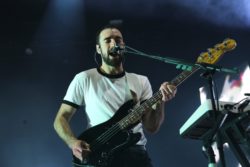 Club, a Montecito wine mom sat next to me. She then let me in on the reason why she was attending this particular concert: “Man, I feel old here, but I’ve loved [Two Door Cinema Club] ever since my son showed me their song ‘Sleep Alone.’” Then, a stream of blinding lights that should have come with a warning label began to mercilessly shine into the eyes of the audience, indicating the time we were waiting for was near.

Two Door Cinema Club opened their set with the percussion-based song, “Cigarettes in the Theatre.” The claps heard in the instrumentation of the second song were undeniably recognizable; they marked the band’s performance of “Undercover Martyn,” one of their beloved pop masterpieces, which has achieved 56 million streams on Spotify. Despite the song’s theme of social isolation, the intensified energy was felt within the crowd. A sense of community could quite literally be felt throughout the arena in the waves that rippled from the back of the crowd to its tip. 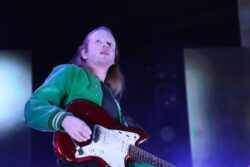 A glimpse into the vibrant aesthetic behind the band was displayed through the projected fluorescent light spectrums on the seven pillars behind them. These pillars were not just a mere background to the band, but they also provided an art background that pleasantly accompanied their music. The audience was bathed in lights across the color spectrum from purple to neon blue, which symbolized the theme of the band’s latest album, Gameshow. The track “Bad Decisions,” best known for playing within a scene of the 2016 film “The Edge of Seventeen,” illuminated the interplay of guitar and synth melodies.

Two Door Cinema Club finalized the night with an encore of their biggest hit in their catalog, “What You Know,” and gave an a capella rendition of the fan favorite.

In an era where many are often afraid of not capturing every moment on Snapchat, there were rarely any phones in sight during the Two Door Cinema Club show. The crowd was completely invested in living in the moment rather than prioritizing the preservation of such moments. Crowd-pleasing performances were the center Friday night at the Santa Barbara Bowl, giving the acts and audience alike an appetizer before the feast of Coachella.

Totally agree with your assessment of Jack Garratt’S performance. If you haven’t seen him live check him out as soon as you can!