The final game of the regular season is upon us, and in it, the UCSB women’s tennis team will face off against its bitter green rival, Cal Poly, this weekend. 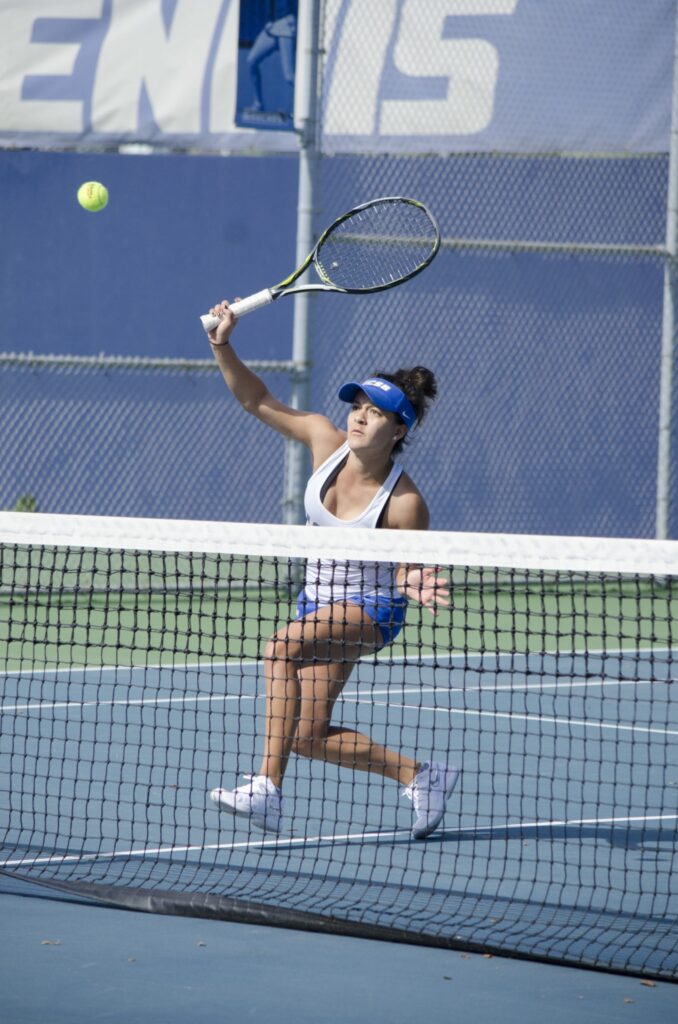 The Mustangs travel to Santa Barbara for their final match of the season, holding a 4-13 overall record and just a 2-5 conference record ranking them in seventh place in the standings. Santa Barbara hosts having won six straight matches and currently boasts a 13-9 overall record and a very positive 6-1 Big West record, netting them the No. 2 seed come next week’s conference tournament.

Despite having the No. 2 seed locked up, Santa Barbara still has a lot to play for, as with a win this weekend and a Hawaii loss, UCSB will claim a share of the regular season conference crown.

The 2017 women’s tennis installment of the Blue-Green rivalry looks to be an exciting one as the Gauchos are looking to maintain their perfect month of April and beat the Mustangs for the third consecutive season.

The last victory for Cal Poly in the women’s tennis Blue-Green rivalry came in 2014, when the Mustangs won against the Gauchos 4-3. UCSB has three players returning from last year’s win against Cal Poly: Natalie Da Silveira, Jaimee Gilbertson and Melissa Baker, who are all looking to have another great showing in this rivalry matchup.

Cal Poly is currently seventh place in the conference with a record of 2-5. Despite the poor position of the Mustangs, it is no guarantee that this will be an easy victory for UCSB; Cal Poly has had the best month of the season in April with a record of 2-2.

One positive: the Mustangs were victorious in their last game against UC Riverside last week, winning at a score of 4-3. In the match, Cal Poly was able to clinch the doubles point and the match victory overall, despite taking three consecutive singles matches late in the meet. The close victory came for the Mustangs after suffering a deflating 4-0 loss to the Long Beach State 49ers during which no Mustang won a match, singles or doubles.

The solid performance against Riverside may not be too good of an indicator of level of play for UCSB, as Cal Poly has been unable to perform well against the other top teams in the conference such as Cal State Fullerton and Long Beach State.

Coming off of a weekend during which the Gauchos beat those two exact teams, the comparison between UCSB and Cal Poly in this match clearly favors the Gauchos winning the meet again. However, the Mustangs may be motivated to play well, as this is the final regular season chance for bragging rights in the rivalry.

Players who are currently on a hot streak for the Gauchos are Palina Dubavets, Natalie Da Silveira and Amanda Atanasson. These players have been playing exceptionally well in the month of April, as Dubavets won all of her matches, both singles and doubles, in her last two matches against top competition. Da Silveira won all of her singles matches and one of her doubles matches against the same opponents. Atanasson was able to come back in last weekend’s meet against Long Beach State after losing the doubles match to begin the day.

In the case of Dubavets, she was recently awarded her second Big West Women’s Tennis Athlete of the Week after defeating Long Beach State’s Maeva Razakasoa — a two-time Big West Player of the Year — in singles last week, helping UCSB take the victory over LBSU 4-2.

No win comes easy for any team, especially in a rivalry match like this one. The Blue-Green rivalry spans between all sports, and with all that’s on the line for the Gauchos, chances are they won’t be taking things easy come Saturday.

UCSB takes on Cal Poly at 10 a.m. on Saturday, April 22 in Santa Barbara at the Rec Cen courts.