The Daily Nexus
News
It’s a Long Haul for Carbajal as a Minority Congressional Democrat
April 18, 2017 at 8:46 pm by Maura Fox

Congressman Salud Carbajal visited Corwin Pavilion Monday night for a town hall, where he addressed attendees’ concerns about the current state of politics and his plans to combat President Donald Trump’s rhetoric and legislation. 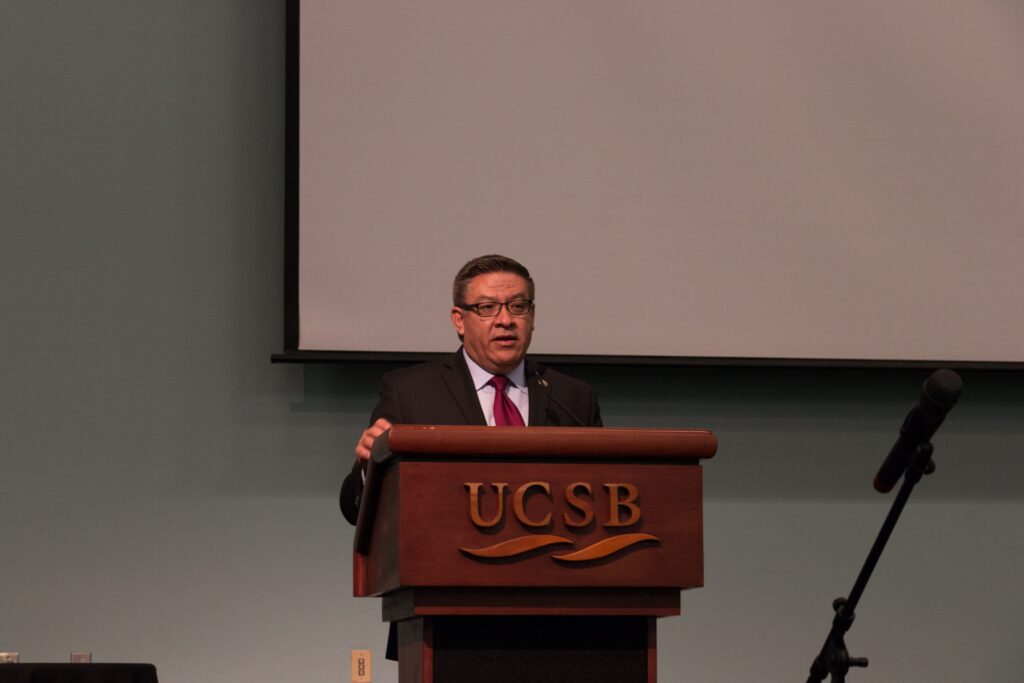 Congressman Salud Carbajal spoke at UCSB on Monday about the difficulty of passing Democratic legislation in a Republican-majority Congress. Anthony Lai/Daily Nexus

Carbajal expressed hesitant hope for progressive legislation under the Trump administration but attempted to ensure the town hall attendees that he would do what he could despite being a Democrat in a Republican-majority congress.

The congressman has sponsored or co-sponsored over 60 bills since being elected to Congress in November and said 25 of the bills have been bipartisan.

“I still believe there’s always room for collaboration,” he said, despite the currently divided political climate.

The town hall, hosted by the Associated Students Environmental Affairs Board, was divided into three sections of discussion: the environment, education and immigration. Many of the attendees’ concerns focused on how the Trump administration’s new and proposed policies would impact these issues.

Carbajal addressed a student’s question regarding how he would combat the president’s budget cuts to the Environmental Protection Agency’s office of research and development. He said he would continue to “speak out” against harmful legislation.

“The reality is that I am in the minority party right now, and one party controls both chambers of Congress and the White House,” Carbajal said. “So what we can do is put forth legislation, which oftentimes cannot move forward, and develop bipartisan support to bring it forward for a hearing to bring it to the floor.”

Carbajal went on to address college tuition hikes and the advent of paying off student loans after graduation. The congressman, a UCSB alumnus, said he still has not paid off all his student loans.

Carbajal said he has supported an appropriations bill to increase the Pell Grant and make access to the grant year round. He also said he wants to work on lowering the interest rates attached to student loans.

“The interest rates … are really high, and I think we need to stop the profiteering by certain financial institutions on the backs of students trying to get a college education,” Carbajal said.

Carbajal addressed the issue of immigration last, sharing that his father immigrated to the United States from Mexico back “when immigration worked.”

He said the immigration system no longer works and needs comprehensive reform and the creation of a clear path to citizenship.

Carbajal said it is challenging to introduce Democratic legislation in the current Congress because oftentimes Republicans block the legislation from moving forward to the floor.

He said, however, that constituents still can influence policies when they vocalize their concerns, noting the way the Republicans failed to pass their alternative to the Affordable Care Act.

“I remind you that when you believe in these issues and sometimes feel a little powerless and you question whether your advocacy … works, look what happened with the Affordable Care Act,” he said. “That happened because people spoke up.”