Epicurus was an ancient Greek philosopher who lived from 341 BCE to 270 BCE. Many philosophers before him and certainly after thought about what it is that makes people good. Epicurus, however, was more interested in what makes people happy. People accused him of all sorts of debaucheries. They spread wild rumors that Epicurus’s school hosted feasts every night, had orgies and that Epicurus had orgasmed 18 times in a single night in a bed full of virgins. There is no historical evidence for this, but the romantic in me might want to believe it’s true. In reality, Epicurus and his team were studying happiness, but they weren’t doing it through hedonism. At least, not the sort we usually think of.

Epicurus believed the task of philosophy is to act as a sort of therapy for life. He held that philosophy that does not heal the soul is no better than medicine that cannot cure the body. To this end, he came to two perhaps counterintuitive conclusions about happiness and the mistakes we tend to make when thinking about our relationship to it. Even during the time of Alexander the Great, Epicurus and many of his contemporaries found the very concept of romantic love and even marriage dubious. 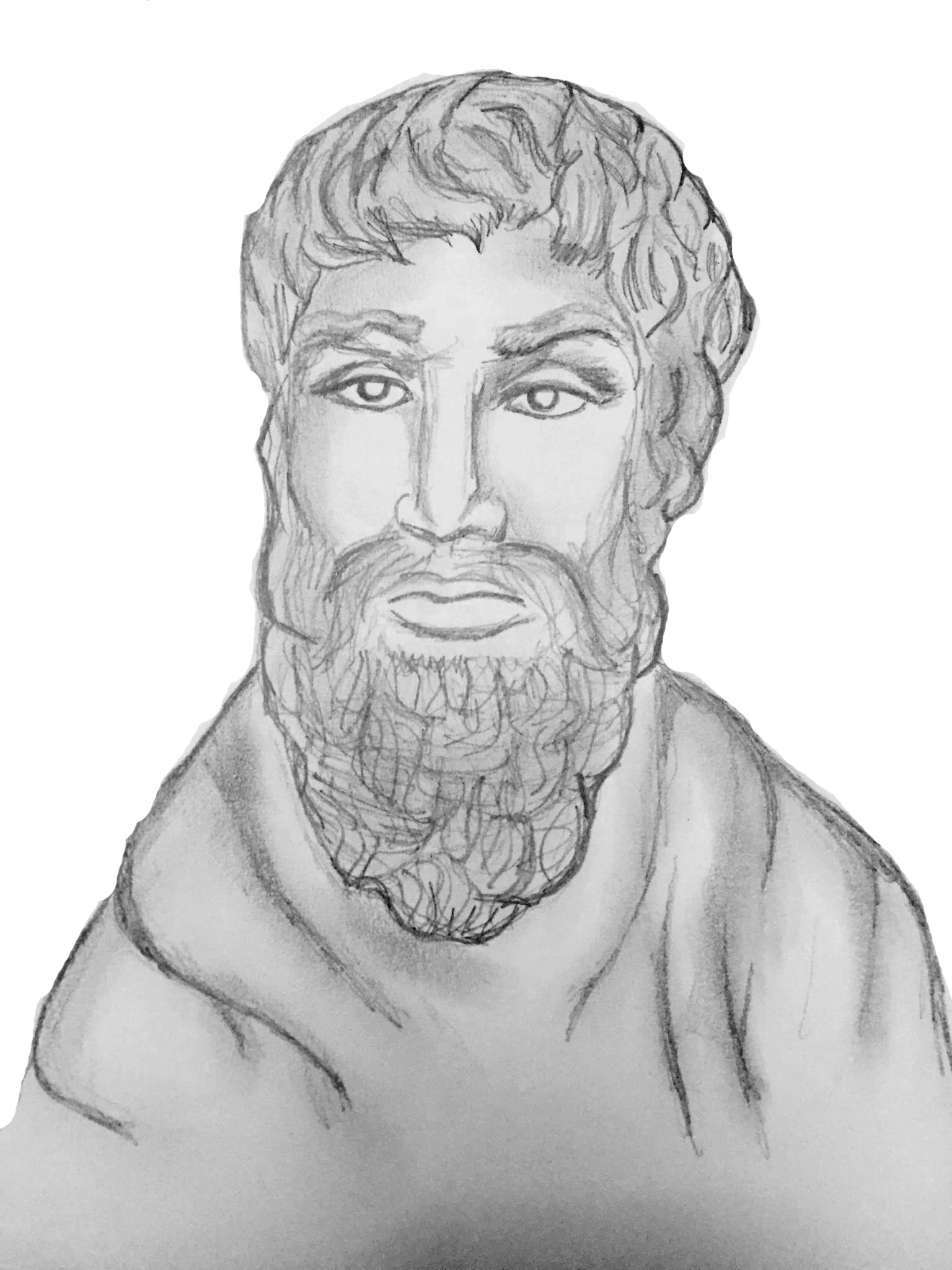 First, we tend to think that happiness necessarily involves deep and intensely romantic, sexual relationships. Epicurus, however, noticed how intense the pleasures of sexual and romantic relationships are and it is precisely because of this that they can often be usually more harmful than pleasurable. For my freshmen friends who are just becoming acquainted with I.V. and the abundant potential for these sorts of relationships, Epicurus said this to the young son of one of his followers:

You tell me that the stimulus of the flesh makes you too prone to the pleasures of love. Provided that you do not break the laws or good customs … you may indulge as you please. Yet it is impossible not to come up against one or the other of these barriers, for the pleasures of love never profited a man and he is lucky if they do him no harm (Life of Epicurus, Oxford).

Clearly, Epicurus is no fan of romantic love, and though we may not like to admit it, he might have a point here. More likely than not, most of us, if not all, have been hurt in one way or another by someone whom we had intense romantic feelings for. If we are single now, then the relationship probably didn’t end as we had hoped. If we are currently in a relationship, statistics show it’s not likely to last, and when it ends it will probably end us in emotional ruin. Epicurus calls the pleasures of love “natural, but unnecessary.” Yes, we have a strong drive to reproduce, and hormones mess with our brains almost daily, but according to Epicurus, we don’t need to subject ourselves to this kind of pain. He suggests we pursue true, strong friendships instead.

Many of us work long hours for a job we hate because we want to have fun, but Epicurus would say pleasures like these are both unnatural and unnecessary, and thus, wise people would avoid them.

Epicurus observed friendship seemed to be where human nature was at its sweetest. People seem to be so decent and un-possessive with their friends. In fact, Epicurus considered friendship essential for a happy life. Contrast this with love and romance, which Epicurus suggests we avoid. Of friendship, he said, it “goes dancing round the world, announcing to all of us to wake up to happiness” (Vatican Saying (VS) 52). Epicurus held that a wise man would feel the torture of a friend no less than he would feel his own and would die for a friend rather than betray him, for otherwise his own life would be confounded (VS 56-57).

If we take Epicurus’s advice to heart, we should stop putting so much emphasis on that girl or boy we like, stop thinking about our future lives together, stop listening to sappy music, forget about stupid love quizzes on Facebook and under no circumstances take the advice of so-called relationship experts on TV. Forget all of that. Focus on what is really important: our family and our friends. They are the ones who are really there for us, the ones who really care about us, who actually get us. In return, we should work on being better friends to them so that we might be the sorts of friends who would die for the people closest to us and be worthy of this kind of love as well.

Second, Epicurus saw that people work incredibly hard to get money. If we think about it, that’s why we’re all here, right? To gain the skills to be able to make a decent living for ourselves. How many articles from Forbes or Business Insider have we seen about the top 10 college majors that make the most money or some other related nonsense? Epicurus reminds us to ask ourselves why we want money in the first place. “Because I want to afford nice things, I want to be financially secure and be able to eat,” we might reply. Absolutely. But Epicurus would say that if we want to be financially secure and be able to eat, along with having other necessities, we don’t need to work nearly as hard as we do. This was a man who owned only two cloaks and ate only bread, cheese, and olives. His point is that we can afford good food even if we are not rich; we can afford clothes, we can afford a home (albeit a modest one) and we don’t need to work 80-hour weeks or earn six-figure salaries in order to do it. Many of us work long hours for a job we hate because we want to have fun, but Epicurus would say pleasures like these are both unnatural and unnecessary, and thus, wise people would avoid them.

Epicurus said if we want a secure home and to be sufficiently clothed and fed, we don’t need to work as hard as we do. In fact, we likely already have these things. Many of us certainly want more; I know I do. Epicurus, however, advises us to let go of these unnatural desires and think about what really makes us happy, such as hanging out with our true friends and doing work that actually fulfills us. We want to feel like our work is actually making a difference that it matters to someone. This is what makes our work worthwhile. When we let money become the major deciding factor in what we choose to spend the vast majority of our time doing, we are making ourselves much more likely to be miserable. If our goal is to have a high-paying but stressful job in order to have nice things and go on exotic vacations, we are forgetting that the vast majority of our time will be spent in this terribly uncomfortable situation. This essentially defeats the entire purpose of making all of this money in the first place, with which we only really enjoy on the weekends and maybe two weeks a year for vacation. I tend to agree with Epicurus that this makes no sense.

Epicurus has a rich philosophy of ethics, happiness and science as well. I really encourage anyone who enjoyed this article or even partially agreed with it to research him and his life for even more insights, as I’ve only barely scratched to surface of a body of work that is still helping people today and has personally helped me immensely.

Brian Wheat wants you to get with the Greeks to explore the meaning of happiness.

Epicurus was/is right. I spent far too much of my life devoted to making money. By the time I retired with a fair amount of money, tragedy had struck and prevents me from enjoying the wealth. If the life of your dreams requires a long wait and lots of money, you’ve got the wrong dream.

Love it, is a good read. This is the Philosophy for hapiness, agree with his direction of thinking.
Love Epicurus

FYI, this article was linked-to from the FB Stoicism group. I’m glad I found it–it’s a nice summary/introduction to Epicurus. Thanks.

You are right,having a group of understanding faithful loyal friends to fellowship with makes living your life on earth most meaningful and worthwhile. Be wise though to choose the correct friends!