Heading into the weekend on the heel of a 2-1 series win over UC Riverside, the Gauchos repeated their winning effort, beating the Cal State Northridge Matadors two games to one in the weekend series hosted by Santa Barbara, with triumphs of three and four to nothing and a 6-1 loss.

The first contest between the teams on Friday afternoon, a 3-0 victory for UCSB, saw Gaucho sophomore pitcher Veronika Gulvin throw an outstanding seven innings, allowing no runs on only three hits and two walks. Gulvin earned her 16th win of the season with the victory, a mark that has her ranked second in the Big West.

UCSB junior outfielder Jessica Johnston was the catalyst for much of the Gauchos’ offensive success. A third-inning single into center field put the Gauchos on the board, scoring fellow outfielder and senior Jacqueline Hinojosa, who had reached first on a bunt single earlier in the frame. 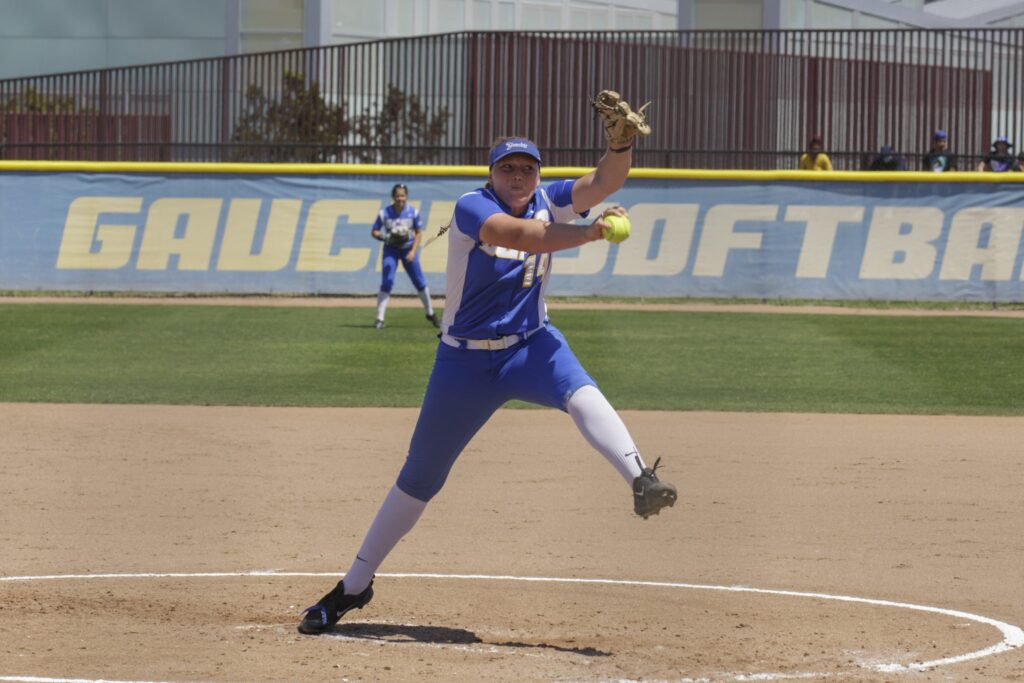 Sophomore infielder Sierra Altmeyer then hit home senior outfielder Kristen Clark, who was on base because of a fielder’s choice following Hinojosa’s bunt, giving the Gauchos a two-run lead.

Altmeyer struck again in the bottom of the fifth, adding an insurance run with a sacrifice fly to right field that brought home, Johnston.

CSUN was plagued by its four errors on the afternoon, and senior starter Daphne Pofek (senior) was only able to toss two and a third innings before handing it over to sophomore pitcher Taylor Troost for the remainder of the game.

The Matadors would avenge their opening loss, however, downing the Gauchos 6-1 in Saturday’s 1 p.m. matchup.

Despite throwing six-plus innings, Gulvin was unable to secure her 17th victorious result. CSUN knocked her around in this one, accumulating 10 hits, six runs (four earned), two walks and two home runs.

The Gauchos got on the board in the bottom half of the first, as Altmeyer batted in Clark for the second-straight game, this time with a rocket double down the left-field line.

A third-inning home run from freshman infielder Jessica Alexander swung the tide for the Matadors with the two-run shot that scored senior outfielder Taylor Glover (OF). Glover kept the momentum going in the fifth inning, scoring senior infielder Tara Kliebenstein on a sac fly to center field before Alexander smashed her second homer of the afternoon over the left-field fence.

The Gauchos had plenty more chances to score but were unable to capitalize on them, leaving four runners on base over the rest of the game. A pair of runs in the top of the seventh put the game out of reach for UCSB, evening the series at 1-1.

Sophomore Ashley Wright pitched a complete game shutout in Sunday’s second game, leading to a 4-0 Gaucho win that saw UCSB shutout the Matadors for the second time in the series. Pofek experienced her second loss of the weekend, as the top of the UCSB lineup was able to take advantage of the opportunities she provided once again.

After yet another hit from Altmeyer, a first-inning single to center that brought home Clark on an error, Johnston gave the Gauchos a firm foot to stand on with a three-run shot to right field in the third inning.

Wright carried UCSB the rest of the way, allowing only three more hits from the fourth inning onward and achieving her second credited win of the season.

The Gauchos now stand at 24-20 on the season (.545 winning percentage) and hold a 5-4 conference record. The two wins mark their 11th and 12th home victories on the year, a much more comfortable place for the team to play, as away games have not gone so well (3-7 record).

With those two leading the charge on offense and Gulvin (159 innings pitched, 12 complete games, 2.73 ERA) and Wright (2.72 ERA) holding it down for the Gauchos on the mound, UCSB has a clear path ahead to a very successful 2017 campaign.

The Gauchos will play next against Fresno State in a one-game series at UCSB at 3 p.m. Wednesday, April 19.