It was quite the weekend for the UCSB women’s tennis team, which saw it extend its winning streak to six games and climb to second place in the Big West Conference after wins against UCR and LBSU.

Since losing it’s final three matches in March, including its only conference loss against Hawaii, Santa Barbara has won all six of its April matches, five of which are Big West, and now boast a 13-9 overall record and a 6-1 conference record.

The win against the Long Beach State was particularly sweet for UCSB as it now is locked into the second seed for the Big West tournament set to take place two weeks from now.

Despite the 6-1 record, the Gauchos best finish can only be the second seed since Hawaii is a perfect 7-0 and even with a Hawaii loss and a UCSB win, the Rainbow Warriors would still hold the tiebreaker thanks to their 4-1 victory in Santa Barbara on March 30. 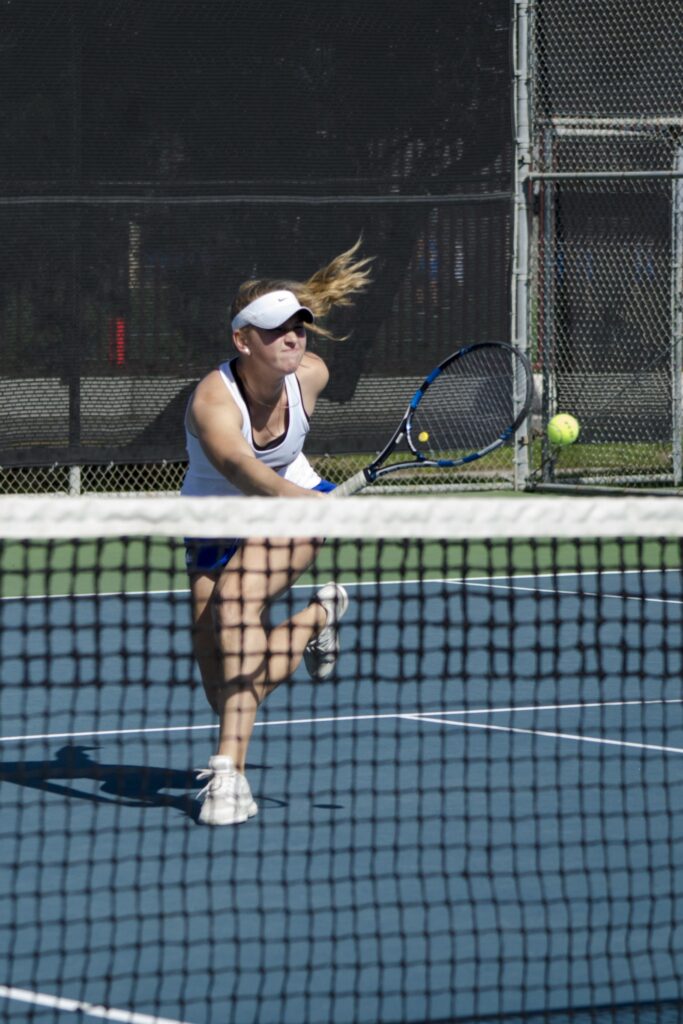 Palina Dubavets runs up to the ball and hits it over the net. Christina DeMarzo / Daily Nexus

The Gauchos‘ weekend began on Friday when they traveled down to Riverside to play the Highlanders. The meet began with doubles play in which the team of junior Amanda Atanasson and freshman Amit Lev Ari beat the UCR pair of freshman Sara Khattab and junior Natalie Penner 6-2.

Providing the clinching doubles points were junior Palina Dubavets and senior Melissa Baker who won their set 6-1 against juniors Karla Dulay and Tamilla Vaksman. The doubles play from UCSB has been outstanding as of late and has been one of the reasons the team has been so successful.

It was junior Amanda Atanasson who began the singles play action with a win against UCR freshman Lauren Wolfe 6-0, 6-0. Sophomore Stephanie Yamada was the next Gaucho to win in singles play during the meet, going 6-1, 6-0 against Vaksman.

Winning what would be the final match of the meet was Lev Ari who beat her doubles opponent, Penner, with a score of 6-2, 6-0. The remaining three matches featuring Dubavets, Gaucho junior Natalie Da Silveira, and Gaucho senior Jaimee Gilbertson were left to go unfinished, and the Gauchos won the match 4-0.

UCSB then traveled to Long Beach State for a Saturday meet with the No. 2 Big West team. The 49ers stared fate in the face, as the meet’s outcome would make or break their standing over No. 3 UCSB.

The Gauchos were left to try to rally. Beginning singles play with a victory for UCSB was Stojic, who won her first match of the weekend against freshman Helgo 6-4, 6-2. Atanasson continued the rally, picking up a victory against Munoz 6-0, 6-4. In what would be the third and final consecutive singles victory for the Gauchos, sophomore Yamada beat LBSU’s Eales 6-4, 7-5.

In what would be the third and final consecutive singles victory for the Gauchos, sophomore Yamada beat LBSU’s Eales 6-4, 7-5.

Putting a stop to the UCSB streak was Pacholski, who won her game against Gilbertson, 6-3, 2-6, 6-2. The opportunity to clinch the winning point and end the match fell on the shoulders of Dubavets, who has been a standout for the Gauchos all season.

It was a back-and-forth match between Dubavets and senior Maeva Razakasoa as the two each traded the first two sets. However, it was Dubavets coming out on top, winning the game 4-6, 6-4, 7-6. The meet ended with UCSB winning 4-2.

The match pushed UCSB past Long Beach State in the conference standings, and now the Gauchos are a game behind the University of Hawaii.ok The wins this weekend have continued UCSB’s perfect month of April, having won all six games thus far.

The Gauchos have one more match before the start of the Big West Conference Championships against rival Cal Poly Mustangs at home on Saturday, April 22, at 10 a.m. PST.