After an offensive onslaught in yesterday’s game in which the Gauchos took game one of the series from the Anteaters by a score of 11 to 3, the Gauchos continued to hit the ball hard Friday.

Despite hitting baseball after baseball on the screws all day long, the Gauchos bullpen would blow a five-run lead over the course of the final three innings allowing 6 runs leading to a UC Irvine 8-7 win to force a series-deciding match tomorrow afternoon. 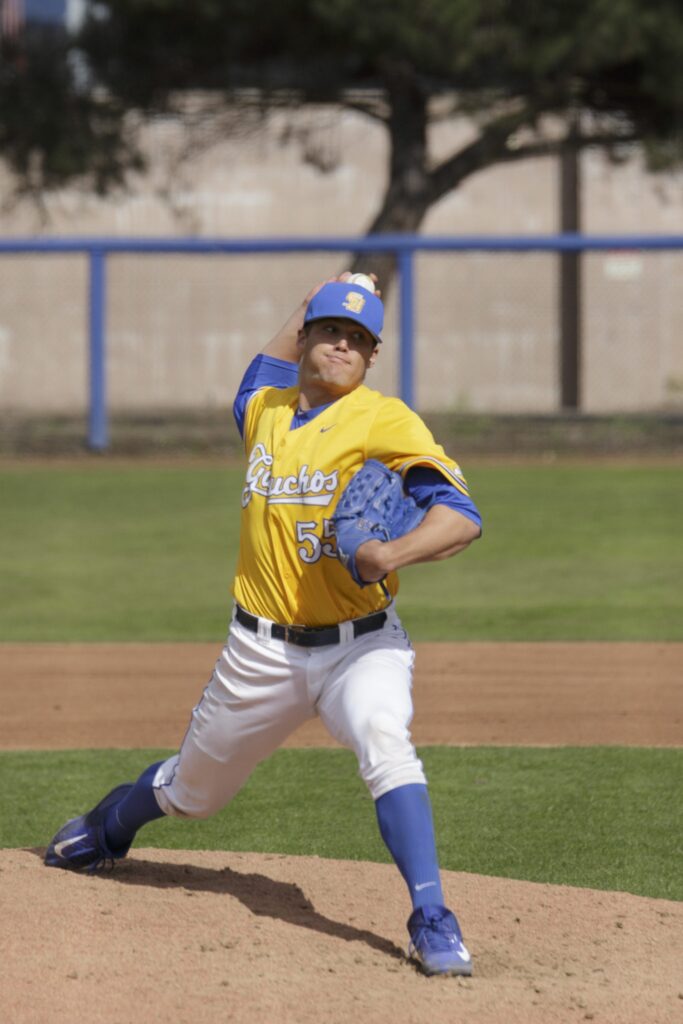 Winding up for the pitch, Joe Record keeps an eye on the batter. Dustin Harris / Daily Nexus

Irvine scored two runs early in the top of the third frame that began with a walk and an error from Gaucho junior third baseman Kenny Corey. With two on, Keston Hiura hit a laser shot into the right-center gap that would roll to the wall.

Hiura would bat in two runs on the stand-up triple. The Anteater DH continued to show why he should be the most feared hitter in the Big West by going 2 for 3 on the day with three RBI. Hiura’s Big West best batting average would improve to .405.

Kyle Nelson, the starter for the Gauchos Saturday, recovered well after giving up the triple to Hiura. He would lock back in and pitch three scoreless innings for UCSB.

Nelson, who gave up three home runs in his last start, pitched fantastic this time around, going six innings and giving up only one earned run while striking out five.

Gaucho bats picked up right where they left off from game one and continued to tee off on Anteater pitching. After scoring two runs in the 4th, UCSB would plate five more runs in the 6th. Per usual, the Gauchos would cash in on one big inning: on five hits, five runs would score.

Louis Raymond, the Irvine starter, in 5.2 innings gave up five earned runs on nine hits to the Chos.

Armani Smith, Tommy Jew, and Kenny Corey had the best day at the plate for the Chos. Smith went 2 for 5 with a double while touching home twice for UCSB. Jew would also have a multi-hit game, going 2 for 4 on top of cashing in a run with a knock up the middle in the 6th.

The Gaucho 3rd baseman Corey hit a ball past the diving shortstop Mikey Duarte in the 4th to score the first two runs for the Chos. Corey, who was 1 for 3, was also a centerpiece in a big play for UCSB.

In the 6th, Corey would lay down a sacrifice bunt down in front of home plate. Anteater catcher Alex Guenette would airmail the throw to first and allow Armani Smith to score while Corey hustled around the bases eventually making it to 3rd on the throwing error.

With all that run support and a more than solid outing from their starter Nelson, the Gauchos bullpen would dampen a beautiful day at the yard by giving up a five-run lead.

Kevin Chandler would first come in to relieve Nelson in the 7th. Chandler would have control issues walking one batter and leaving the ball up to three more allowing three hits which would score 2 runs for Irvine.

Next, Steven Ledesma would come in to relieve Chandler in the 7th. With two outs, Ledesma got the job done and limited the damage by striking out Alex Guenette.

The very next inning though, Ledesma could only get one out. After an Adrian Damla single and a Dailin Lee walk, Ryan Johnston would hit a ball to Gaucho shortstop JJ Muno.

The ball would hit off Muno’s glove and roll into left field scoring Damla. After the error, Head Coach Andrew Checketts would remove Ledesma and bring in freshman Chris Lincoln.

A few batters later, Mikey Duarte, the Irvine shortstop, would single to right-center scoring Lee. Both runs would not be charged to Ledesma, but regardless the damage was done.

The Gauchos, who at one point lead the game by a score of 7 to 2, headed to the top of the 9th barely hanging to a score of 7 to 6.  Chris Lincoln would come out to try to get the final 3 outs for the Chos.

Lincoln would start off the inning by hitting the Irvine pinch hitter Matt Reitano with a fastball on a 3-2 count. Next, Anteater 2nd baseman Cole Kreuter would single through the left side.

After a poor bunt by Adrian Damla that would move the runner to 3rd, but get the runner out at 2nd, Dallin Lee would hit a ball to the Gaucho shortstop JJ Muno. Muno trying to end the game on a double play threw the ball out of the reach for the second baseman Colton Burns.

The ball would roll to the right field corner, scoring one run for the Anteaters. With this error from Muno, UC Irvine completed the 5 run comeback in the 9th.

Runners on the corners after the error from Muno, Devin Pettengill hit a ball deep enough to left to score Adrian Damla on a sacrifice fly. From this, Anteaters took the lead 8 to 7.

In the bottom of the 9th, the Gauchos would not do much after a Colton Burns single to lead off the inning and a Billy Fredrick sacrifice bunt.

Austin Bush would fly out to left field and for the final out Armani Smith would strike out swinging.  UC Irvine closer Calvin Faucher would record his Big West-leading 9th save of the season.

“I think when you’re up 7 to 2, you should be able to overcome that with pitching. In my mind, we should overcome those. If we turn that double play with JJ (Muno) I think we might still be playing. It might be still a tie game. But again, I don’t think we did well out of the bullpen.” Coach Checketts continued, “I don’t want to throw any kids under the bus, you know, (the coaching staff and I) are responsible for it. We got to figure out who to throw out there in those situations.”

So far this year, the Gauchos have had a rubber match game in each one of their conference series but the team has been unable to win one. Let’s see what Saturday has in store for both of these teams trying to turn around their season.

Saturday, the Gauchos will take on the Anteaters for yet another rubber match conference game at 1 p.m. on Saturday, April 15th at Caesar Uyesaka Stadium.