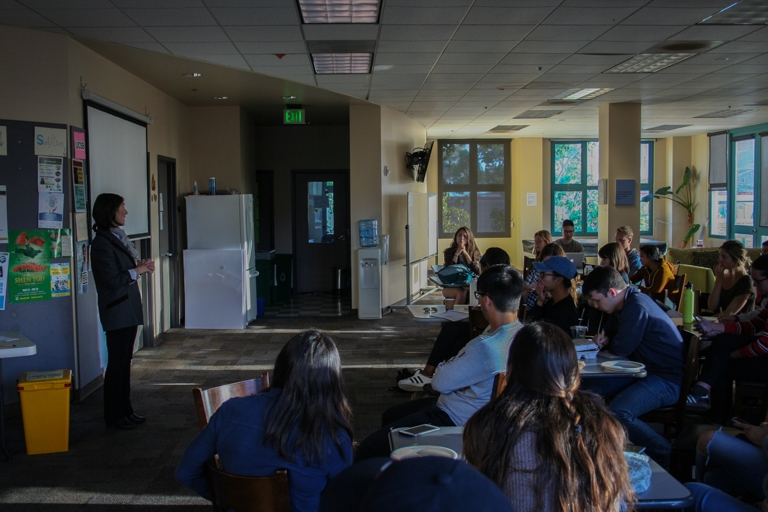 Supervisor Joan Hartmann addressed UCSB students’ concerns at a town hall in the MultiCultural Center. Among the topics discussed were parking and environmental activism in the face of stout federal opposition. Jose Ochoa / Daily Nexus

Hartmann was elected as Third District county supervisor last November, a district that encompasses the area from UCSB to the city of Guadalupe near Santa Maria. Since then, she has served as the Chair of the Board of Supervisors for three months.

Kevin Jin, a third-year economics and accounting major and chair of the A.S. Bike Committee, posed the first question, asking Hartmann if the county would make any efforts to reduce the density of cars in I.V.

Hartmann responded by stating that parking plans in the past have not been palatable for the community, and she is waiting for the I.V. Community Services District (CSD) to take any future steps.

Ethan Bertrand, the CSD board president, mentioned at the meeting that funding for the parking district is considered one of CSD’s biggest priorities. He said the board plans to allocate part of the CSD’s $200,000 budget to implement a parking plan.

Hartmann also mentioned that increasing the number of bike lanes would help incentivize people to use bikes instead of cars. She said increased registration fees for electric cars will generate additional revenue for the county to spend on I.V. infrastructure.

Representatives from Hartmann’s office were also present at the Q&A session. Gina Fischer, director for the Third District, addressed a concern about I.V. cliff erosion, which has displaced residents in recent months.

Fischer mentioned the county’s existing “bluff erosion policy” to monitor Del Playa properties that are susceptible to erosion. When a county inspector deems that a property is unsafe, or “red-tagged,” no one is allowed to occupy that property, she said.

Further, if the property seems close to being red-tagged, she said property owners must hire their own engineers to verify that their properties are safe.

Fischer added that there is currently a proposal to designate a Red Cross-approved campus facility to act as a shelter for students that may be displaced in the future. 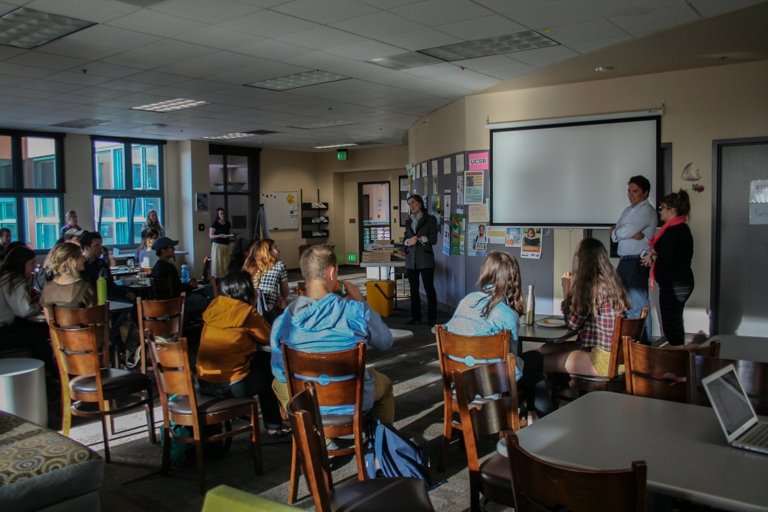 Supervisor Joan Hartmann addressed UCSB students’ concerns at a town hall in the MultiCultural Center. Among the topics discussed were parking and environmental activism in the face of stout federal opposition. Jose Ochoa / Daily Nexus

The event organizer, Rena Lahn, a second-year environmental studies, global studies and German triple major, said it’s important for students to go to events like these so they can be well informed on issues that affect the community.

“A lot of the issues she talked about do directly affect us,” Lahn said. “A lot of students don’t really find them that important because they are about long-term effects that don’t necessarily affect each and every one of us — since it is a transient community where we just move on — but I do think it’s important that we leave a mark behind.”

For Jeneva Diaz, a second-year sociology major, the session was an informative experience that allowed students to get involved at the local level.

“You kind of see the connection between our community, Isla Vista, with the greater Santa Barbara area…so you get this greater sense of community within the entire county,” Diaz said. “And specific problems she addressed, I.V. infrastructure, cliff erosion and transportation…[made the session] informative.”

The EAB will host another meeting with Congressman Salud Carbajal next Monday at the Corwin Pavilion.

Correction: A previous version of this article incorrectly said Santa Barbara County is looking into a proposal to build a Red Cross shelter at UC Santa Barbara. The proposal is not to build a physical shelter but to designate a campus facility that can act as a shelter.