UCSB students should study hard, carry themselves well and, for the love of God, please lose the party reputation. The community knows this, the staff knows this, we know this. Last Saturday’s hosting of heavy trap DJ RL Grime was a clear attempt to keep kids off the streets of I.V. during Deltopia; the students responded with immense praise. As the high energy, sold-out crowd and consequently empty Isla Vista can attest, the plan was a huge success.

Born with the less exciting name of Henry Steinway, RL Grime is an electronic music producer based out of Los Angeles. He blew up online in the early 2010s with his debut EP, Grapes, and his later hit remix of “Mercy” by Kanye West. Since then, he has risen to electronic superstardom amongst the likes of Flume and Major Lazer with his 2014 Void EP and, more specifically, his bass-heavy hits “Core” and “Tell Me.” He more recently was on the world-famous Coachella bill in 2016 as well as the electronic festival, Snowglobe, in Tahoe.

RL Grime has recently joined the likes of legendary artists such as Snoop Dogg, Diplo and Anderson .Paak to perform at UCSB. It is also worth mentioning that opening act Destructo was also a solid addition to the show and brought a more narrow EDM-favoring crowd in early for some pre-Grime womps.
Second-year Ryan Andrews explained, “EDM is a huge part of the culture here. We all love rap and rock as well, but it is really nice to get to come to see some legit festival quality DJs for such a cheap price.”
But even for someone outside of the electronic culture, RL Grime provided a high-energy set that was difficult to dismiss for lovers of any genre.

RL Grime, along with his elaborate assortment of heavy electronic drops, is an extremely talented mixer that wields a unique ability to incorporate other genres into his set. The skill that tends to unite communities is his constant integration of popular hip-hop into his electronic beats, which was made most prevalent with his smash hit remix of “Love Sosa” by Chief Keef. The general approach is to take the already infectious hook of a popular hip-hop song, throw it over a heavier and steady beat and use it as a segue to another electronic drop or melody. Grime has mastered this technique. The genres, which normally seem like polar opposites, were mixed seamlessly in his performance which kept the set flowing well and constantly captivating.

Among the other songs sampled were throwback “Can’t Tell Me Nothing” by Kanye West, The Weeknd’s broken love ballad of “The Hills” and the new instant classic from Future, the beautiful “Mask Off.” These tunes kept the set dancy and vibrant as well, which can help with the common complaint of an electronic set being too monotonous or artificial. Destructo used the same technique but to a less frequent degree, most memorably with the addition of XXXTentacion’s controversial “Look at Me” amidst his pounding electronic bass.

As a prominent artist in the UCSB community, RL Grime’s beats caused the audience to respond with vibes that were, for lack of a better term, electrifying, all night long. The student crowd had the same energy as any other typical RL Grime show: plenty of sweaty bodies jumping, moshing, screaming and borderline violently losing their minds to all of the gnarly beats that were dropped. Regarding the performance, Leah Bronstein responded simply yet elegantly: “It was grimey,” she stated, “grimey with a side of filth.” 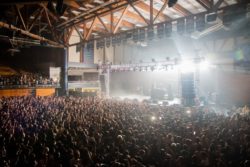 As a music enthusiast and writer, I often feel that it is my given duty to dislike everything that the Electronic Dance Music phenomenon stands for. I’m inclined to believe that it is artificial, without any real message or intelligence and painfully repetitious. The idea of a concert where jumping is the only acceptable form of dancing and drugs are encouraged for enjoyment seems ridiculous to me, and I often find it easy to slouch back into my corner of artistic snobbery with all of the other non-believers. However, there is a lot to be admired here; RL Grime is amazing. The internet EDM hero brought together a ton of different kids with merely a laptop and creativity. He truly is an extremely talented mixer.

But more importantly, I had way too much fun at this concert. The lights were dazzling, I was moving around like an idiot, I was hooked. The bass hit hard, people were going nuts and it was exactly what you would expect. Mesmerizing seems to be the only word to describe my experience as I was constantly finding myself lost in the sheer euphoria that was presented to me.