The Daily Nexus
Music
Homeshake Brings Silky Sounds to Storke
April 13, 2017 at 5:27 am by Zoe Jones

On Monday, the steps descending to the bottom of Storke Tower rapidly filled with denim-covered bottoms and sneaker-clad feet. Passersby stared into the space in front of the tower, wondering why the crowd had gathered — especially since it was prime time for lunch or afternoon classes. The eager group, some of whom had sacrificed both food and learning, was awaiting an afternoon set from Homeshake, the synth-pop project of singer and multi-instrumentalist Peter Sagar.

Homeshake, currently on tour behind Fresh Air, made a quick stop here in Santa Barbara, presented as part of the noon concert series. This show continues a tradition that is 30 years strong; Program Board’s noon Storke shows started in the early ’80s. The campus population’s music tastes have, of course, changed since then, so the ASPB team tries to account for our wide variety of tastes. Justin Taing, Program Board’s special events assistant, said that his goal is to “get a good mix of local and traveling bands, a combination of my own tastes and people I think would be a good fit.” It is also important for himself and ASPB as a whole to keep in mind the flexibility that the open space of Storke provides in terms of audience accessibility and movement. As anticipation for Homeshake grew, the crowd was visibly pleased, content with Program Board’s appeal to their indie sensibilities.

Homeshake began in 2013 with the release of The Homeshake Tape. Another cassette followed, and the project was eventually signed to indie label Sinderlyn, which released Homeshake’s debut album In The Shower. Before departing to focus on Homeshake, his misleading moniker for work that is mostly solo, Sagar was a guitarist for Mac DeMarco’s backing band. Echoes of DeMarco’s brand of slacker rock can occasionally be heard in Homeshake’s easygoing sound. In fact, Homeshake and DeMarco are part of a festival-favorite group of Canadian acts, including folk-pop singer Andy Shauf and dream rock band Alvvays.

While setting up the various pedals and effects boxes necessary for his woozy, warm sound, Sagar did not participate in much banter with the audience. He quietly worked on getting everything positioned just right, his thick yellow sweatshirt and khaki-colored pants almost inappropriate for the early April heat. Five minutes past noon, he signaled up to the makeshift soundbooth perched at the top step above Storke, and launched into the instrumental “Hello Welcome,” the opening track from Fresh Air. His bite-sized songs are a good fit for the hour-long slots for Storke shows, creating a set jam packed with tasty sounds. 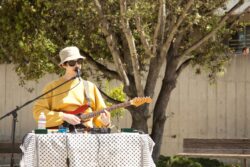 Next on Homeshake’s short setlist was “Call Me Up,” a single that has become one of their most popular tracks. This song belongs on the suggestive playlists of college kids, particularly if they want to impress a girl or guy that’s into cool music. Over catchy, staccato synth notes that replicate the melody of the song, Sagar sings, “Any time you want to just call me up, and I’ll answer you.” His falsetto, manipulated heavily by his ensemble of electronics, melted seamlessly into the day. However, a few songs into the set, he commented that it was “weird playing in the sunlight.” Homeshake does not boast a sound that is daytime-ready, but nonetheless, the soulful melodies were pleasantly warm.

At the first notes of “Khmlwugh,” a few cheers came from the front of the audience. The track is one of Homeshake’s sexiest and most instantly recognizable. Homeshake’s entire catalog flirts heavily with the sensual, but this song brings it to the forefront with a steady drum beat, unhurried keyboards and Sagar’s voice in its lower register. “Kissing, hugging, making love, waking up, getting high” is what the letters of the song’s unpronounceable title stand for. Homeshake has a charming way of marrying jazz fluidity and R&B chill with soulful grooves. The songs’ warbling instrumentals paired with Sagar’s soft vocals serve as a foil to one another, but these elements are able to create contrast without tension.

“Making a Fool of You,” from Homeshake’s debut In The Shower, was another familiar track, centered around a jam session bass line. By the middle of the set, a sizable group of people had formed in front of the speakers of the outdoor, makeshift stage, most of them having ditched their Vans to dance barefoot on the pavement.

Although Sagar and his band moved through the set with little banter, presumably due to obvious time constraints, he did take time to thank everyone who was watching. Peering through his oversized, round, black sunglasses, he commented, “Pretty nice campus, congratulations. I hope you all have an easy time getting out of debt.” His dry sense of humor seems stifled in writing, but his joke was tinged with sincerity.

Homeshake closed the show with the sunny, midtempo “Home at Last.” As I looked around at the moving bodies, tapping feet and nodding heads, I felt at home: a few weeks into a Santa Barbara spring with the sun shining like it never left in the first place.