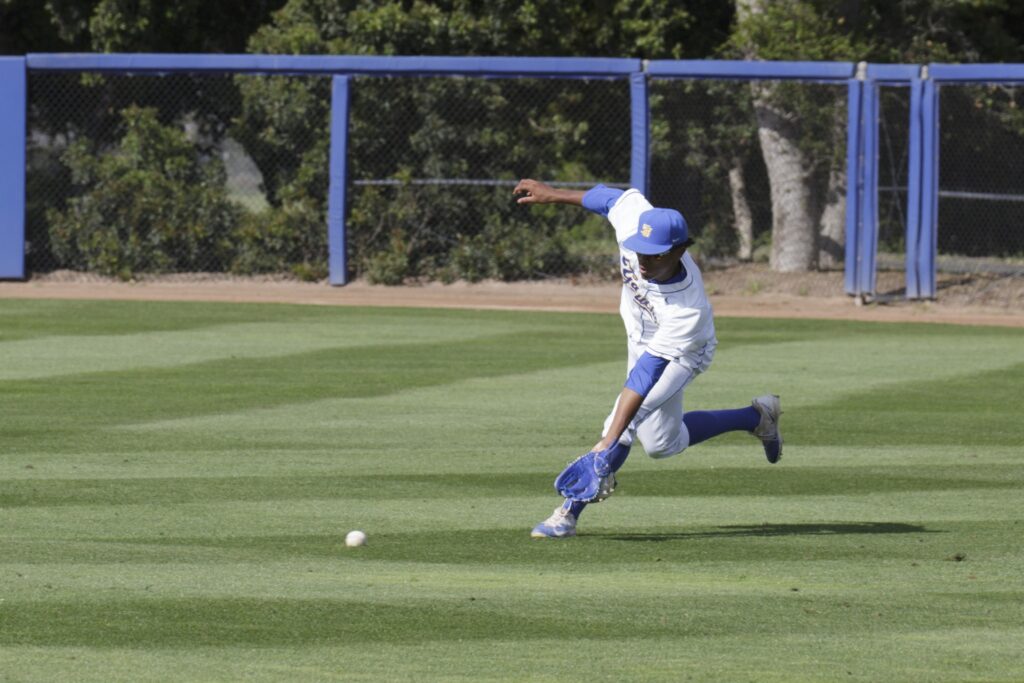 Putting forth an excellent 15-hit, 11-run soiree, the UCSB baseball team was able to easily take game one of a three-game set against conference rival UC Irvine, attaining an 11-3 win at home earlier today.

“I thought we played well today,” Head Coach Andrew Checketts said. “In the beginning, we were reaching but the guys adjusted and we got a lot better.”

Santa Barbara now improves to 14-17 overall and inches one step close to being .500 in conference play, obtaining a Big West record of 3-4. Irvine continues to struggle through this middle part of the 2017 campaign. Now losers of 13 of its last 14 games, it falls to 12-18 overall and 1-3 in conference play.

Winners of three of its last four, UCSB has scored at least eight runs in all four of those matches, and they have outscored their opponents by a combined score of 39-22.

“It was nice to have some breathing room,” Checketts said. “Three or four runs doesn’t make you feel super comfortable so it was nice to extend that in this game and it let Noah have the confidence to let it fly.”

Riding the momentum of a great hitting day on Tuesday against Nevada, the Gauchos followed that performance up with an even better command of the plate, both from the mound and from the batter’s box.

“We are thin in the bullpen,” Checketts said. “We have had some additional injuries and we need our starters to pitch deep into games to preserve some of those [bullpen] guys.”

In the bottom of the first, Burns began the game strong for the Gauchos with a leadoff double. The junior utility had a game-high four hits in five at-bats and one RBI. He would later score his first of three runs on the day after a UCI error by the third baseman on a freshman utility Armani Smith at bat giving the ’Chos a 1-0 lead after the first inning.

After two scoreless innings, UCI in the top of the fourth got a leadoff double from the Big West’s batting average leader junior utility Keston Hiura. Irvine parlayed the two-base knock into one run, trying the game.

In the bottom half of the frame, the Gauchos responded in a big way as sophomore designated hitter Sam Cohen homered to right field for a two-run shot, giving his team the 3-1 lead after four innings.

“I think it was a momentum shifter after that one run Irvine put up,” Cohen said. “Our dugout needed some energy and something to get us going and a two-run homer does that.”

After a quick inning from Davis, UCSB gave its starting pitcher a very comfortable 7-1 lead after scoring four runs in the bottom of the fifth, all coming from RBI singles by junior infielder Austin Bush, Corey, redshirt junior shortstop JJ Muno and Cohen.

Irvine would cause trouble at the top of the next inning, scoring two runs, but the game never got any closer than that as the Gauchos kept swinging the bat well and scored one run in the bottom of the sixth and three in the seventh to make the game 11-3 after seven full.

In the final frame, Davis looked as though he would go the full nine, but he fell just a bit short, pitching 8.1 innings and earning himself the win along with five strikeouts.

“We’ve seen Noah pitch like that, that’s kind of our expectation for him,” Checketts said. “Frankly we are a bit more shocked when it’s not like that.”

His performance could go a long way in this series as the Gauchos were able to preserve a short-staffed bullpen. Freshman pitcher Conner Roberts stepped in and got the final two outs of the game to secure UCSB’s 11-3 series-opening victory.

Overall, Santa Barbara looks like a team that might be on the verge of really turning that corner if it hasn’t done so already. The hitting seems to be there, and as long as the starting pitchers can put together a lengthy, solid start, the Gauchos might be in store for another postseason run.

That being said, tomorrow is just another game for a team that is under .500, and before UCSB starts thinking about any postseason fantasies, it has to continue its high level of play.

The Gauchos face the Anteaters for game two at 3 p.m. on Friday, April 14, at Caesar Uyesaka Stadium.