In order to increase efficiency in some of the major bus lines, the MTD will be adding new technology and supplemental shuttles to existing routes 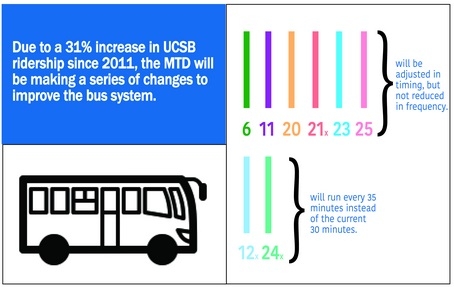 The Santa Barbara bus system is adding 14 new electric shuttles and introducing new farebox and smartphone technology to modernize its system as well as rebranding its 30-year-old logo.

The Metropolitan Transit District (MTD) will accompany the technology with a new student access system in the next year, along with making changes to bus schedules beginning Aug. 21.

According to reports by the American Public Transportation Association, UC Santa Barbara student ridership has increased by 31 percent from 2011 to 2016 — a contrast to the dropping rates both nationwide and in California.

Nationwide ridership is decreasing, said Hillary Blackerby, MTD marketing and community relations manager, due in part to a sustained period of low gas prices and the change in landscape for transportation.

Blackerby said they cannot point out a specific reason for declining ridership, but they are “definitely interested in competing for people’s ridership.”

According to the MTD 2016-2021 Strategic Plan, “The vision of MTD is that public transit within the District should be so available and attractive that use of an automobile is a choice, not a necessity.”

Despite national and statewide ridership trends, 14 new electric shuttles are being custom-made in Lancaster, CA, and after thorough training and testing, they will slowly be introduced to the district this summer.

The new shuttles “show [their] commitment to the environment,” Blackerby said, and she hopes their schedule adjustments will improve bus arrival timing.

Blackerby said the proposed schedule adjustments hope to combat traffic congestion, primarily near the Storke and Hollister intersection, which is caused by the new housing developments that have changed the traffic flow.

MTD is also testing student ACCESS cards to see if they will be compatible with new fareboxes that will be installed later this year.

Blackerby said the new boxes will work based off of a list of active student ID numbers that determine rider eligibility when a card is swiped. The boxes will replace the bus sticker system for UC Santa Barbara and Santa Barbara City College students. MTD officials are still negotiating the details with the university, she said.

A new smartphone app will also launch later this year to give real-time GPS tracking of buses en route, Blackerby said. The service will also be available via text for non-smartphone users.

“As someone who has waited hours in line” at the A.S. Ticket Office to get a bus sticker, third-year history of public policy major and Off-Campus Senator Batsheva Stoll said she is looking forward to the new farebox system.

Stoll said she believes this change will best serve students that live in the Santa Catalina dormitories because “They are the ones that use the bus the most to get to school.”

Lines 12x and 24x, which run from UCSB to downtown Santa Barbara, will decrease in frequency, running every 35 minutes instead of the current 30 minutes. A few isolated trips will be removed throughout the day so the buses’ arrival times are more consistent.

Lines 6, 11, 20, 21x, 23 and 25 will be slightly adjusted in timing but not reduced in frequency. A minor reroute will be made for Line 23 after 7 p.m. to accommodate the El Encanto Heights neighborhood.

The UCSB and SBCC student line, 15x, will see a frequency increase of up to six minutes. An additional six trips in both directions will be added during “key parts of the day,” said Transit Planner Mark Clyde.

Lines 1 and 2 will revert morning weekday commute hour services from 10-minute to 15-minute frequencies due to the loss of a grant source.

The Nexus previously reported that a potential route from Goleta to Carpinteria during the morning and evening commute hours would become available through Caltrans funding. Blackerby told the Nexus, however, that Caltrans decided to not fund the project.

“Their schedule is not tracking correctly with what is happening in reality, and to a lot of people [the changes] look like a cut at first, but I think they did a good job at clarifying,” said Director of the Isla Vista Community Services District Spencer Brandt.

“It’s always better to have a schedule that is in line with reality so that folks don’t end up waiting at a bus stop,” said Brandt.

A version of this story appeared on p. 3 of the Thursday, April 13, 2017 print issue of the Daily Nexus.