The Daily Nexus
News
Campus Feels Strain of Increasing Enrollment
April 13, 2017 at 2:04 am by Tamari Dzotsenidze

As the number of students at UC Santa Barbara increases, the campus is feeling the crunch.

The Board of Regents approved UC President Janet Napolitano’s plan in November 2015 to enroll 10,000 more undergraduates across the UC system by the 2018-2019 school year. 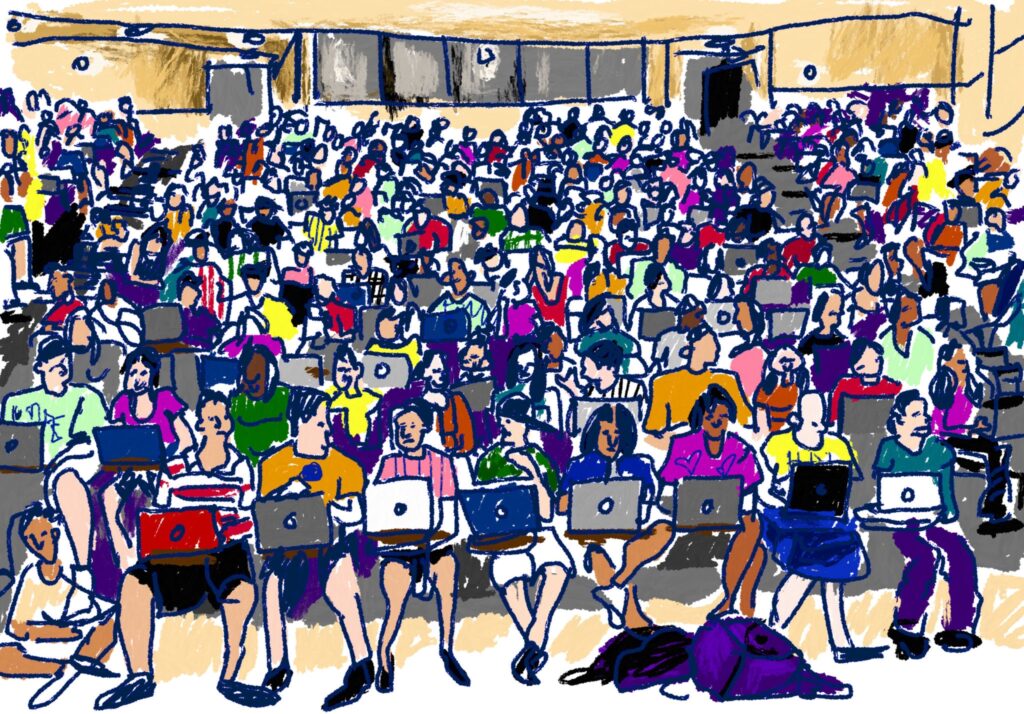 In March, the Chemistry Department faced challenges trying to accommodate upper division students in the 116BL course, a prerequisite needed to complete the major. Over 20 students were waitlisted, with no facility space to add another lab.

Rachel Alvelais, a third-year chemistry major, had extensive concerns regarding whether she would be able to graduate on time.

Taking a summer class, an option that has been offered by several departments, is a choice that does not appeal to students like Alvelais, who did not initially plan to take summer courses and have other internship or research obligations.

Alvelais, however, said she feels that if she was not able to get into the lab course needed to graduate, she would have no choice but to take summer classes, despite the financial burden.

The department added more students to each existing lab class, and Alvelais was able to take the class she needed to graduate and do research over the summer; however, her experience is indicative of a more widespread problem.

Steven Buratto, chair of the Chemistry Department, said he is concerned about a lack of resources for the increasing number of enrolled students.

“The University of California is great. You get a great education for a reasonable price, comparatively speaking,” Buratto said. “But we don‘t want to get so overcrowded that we can’t accommodate the students that we have.”

The Chemistry and Biology Departments face issues with physical lab space, a lack of graduate students to work as teaching assistants and a lack of faculty.

“We’ve reached our capacity, and so at some point throwing money at it doesn’t work,” said Stephen Poole, chair of the Molecular, Cellular and Developmental Biology (MCDB) Department. “You need faculty to teach these students, you need graduate students to work as TAs, so money could help there; we could expand our graduate program.”

These restrictions are not felt only within S.T.E.M. fields.

Such restrictions make certain classes more competitive in terms of enrollment, which limits the ability of non-global studies majors to enroll in popular global studies courses.

Though other UCs have begun offering classes during the evening, there are several challenges to doing this at UCSB. Poole said this is not a viable solution due to the staff needed to prepare labs and the fact that certain lecture halls, like Campbell Hall, are used for other purposes at night.

“Graduate students are critical to both the teaching and research missions of our university,” Napolitano said in a statement. “They serve key roles in supporting the academic inquiry and discovery of our faculty, as well as the teaching load for our undergraduates.”

Larger class sizes are difficult for students to get into and in many cases can negatively affect students’ learning experiences.

Jerry Chung, the education coordinator for the actuarial science department, said large class sizes hinder students’ ability to interact with each other and increase their own knowledge.

“An unintended consequence of huge classes is that students in the actuarial science major find it increasingly difficult to network and learn from one another,” Chung said.

To combat this issue, students in the department have created UCSB’s Actuarial Association, which hosts educational and social events to network with each other.

Additionally, the effects of increased enrollment extend past the classroom.

This March, Wyatt Licht, a fourth-year communication major, started a petition to stop bike impounding across campus. The petition alleged that there were not enough bike racks on campus for all students, a sentiment that 481 petition-signers agreed with.

Student services such as Counseling and Psychological Services (C.A.P.S.) have also been affected.

Between 10 to 15 percent of students use C.A.P.S., and with outreach programs, Stanford estimates that they are able to reach around 25 percent of the student population.

She said that an increase in population density in a small space increases “irritability, frustration [and] anxiety.”

Stanford also said increased enrollment extends past C.A.P.S. and “affects everything,” including longer wait times at the Office of Financial Aid and the Registrar.

The increasing numbers also concern undergraduate housing. While the San Joaquin Residence Hall currently under construction will help mitigate the housing strain, a significant increase in freshmen could pose problems.

“If there was a dramatic increase, then we would have to strategize about how to accommodate them,” said Mario Muñoz, associate director of Resident Placement & Assignment Services. “We would probably have to look at how we distribute the spaces that we have.”

Chuck Haines, acting assistant chancellor of the Office of Budget and Planning, said that while we currently have enough space for students, more housing will have to be built in the future.

Chancellor Henry T. Yang told the Nexus in an interview Tuesday that the university wants to ensure that dorm rooms are no more than triples, and he said philanthropic support of campus housing is an option for the future.

“Any philanthropic support of housing would lower the cost to students,” Haines said.

Next year, there will be a small decrease in the number of freshmen admitted, but total undergraduate enrollment will still increase slightly due to an increased emphasis on admitting transfer students.

According to Executive Vice Chancellor David Marshall, UCSB has been steadily increasing enrollment according to the Long Range Development Plan (LRDP), which has a cap on enrollment at 25,000 students.

State pressures to increase student enrollment, however, have forced UCSB to grow at a rate much higher than the LRDP suggests.

As enrollment increases, so do the costs, including C.A.P.S., faculty and other services.

“We need a long-term plan,” said Yang. “I and the deans and the budget planning team are addressing this problem.”

A version of this story appeared on p. 1 of the Thursday, April 13, 2017 print issue of the Daily Nexus.