The Daily Nexus
Volleyball
Boehle to the Third Power: UCSB’s Brotherly Trilogy
April 13, 2017 at 5:10 am by Spencer Ault

When Parker Boehle learned that he’d be redshirting his freshman year as a member of the UCSB men’s volleyball team, he immediately started doing the math.

There was a chance that, given the extra year created by his redshirt, Parker’s two younger brothers, Hayden and Davis, could join their older sibling on the UCSB team. As it turned out, the math worked out perfectly.

Of course, just because the timing worked out didn’t mean that reality was guaranteed, too. The odds of just one brother making it to the NCAA level and getting a spot on the Gaucho team was small enough. Three brothers would be almost impossible. 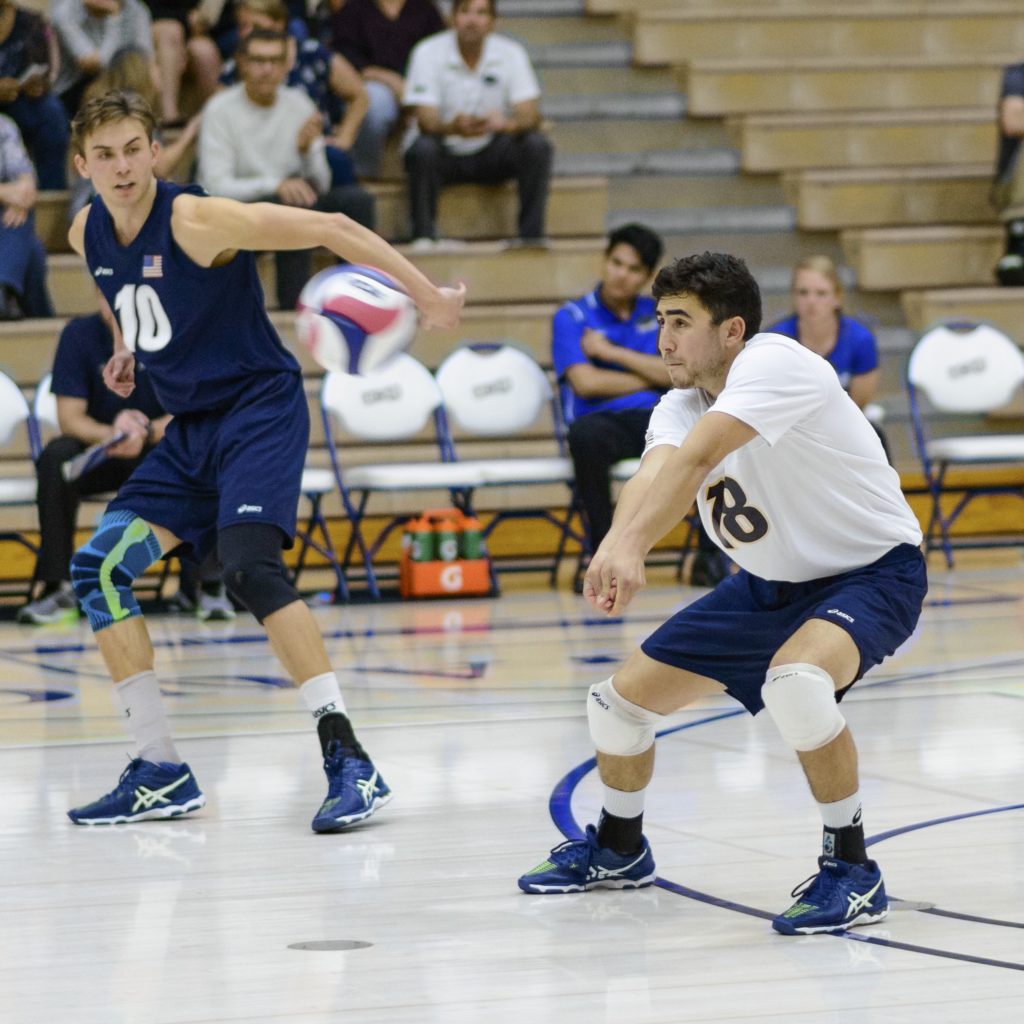 But that’s exactly what ended up happening. The last name Boehle appeared three times on the 2017 UCSB men’s volleyball roster, as Hayden, now a junior, and Davis, a freshman redshirt, defied the odds and embraced the timing to join their older brother.

“It started getting a little better when [Hayden and Davis] started getting recruited,” Parker said. “I was like, ‘Wow, this might actually happen’… And now here we all are. It’s pretty crazy.”

The 2017 season, which recently ended with the Gauchos going 10-16 overall and missing out on the MPSF postseason tournament, didn’t go exactly as the Boehles might have hoped. Davis never actually got to see the court at the same time as his brothers, as he followed in Parker’s footsteps by redshirting his freshman season.

That said, being on the same team and on the same campus washed away some of the stings for the Boehle trio. Years of playing and living together created a bond that goes beyond that of normal teammates, something that shows on the court.

“We know we have our backs,” Davis said. “We know we’re there for each other. When we’re down, we pick each other up. You just know that you have your best friend on the court with you.”

Parker, Hayden, and Davis didn’t just stumble upon volleyball by accident. Michael Boehle, their father, is in his 19th year as head coach of the boy’s volleyball team at Loyola High School, currently the top team in the nation. All three Boehle boys played for their father there, but their volleyball roots go even deeper than just high school.

“We all started playing when we were super young,” Hayden said. “We have a little grass court in our backyard, so we started probably when we were around eight to 10.”

Michael Boehle, naturally, played a pivotal role in cultivating his three sons’ love for the game. The elder Boehle played beach volleyball professionally back in the day and has won six CIF Southern Section titles at the helm of the Loyola squad. A resume like that gives a dad a lot to teach his kids about the sport.

“He’s probably the most important person in my career in terms of volleyball,” Parker said. “He taught me the game. He showed me how to compete and how to lead.”

Volleyball isn’t just a boy’s thing in the Boehle family, however. Parker, Hayden, and Davis have a younger sister named Ella, who is currently a junior on the volleyball team at Notre Dame Academy in Los Angeles.

“It’s been pretty funny watching her grow up and be able to compete with us in the backyard,” Davis said. “She used to have to watch from the sidelines, but now she can hold her own with us.”

There’s only one non-volleyballer in the Boehle clan: Lisa Boehle, mother of UCSB’s sibling triangle. That doesn’t stop her from joining in on backyard matches, though.

“She’s probably the only one in our entire family who can’t play volleyball,” Parker said. “We give her a hard time, but she’ll go out there and she has fun with it. She’s a great sport.”

As might be expected, the shared volleyball upbringing has left the Boehle brothers with some similarities as players. All three consider ball control one of their greatest strengths as well as volleyball IQ. 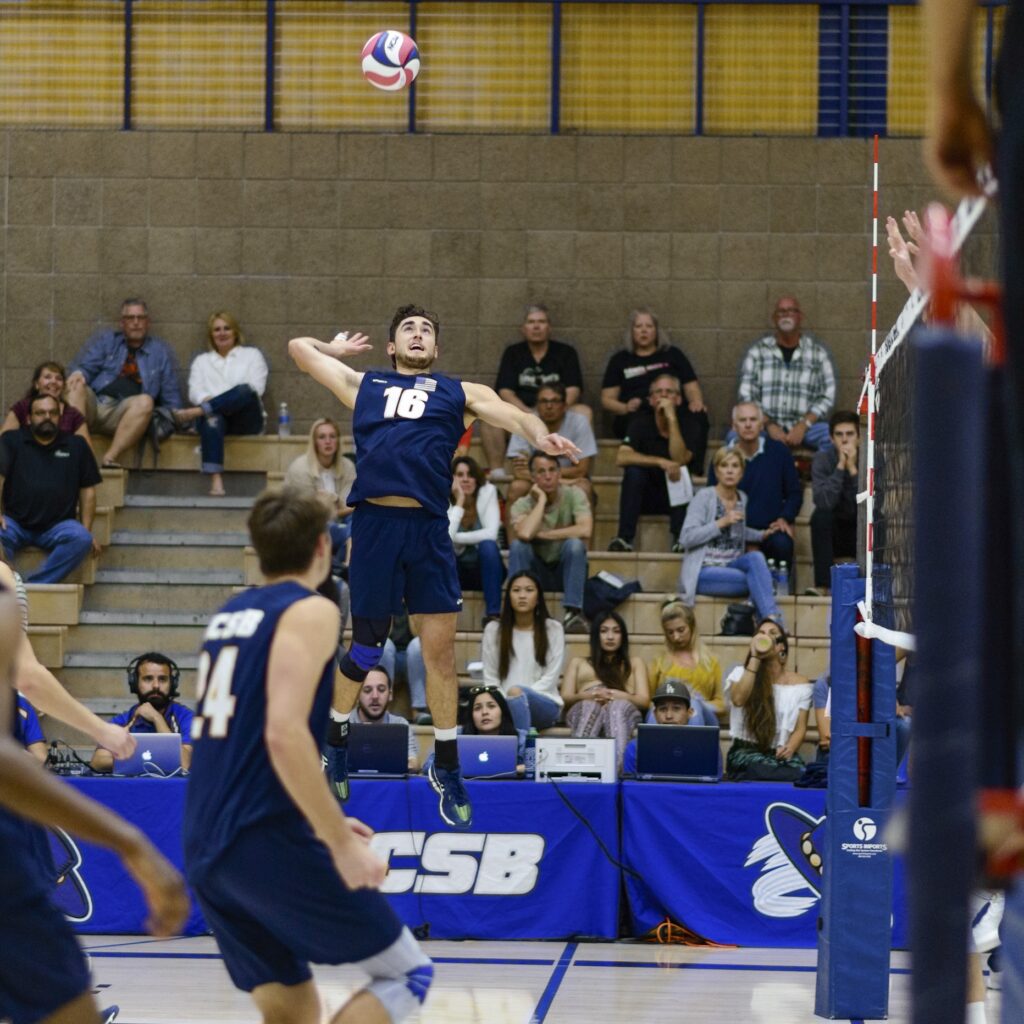 Hayden Boehle swings over the top of the block. Eric Swenson / Daily Nexus

That doesn’t mean that they’re all carbon copies, however. Hayden plays outside hitter for the most part, while Parker and Davis both play at the libero position. That pattern carries over to communication, as Parker and Davis both outtalk the middle sibling on the court by a significant amount.

Indeed, all three brothers noted an every-other pattern in their family. Parker and Davis look and act alike, while Hayden and Ella share some major characteristics between each other.

“Hayden’s a lot like my sister,” Parker said. “It’s kind of like me and Davis and then Hayden and my sister; the two pairs have a lot of similar traits. My sister kind of acts like Hayden did when he was in high school, and then I see a lot of things that Davis does that I used to do back then.”

“We look alike,” Davis said of his similarities to Parker. “Literally, there will be times where we think the same thing without knowing it and be like, ‘Wow, that’s kind of crazy.’”

Parker and Davis do bear a major resemblance to one another, with one small difference: Davis’ broken nose. That’s thanks to none other than Hayden, who smashed a ball right through Davis’ hands in a backyard volleyball match.

Anyone with siblings can tell you that such injuries are just a part of life growing up, and Davis certainly doesn’t seem to hold a grudge against his brother for the incident. At least Gaucho volleyball fans had better hope he doesn’t since they’ll be sharing a court come next season.

Hayden and Davis will carry on without Parker, who played out his last year of eligibility this past season. Luckily for the three siblings, they all got to share that year on the same campus, thanks to that freshman redshirt that made the math all possible.