The Daily Nexus
Science & Tech
A Better Diet May Save Money and the Environment
April 13, 2017 at 11:14 am by Stephanie Pernett

As concern regarding climate change continues to rise, expensive, resource intensive strategies like decarbonizing the energy grid, and even drastic measures like geo engineering, are becoming more seriously considered.

However, a new study led by UC Santa Barbara analyzed the potential effects of an inexpensive alternative — healthier diets. They found that their healthier model diets could reduce greenhouse gas emissions from both the food and healthcare systems in the United States.

The researchers found that the adoption of one of three healthier diets reduced the relative risk of coronary heart disease, colorectal cancer and type 2 diabetes by 20 to 45 percent, U.S. healthcare costs by $77 to 93 billion per year and direct greenhouse gas emissions by 222 to 826 kilograms of carbon dioxide equivalents per capita per year.

“There’s been a lot of research on the relationship of our diet to health and to the climate. We have a pandemic of noncommunicable diseases due to our crappy food system, and our food system emits at least 25 to 30 percent of human caused greenhouse gas emissions—so those two have been done,” Cleveland said. “People have even looked at the effect of diet, climate and health at the same time, but what people haven’t looked at is what’s the effect of diet on climate via the healthcare system, so that’s the main component that was unique to our study.” 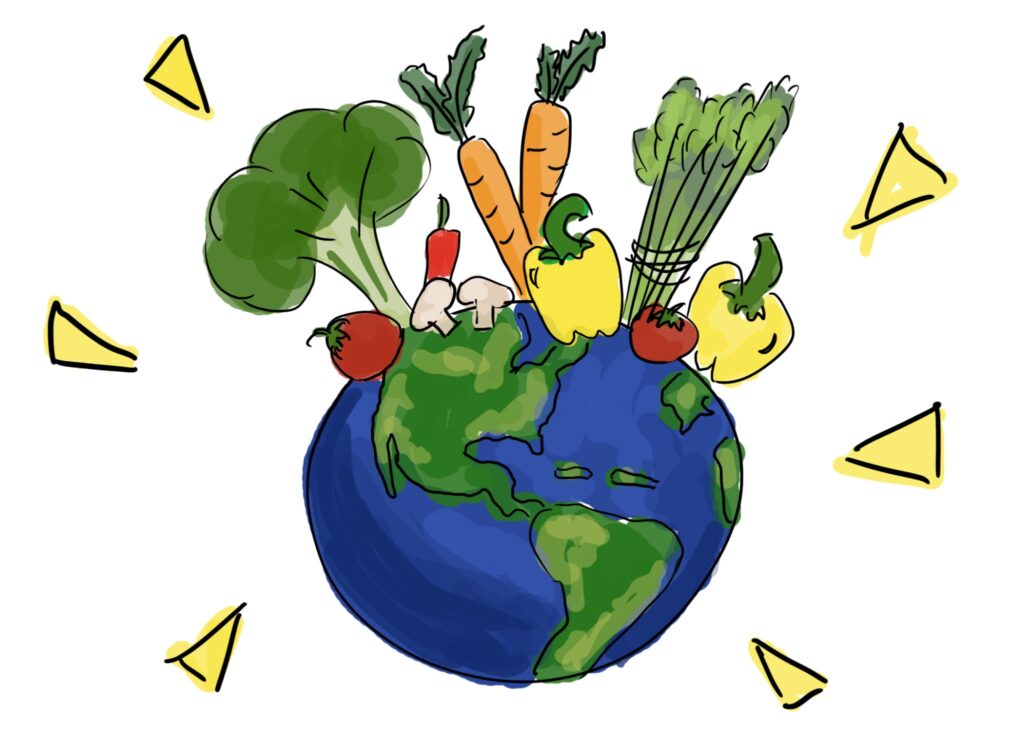 The average food intake by America’s population has become less healthy in recent decades and, in combination with an increasingly sedentary lifestyle, has resulted in an epidemic of chronic, noncommunicable diseases.

About half of all U.S. adults have one or more chronic diseases, and about two-thirds are overweight or obese. Noncommunicable diseases are important contributors to increasing U.S. healthcare costs, which were almost $3 trillion per year in 2014, 18 percent of the total U.S. gross domestic product.

“It’s pretty much widely agreed that most of our food system’s greenhouse gas emissions are due to the ruminant animal foods,” Cleveland said.

“We created these healthier diets based on dietary recommendations and the foods for which there is very strong evidence for their effect on health, and so if we change these foods to create the three diets, how much will this actually affect health? What will happen to the relative risk of the three diseases we identified, colorectal cancer, type 2 diabetes and coronary heart disease?” Cleveland said. “We were able to look at the relative reduction of relative risk, and we assumed that there’s a proportional decrease in the healthcare expenses of those diseases.”

They then used a database at Carnegie Mellon University that has the greenhouse gas emissions associated with dollars spent on different parts of the economy.

“We can look at, for example, diabetes, which has so much money spent on it every year on pharmaceuticals, so much hospital care and so on, and you can look at the database. For every dollar there’s so much greenhouse gas emissions,” Cleveland said.

Using that database, they were able to quantify the effect of a healthier diet on climate change not only through the food system, but also through the health care system.

“We’re fortunate because it’s easy to create diets composed of foods that are both good for the climate and good for health. Wouldn’t it be terrible if the foods that were really good for our health were also terrible for the environment and visa versa? But fortunately, that’s not the case,” Cleveland said.

Cleveland believes of the results of their research could help motivate change at both a personal level and a social level.

“I think the nice thing about this is the link it creates, in terms of people’s change in diets and in terms of policy; it unites the personal, immediate desire to be healthy with the growing desire of people to contribute to solving the big social and environmental problems we have,” Cleveland said. “And we can advocate for these changes in our own lives, here at UCSB, and in the world.”