After three straight losses and a current 11-15 overall record, the UCSB baseball team approaches its first Big West road series of the season as it takes on conference opponent Cal State Northridge starting this Friday.

Like the Gauchos, the Matadors host their opponents having lost their conference opener giving them a 1-2 record to begin Big West play.

Despite having accumulated only two wins in their last 10 games, CSUN is two games below .500 so if the men from Northridge can execute two wins this weekend, not only will they take the series from a conference rival, but they will also be back to an even record.

UCSB, on the other hand, will need to sweep CSUN as well as grab the victory over Nevada next Tuesday to reach the .500 mark. 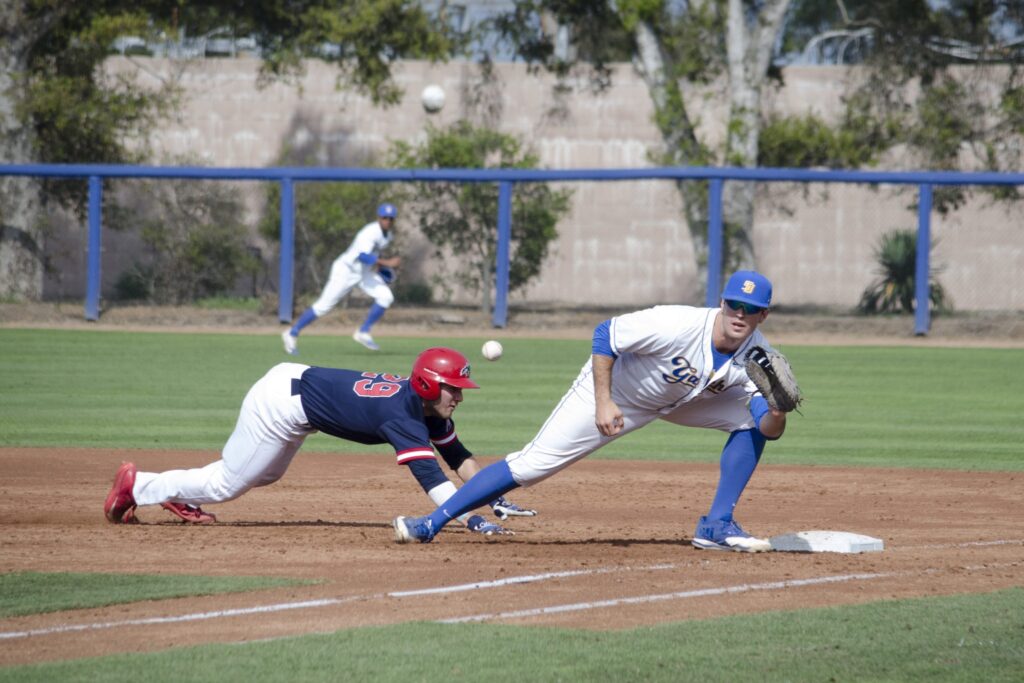 Austin Bush reaches for the ball as a runner dives back to the base. Christina DeMarzo / Daily Nexus

Sophomore RHP Noah Davis (4.76 ERA, 5-2) will be starting on the hill for the Gauchos in the Friday match.

Davis is tied for first in the Big West in wins and is looking to further execute his dominance in the series opener, followed by junior southpaw Kyle Nelson (3.49 ERA, 3-3) on Saturday and junior RHP Chris Clements (5.46 ERA, 1-4) rounding out the series on the mound Sunday.

UCSB has been subpar over their last ten games posting a record of 5-5 despite being at home and are batting with a collective average of .264 compared to CSUN’s .242 average.

Additionally, regarding defense on the diamond, Northridge has a somewhat higher fielding percentage on the season of .966 over UCSB’s .962, but the Gauchos have 37 total errors to the Matadors’ 39. As for pitching, the UCSB pitching staff has a total 4.76 ERA compared to a 4.89 ERA for that of CSUN.

These team statistics are of little dominance in the Big West Conference overall, and they are not of great contrast in comparison to one another. However, they highlight that the Gauchos have marginally been pitching, producing fewer errors and creating hits a bit more successfully as a team than the Matadors have and that they generally have not been struggling as much as Northridge has.

Despite the teams’ struggles, CSUN junior catcher and designated hitter Albee Weiss is leading the Big West in RBIs this season with 25 and teammate Kevin Riley is right behind him with 24.

Riley, a redshirt junior first-baseman, is also tied for first in Big West in HRs with six total, just above Weiss, who is sitting at a tied second place with five HRs on the year so far. The two sluggers are placed at spots three and four, respectively, on the Matadors’ starting lineup and present a clear threat to the UCSB pitching staff and defense.

For the Gauchos, junior outfielder Colton Burns is on the season leaderboard of hitting statistics, with a batting average of .362 to earn him the third spot in the Big West. But other than Burns, no other Gauchos are individually leading the conference at the plate. In fact, no other Gaucho hitter that has started every game is currently hitting above the .300 mark.

As teams, neither UCSB nor CSUN evidently has a command over the other, making this series a fairly even matchup. However, they each have strong and talented individuals who assuredly have the potential to execute on any opportunities that come their way to produce a spark for success. Moreover, baseball is a game that has the tendency to defy any sort of expected outcomes one might provide, as most fans know.

For Santa Barbara, in particular, it definitely needs a change of pace if it wants to salvage what has been a rough start to the season. Advantageous to the Matadors, the Gauchos have a shaky 2-9 record when away from home, so they will certainly need to determine a way to gain more of an edge without their optimal home-field support.

UCSB takes on CSUN in a three-game series beginning at 3 p.m. on Friday, April 7th at Matador field with Saturday and Sunday’s games kicking off at 1 p.m. at the same location.