The Daily Nexus
Sports
For the Love of the Game: UCSB Club Baseball
April 6, 2017 at 5:10 am by Max Fernbacher

Five foot seven and a buck seventy, senior Joseph Rosenblum doesn’t pass the eye test for most opposing pitchers. What the fourth-year UC Santa Barbara club baseball team captain lacks in terms of size and stature, he makes up with tremendous speed on the basepaths and lightning-quick bat speed. Think of a Dustin Pedroia or a Jose Altuve type. Rosenblum loves the game of baseball and plays with an immeasurable amount of hustle and heart. Not only does he play the game each time as if it is his last, Rosenblum is a true student of the game. After playing second base his first three years at UCSB, this offseason Rosenblum elected to make the transition to third base to open up a spot at second. To learn the nuances of playing third base he sought advice from UCSB division one infielder Jeremiah Muno. 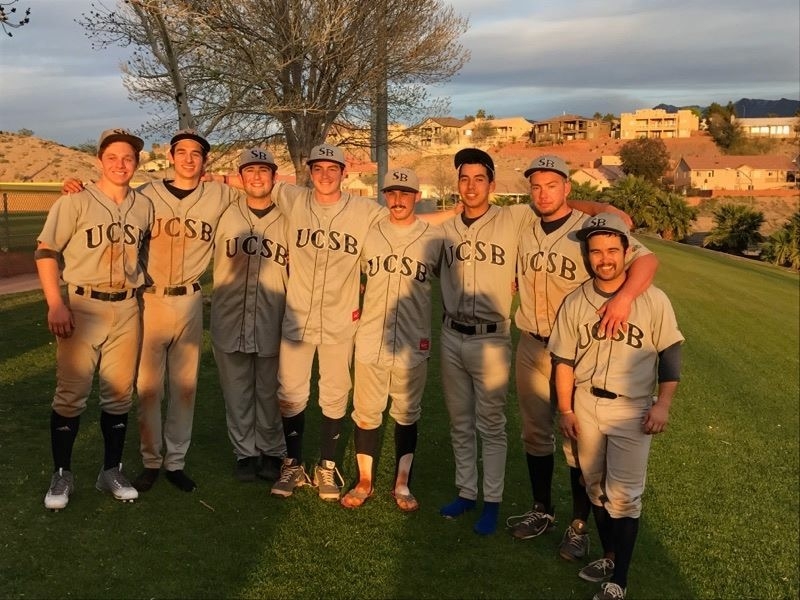 Rosenblum is just one of the reasons UCSB club baseball is off to a hot 7-1 start this season. The other contributions have come from the twenty-nine other players on the roster, all of whom are UCSB students. Four junior college transfers bolster the pitching staff and eight seniors provide leadership on the team. According to Rosenblum the team is composed of former high school and junior college baseball players that simply want to continue playing the sport they love.

“Our team is made up of guys who want to continue their playing careers after high school or junior college. Many of us have tried to make the division one team here at UCSB but we were unable to secure a roster spot. That includes myself, as I was told I was too small. So we play club baseball because it allows us to play baseball at a high level while we are focused on getting a great education here at UCSB,” Rosenblum said.

The club team at UCSB is part of the National Club Baseball Association (NCBA), a national body that governs club baseball at the collegiate level. College club teams in the NCBA either do not have NCAA baseball teams at their schools or like in the case of UCSB have generated enough interest to form a club team. The UCSB club team is in the Southern Pacific West Conference, a NCBA conference that includes Cal Poly San Luis Obispo, UCLA, the University of Southern California, Long Beach State and Cal State Fullerton. With a 4-1 conference record and 7-1 record overall, the Gauchos trail only Cal Poly SLO in the conference standings.

In early March the team traveled to play in a wood bat tournament in Mesquite, Nevada and went undefeated in four games. Despite packing four or five ballplayers to a room and living off the $8 Chinese buffet down the street from the hotel, the Gauchos thrived on the field in Mesquite. There they defeated twentieth ranked Utah State to earn a national ranking of their own. Rosenblum could not remember a time in his four years when the UCSB club team had been ranked.

The team’s early season success can be attributed to each player’s dedication to improvement. Unlike the division one team at UCSB, the club team does not have access to a state of the art weight room or a hitting facility with lights. They lift in the Robertson Gym weight room or UCSB Recreation Center and make the trip over to Girsh Park near Costco to get their hacks in. Last quarter, unable to reserve a diamond at Girsh Park, they practiced twice a week at night on the Recreation Center fields. In essence, the team has embraced the old adage “where there’s a will there’s a way” when it comes to honing their craft.

Off the field, Rosenblum acts as club president and is thus responsible for all the team logistics. This includes dealing with jerseys, gear, finances and arranging field time for the team.

“Dealing with team dues, uniforms, gear and umpires can be time consuming but it is just part of my role as president. But really nothing has been tougher than our inability to find a field for practices and games. We are at the bottom of the totem pole when it comes to getting field reservations, below high school and even little league teams in the area,” Rosenblum said.

However, things are looking up for the team as spring quarter approaches. According to Rosenblum, the team has made arrangements to practice and play at Girsh Park for spring quarter. Thus, they will no longer have to practice at the Recreation Center fields nor have to travel 55 miles south to play their home games in Santa Paula.

Michael Gilbert a fourth-year math major and first generation college student, credits the club baseball team as the most important extracurricular outlet for him in college. The self-described “pride of Moreno Valley”, Gilbert has a love for the game that compares to Rosenblum’s. Quiet and humble, similar to fellow Moreno Valley native Kawhi Leonard, Gilbert has been a valuable utility player for the team the past four years. Gilbert says playing on the club team all four years of college has been his defining experience at UCSB.

“To be honest, I do not think I would have been able to get this far in school if I was not playing club baseball. I did not know what I was getting myself into coming to UCSB and we all know college can be very taxing on your mind. I feel lucky to have been able to play baseball for the past four years with a group of guys that became my best friends. Joining club baseball was the best decision I made in my four years at UCSB”, Gilbert said.

Communications major Erik VanWinkle, another fourth year student on the club team, has enjoyed his time playing on the club team and hopes the team can make the NCBA World Series this year.

“All the games coming up in April will be huge for us. We hit the ball really well in Mesquite so hopefully we can continue doing that, play some good defense and win ballgames. The team, especially our seniors, want to make it to the club nationals in North Carolina this year,” VanWinkle said.

The UCSB club baseball team (7-1) looks to continue its winning ways on April 8th and 9th, when they host a three game home series against the University of Southern California (1-8).