Since the beginning of Winter Quarter, a small group of six film and media studies students have been working to create a love letter to I.V.:  a music-inspired visual album about love in our beautiful town of Isla Vista, California.

Set to a soundtrack by alumnus Jack Johnson, the film will cover four unique students and have their interconnected stories unfold in Isla Vista over the course of their last day of Spring Quarter. The website promoting the project states, “For some of these students, it is the beginning of an epic four-year journey, while for the others it is the end and the ultimate culmination of their college experiences. For all, however, it is a time of celebration and reflection.”

For those of you who are unsure what a “visual album” consists of, it is essentially a series of music videos that come together to create a single story. The characters don’t have any dialogue; the story is told entirely through the songs used. And the music used for this short film is by a famous UCSB graduate whom we all know and love.

Danielle Erwin, a fourth-year film and media studies major and the producer of the project, said, “The music really drives the plot of the story with the lyrics and vibe of the song. Jack Johnson met his wife at UCSB, and we are doing this as a romantic story, so we were inspired by their love story.”
Aside from Johnson being an extremely successful musician, the team of film students was excited to use his music because he was also a film and media studies major here at UCSB. 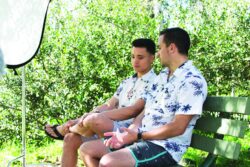 “Everyone on our crew is a huge Jack Johnson fan, so we’re just excited to use him in our work. He’s kind of a legend in the community,” said Erwin. “We all just kind of fell in love with the project.”
About 15 minutes in length and told through five of Johnson’s songs, the project was initially created due to the negative media attention I.V. has received over the past several years. Co-director and writer of the visual album Connor Haines, a fifth-year in the film and media studies department, came up with the idea while Googling Isla Vista.

“If you ever Google-search Isla Vista, it’s not the greatest thing in the world,” Haines stated. “I was sitting in class one day, and that’s what I was doing. I felt like there needed to be more positive ideas of I.V. and UCSB. I was trying to think of ways to do that, and the idea of a visual album came to my head.”

Explaining the album and comparing it to Beyoncé’s Lemonade or Frank Ocean’s Endless, Haines elaborated that he came up with a pitch for Jack Johnson to be able to use his music in a soundtrack about students’ lives on the last day of Spring Quarter. Erwin stated, “As seniors creating a love letter to UCSB and I.V., it was perfect to use Jack Johnson.”

Fortunately for the team, Joe Palladino, the film and media studies advisor, was able to get in contact with Johnson’s wife, Kim, who then passed the message along to her husband.

“[Palladino] sent the pitch I designed to Kim, and she emailed back and said that Jack and her were both on board for the project, and it was as simple as that. They got back to us the same day; it was amazing,” said Haines.

Now that the group has the rights to Johnson’s music (using “Better Together,” “Rodeo Clowns,” “Staple It Together,” “Talk of the Town” and “Symbol in my Driveway”), they are starting the filming process.
Haines enthused, “For prospective students and parents, they don’t really get to see the experiences all the students have. The goal is to show what it really means to be a Gaucho.” 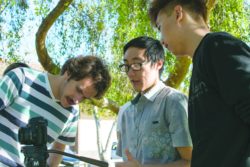 The visual album has already raised $1,875, and the group is continuing to fundraise for the project.
The students working on the short film want it to carry the warmth and joy that makes Jack Johnson’s songs so special. Their love for I.V. is truly the driving force behind the project. If they do not reach their fundraising goal, they intend to continue making the film in any way possible. Their fundraising website expresses, “For us, this is a labor of love, and we will finish it no matter what.”

Haines passionately concluded, “I.V. has gone through a lot in the last couple years. Right, wrong or indifferent, a lot of the attention directed toward our community and this school is negative. Our biggest thing is that we really, really want to get the entire community involved, whether it’s students, alumni or faculty. We want this to be a project by the community and for the community.”

What is the address of the project’s webpage?

You should link to the fundraising page, or at least provide the name of the project