Since Title IX passed into law in 1972, the University of California has made critical changes to the policy that have affected the way its campuses respond to sexual misconduct and handle such investigations. 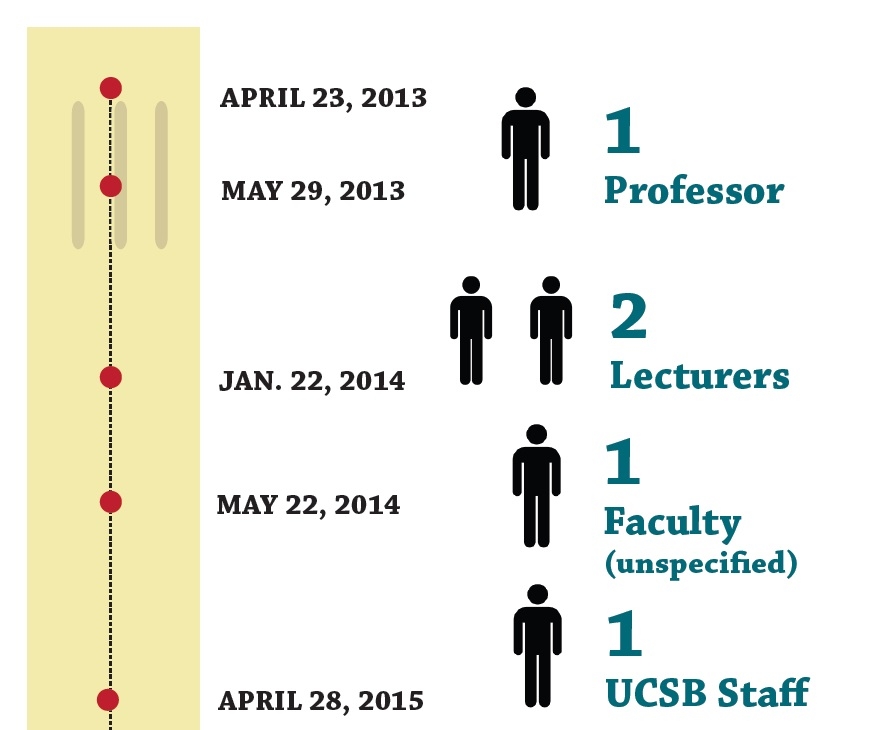 The Nexus reported in March that 124 UC staff and faculty members were accused of violating Title IX between January 2013 and April 2016. Of the six UCSB staff and faculty accused, all investigations were conducted under old Title IX policy from 2013, according to UCSB spokesperson Andrea Estrada.

UC sexual harassment policy underwent its latest change in January 2016, after UC President Janet Napolitano organized the Task Force in 2014 on Preventing and Responding to Sexual Assault. The Task Force was comprised of committees dedicated to revising multiple aspects of the policy.

Title IX is a federal state law ensuring that all students have the opportunity to participate in federally funded educational programs without discrimination based on sex. The law can apply to cases of sexual misconduct and assault and any university-affiliated organization, including sports groups and admissions.

Of the six UCSB investigations, one faculty member received a salary reduction, and the university required another to attend sexual harassment training and personal counseling. Two cases ended with the termination of an employee.

In other cases, the Title IX office substantiated the claims, but the university took no further disciplinary action as far as documents show.

Estrada said in an email that it is “too speculative” to conclude if these case investigations would have resulted differently under the 2016 policy revisions.

Kathleen Salvaty, the UC Title IX coordinator, also said she could not know if an outcome of a case would have been different under the revised policy, but she said the new policy changes would improve Title IX for future cases.

“I can say that the current policy, and the recommended changes the campuses are implementing, have strengthened the University’s processes and procedures,” Salvaty said in an email.

Adjustments made to the policy did, however, alter the way the UC investigates student and employee cases.

According to Salvaty, under the new policy, Title IX officers review student-on-student sexual violence claims under the same procedures across all UC campuses.

“Those are some big changes that come to mind,” Salvaty said in an email.

While Salvaty could not speak about specific cases, she said cases reviewed under the older policy could not be reconsidered a second time, even though policies have changed.

“I assume that if a matter was investigated and adjudicated under a then existing process, it could not be investigated again under a new process,” Salvaty said in an email.

Salvaty said, however, that consequences for violators may differ depending on each university because decisions on penalties are decided upon by the supervisors of each case at the university, not the Title IX officers and investigators.

This can result in varied forms of punishment for UC staff and faculty members.

The UCOP Task Force recommended that each UC campus increase sexual harassment and assault training amongst staff and faculty and create a Campus, Advocacy, Resources and Education (C.A.R.E.) Advocate on each campus to help survivors of sexual violence and sexual harassment, which UCSB has instated. They also recommend the development of a campus Peer Review Committee to review final investigation reports and advise the chancellor on disciplinary action.

The UC campuses are currently in the process of implementing all the Task Force’s recommendations.

I suspect but cannot prove that another Task Force is not what the UC needs. They might look instead at providing better access to, and awareness of, mental health services for young women suffering from BPD and the like.

Above individual is a Narcissistic Sociopath who has a chilling predatory look, follows and stalk people into the elevator with a total disregard of others, highly aggressive and manipulative, has no remorse no conscious but a blow up grandiose fully delusional, have no friends, pity plays and all the signs add up to it. Good luck explaining to people what you did. Five years later, still low. Go explain your behavior to your advisor and the chair and anyone else in the department. You just don’t stalk and harass other people who doesn’t even know you to begin with, and… Read more »

You sound like a sexual predator, it’s funny how sociopath likes to paint others have mental issues especially boarderline.
Next time you harass someone, make sure your mask doesn’t slip.