The Daily Nexus
Science & Tech
Scent Trumps Attraction When Searching For a Mate
March 9, 2017 at 5:53 am by Jacqueline Wen

Looks aren’t everything. For plant-eating stick insects, commonly known as “walking sticks,” scent is another important factor in their sense of attraction.

With colleagues from 10 universities in North America and Europe, UC Santa Barbara biologist Cristina Sandoval used stick insects belonging to the Timema genus as a research model to explore what drives the formation of new species.

The paper explains the walking sticks’ ability to differentiate between, and show a preference for, mates from the same species, despite deceiving looks.

“Researchers have found that walking sticks chose to mate with partners with a similar smell or perfume,” co-author Sandoval, director of the Coal Oil Point Reserve, one of seven UC Natural Reserve System locations managed by UC Santa Barbara, said.

The study is a result of nearly two decades’ worth of data collected from over 100 populations of Timema stick insects of 11 species in the wild and analyzing their DNA. In the DNA analysis, the investigators sequenced more than 1,000 stick insect genomes — the complete set of genes an organism has — which allowed them to correlate DNA changes with differences in physical traits, including color patterns and scent.

In Timema walking sticks, color patterns are one indicator of the early phases of speciation, or the formation of new, distinct species.

“Walking sticks from different populations diverge in color to match different host plant species,” Sandoval said. “This is driven by visual predators, which eat more of the walking sticks that don’t match the plant [color].”

The other trait representing likely divergence in populations is scent. After observing that stick insects belonging to the Timema genus were averse to mating with individuals from different populations and species, researchers found that their preference to mate with members of their own population was based on chemical compounds on their skin, which affected their smell. 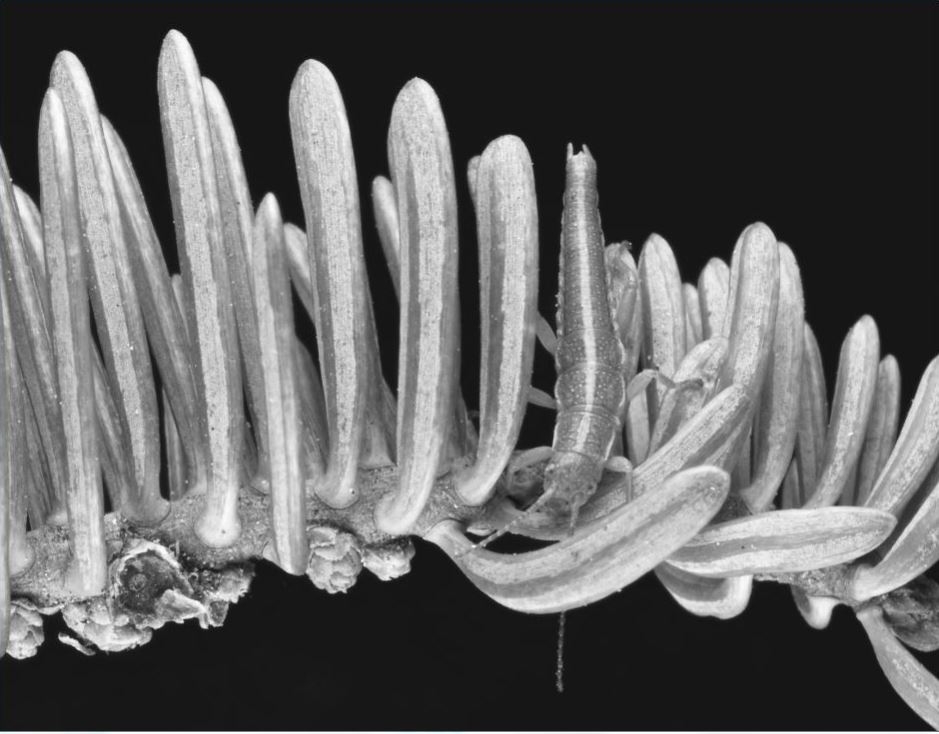 Above, a Timema cristinae is able to hide itself from potential predators by camouflaging with the plant. In addition to physical similarity these insects also prefer scent similarity. / Courtesy of M. Muschick of University of Sheffield

The scientists investigated which of these traits corresponded to variations in the insects’ DNA across a larger portion of their genome.

“The idea is that the larger the change [in the DNA], the more important is that trait in building up the changes in the genome to result in the species becoming different species,” Sandoval said. “We found that regions of the DNA responsible for the perfume causes differences between populations across more of the genome than did the regions responsible for color pattern. We suspect this is because the perfumes reduce mating between populations, thus allowing their genomes to diverge.”

When female stick insects were perfumed artificially with chemicals from either their own or another species, the scientists discovered that this directly affected the level of attraction males demonstrated towards them.

However, scent is not guaranteed for species differentiation. Occasionally, stick insects will still mate between populations despite being chemically different.

From an evolutionary standpoint, the ability to avoid mixing genes with other species may benefit future generations of the species through the evolution of characteristics advantageous to survival. Natural selection contributes to this. For example, if two insect populations, one red and the other yellow, live in a habitat where birds prefer the taste of yellow bugs, it is advantageous for the red insects not to mate with the yellow ones since their offspring may be yellow.

“Natural and sexual selection are two of the mechanisms by which Timema walking sticks evolve differences between populations and among species,” Sandoval said. “Another mechanism is genetic drift: when populations or species are isolated by physical barriers, like a mountain.”

Although it is not known for certain whether the chemical compounds have other purposes besides helping the stick insects distinguish between populations, the researchers have an idea based on their function for other insects.

“In other insects, the chemical compounds on the skin have been found to play a critical role in desiccation resistance, meaning they prevent the insects from drying out,” Sandoval said. “Thus, it is possible the chemical compounds promote adaptation to climatic conditions, although we need to do further experiments to test this possibility.”

The study has been published in the journal Nature Ecology and Evolution.