The Daily Nexus
Science & Tech
Researchers Analyze Vision and Attention after Exercise
March 9, 2017 at 5:44 am by Aimee Miller

Physical activity has been acknowledged as highly advantageous for both body and brain. Exercise has innumerable benefits, ranging from tangible health effects like fitness, to memory improvement, to self-reported positive effects on attitude. Irrespective of whether the consequences are physical or mental, exercise has beneficial short and long-lasting effects.

The short-term effects of physical activity can be studied at the cellular level. When animals engage in physical activity, it induces a state of arousal. This state of arousal is associated with a release of a variety of neurotransmitters, which consequently change brain excitability. Ultimately, changes in the excitability of neurons can alter how information is represented in the brain. 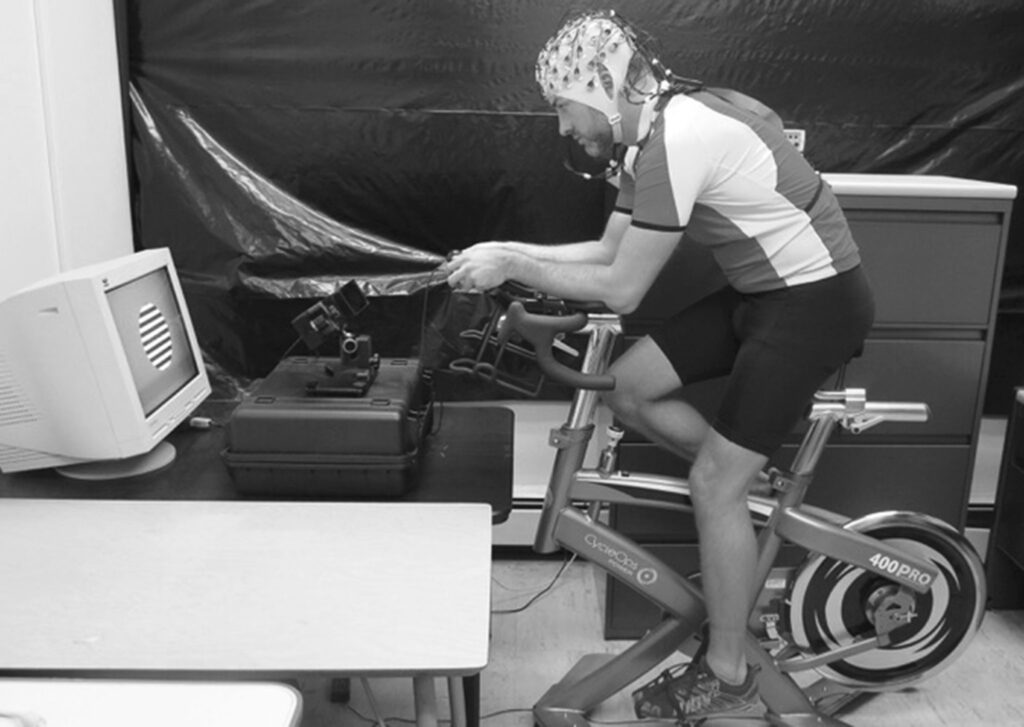 Participants of the study would ride a stationary bike as they viewed an image on a computer. / Courtesy of Journal of Cognitive Neuroscience

Previous research in animals has shown that variations in behavioral state have specific, dramatic effects on brain function. The studies show that there are considerable differences in brain responses to specific visual stimuli when animals are moving versus why they are not. Inspired by these studies, UCSB psychologists Barry Giesbrecht and Tom Bullock designed an experiment to determine how exercise impacts vision in humans.

In order to determine the specific effect of arousal on human cognition, the researchers took a closer look at enhancements in neural activity. Eighteen subjects participated in the study in which they rode stationary bikes and wore wireless heart rate monitors and an electroencephalogram cap to measure neural responses. The neural responses were assessed at three various states: brief bouts of high intensity exercise, low intensity exercise and at rest.

While on the bike, the participants performed an orientation discrimination task.

“On a given trial, the subjects were presented with a series of black and white bars that were in a particular orientation and flickered at a particular frequency,” Giesbrecht said. “That frequency drives the neural response; the flicker occurred 15 times a second, so in the visual cortex the neural responses actually oscillate at 15 times a second.”

“In the visual cortex, we know that various populations of neurons prefer stimuli of a particular type. Specific neurons will respond to some orientations, but as you move away from that orientation, the response falls off,” Giesbrecht said. “So you get what’s called a tuning curve. Using computational models, we can essentially estimate what those tuning curves might look like.”

Utilizing these mathematical models to apply the imaging data, the researchers were able to assess the specificity of the neural response to a particular stimulus. What they found was that the peak response of the tuning curve was enhanced when subjects were engaged in low intensity exercise relative to rest and high intensity exercise.

This analysis showed that low intensity exercise induced arousal in the visual cortex, which is the part of the cerebral cortex that helps process visual information. The induced arousal enhanced the neural excitability in a very specific way for the preferred orientation.

“There is long standing evidence in the literature that suggests that there’s this relationship between arousal and performance that follows an inverted U, and some people have now translated that into relating to neural activity as well,” Giesbrecht said.

This inverted U allows the results to be interpreted through the lens of optimality. It demonstrates that there is an ideal level of arousal that leads to enhancement in neural activity.

Giesbrecht highlights the applicability of this research by using riding a bike at UCSB as an example.

“A lot of what we know about attention comes from studies where people are just sitting in a room, in a low-stress and low-arousal state, but when you’re riding your bike along the bike path, your ability to attend to the environment there is going to be determined partly by your behavioral state,” Giesbrecht said.

We do not fully understand how those state changes can influence cognition. This research is significant because it is a small piece of the puzzle that sheds a little bit of light on how global changes in behavioral state — like riding your bike through campus — influence brain activity and cognition.

In addition to the significance of the research from a fundamental perspective, the researchers are excited about discovering how these changes that occur with brief bouts of exercise relate to changes that occur with practice. There has been much interest and excitement in brain training games to strengthen cognitive performance, but Giesbrecht emphasizes the narrow range of effect the games have.

“The problem with those games is that they don’t show a transfer, and by transfer I mean you get better on that particular training task, but it doesn’t necessarily transfer to other tasks,” Giesbrecht said. “So we think that exercise has the potential to be a more general, better way of enhancing your cognitive performance.”