The Daily Nexus
Spoken Word and Poetry
Dope Metaphors Makes a Triumphant Return
March 9, 2017 at 5:49 am by Allie Graydon

As Week Eight loomed over UCSB this past Sunday, students across campus began to feel the pressures of impending deadlines and the regret of procrastinating for an entire quarter. Everyone has their own way of dealing with the end of the quarter. Some sob uncontrollably into their notes at 2 a.m. in the library while others consume enough caffeine and sugar to keep them awake for days. The Poet’s Club, however, had a different way of combatting the stress of classwork: by embracing their artistic talents at Dope Metaphors. As poet Jason Chun said of the power of poetic expression, “Sometimes we all need to go out and have a good scream.”

Dope Metaphors is a quarterly showcase of UCSB’s Poet’s Club, regularly hosted by board members and leaders Frankie Cunningham and Sam Crane. At the latest event, students enjoyed hot coffee and cookies in the atmospheric light of the Hub as the poets presented a night of spoken word performances with the occasional musical interlude. Crane kicked off the night with his usual friendly demeanor. After hyping up the crowd, he explained, “You’re gonna see a lot of stuff up here tonight, stuff that people worked really hard to create so … you might also see stuff that makes you uncomfortable or that might be a little weird.” “The uncomfortable” was an important part of the evening, as poems ranged from political to personal and often served therapeutic purposes.

Jason Chun’s dynamic voice created conflict onstage in his poem “No One Attended the Coronation.” Chun switched back and forth from a nagging, angry shout, like a parent scolding a child, to a monotone recitation of the oath of office of the president of the United States. The contrast between the two personas was jarring, as Chun would yell repeated phrases like “Don’t lie!” The political implications were clear, as the poet stated false statistics about the attendance at Donald Trump’s inauguration while his other persona admonished lies and liars. The poem, with its presidential references, served as a commentary on the false reports and controversial statements made by Trump’s administration. Chun’s final chilling words, “so help me God,” not only echoed the end of the presidential oath, but also doubled as a call for help, expressing fear for the future. 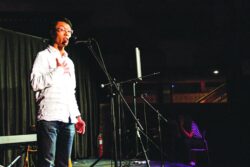 As the poems got more personal, Frankie Cunningham brought tears to the eyes if every listener with his poem “Kenny.” The poem was dedicated to Kenny Yun, a former UCSB student who recently passed away. With a shaking voice and eyes glimmering with tears, Cunningham began his poem with the official report of Yun’s death. He contrasted this sterile and objective statement with a passionate and sorrowful account of his own reaction to his friend’s death. He quoted the words Yun said to him a few days before his death and read the last text he received from the late student. The juxtaposition of casual, friendly conversation and the solemnity of death signified the fragility and value of life.

Kyle Anderson’s poem, “The Sisters Grimm write a modern-day fairytale” also captured a kind of personal grieving, as she described a traumatic experience with fairy tale metaphors and imagery of ghosts. The use of fantastical metaphors conveyed a sense of disbelief at reality, a sense that the speaker broke through as she cries, “the end … no!” The poetry performed throughout the night, like Anderson’s, conveyed a sense of healing and necessary expression in times of conflict. Alex Desales, another poet, stated, “Poetry embraces the freaks and the outcasts and allows them to tell their stories.” In his praise of all of the members of the Poet’s Club, he emphasized the bravery of those baring their deepest emotion for the public to hear.

Poetry was not the only way in which performers unleashed their creativity. Musicians took the stage throughout the night, adding to the overall coffee house vibe of the evening. Soline Daury created a relaxing environment with her soft, clear voice and mellow guitar. She played songs with simple chords and smooth melodies, letting her voice remain the focus. She sung with short, quick notes and a jazzy inflection with delicate vibrato on the longer notes reminiscent of retro styles.

Andrew Manos got the audience whistling and clapping with his improvisational piano piece. Before playing, he explained, “I like jazz, but I was trained classically, so it’s kind of hard. It’s kind of like a ballerina learning how to dance hip hop.”

Despite his musical origins, the jazz piece demonstrated a sense of passion and fun as his shoulders bounced in time with the quick, pounding rhythm. The audience tapped along with their feet. The music grew more dynamic and invigorating as Manos added pauses in the music for suspense, starting back up again with powerful chords. The freeform style not only demonstrated Manos’ technical skill, but it also infused the music with his own personality.

This Dope Metaphors showcase, more than any other, felt like a cathartic experience for everyone involved. Performers and audience members shared tears and laughter and new perspectives and an overall appreciation of art through the process of expression. It is a tough time for many, whether because of the pressures of the outside world or simply the pressure of finals, and sometimes it takes the creation of art to get us through.