The Gauchos have defeated just one team currently ranked in the top 15 by the AVCA Division I-II coaches, and that team, USC, wasn’t even ranked at the time. If UCSB wants to stop its rankings slide, which has seen the team fall from 11 to 15, a big win over a ranked team would be a good place to start.

Despite their 1-7 road record, the Gauchos’ return to Rob’s Gym should be beneficial, as they are 6-3 in home games and UCSB is looking to improve upon its 8-10 and 4-9 conference record. 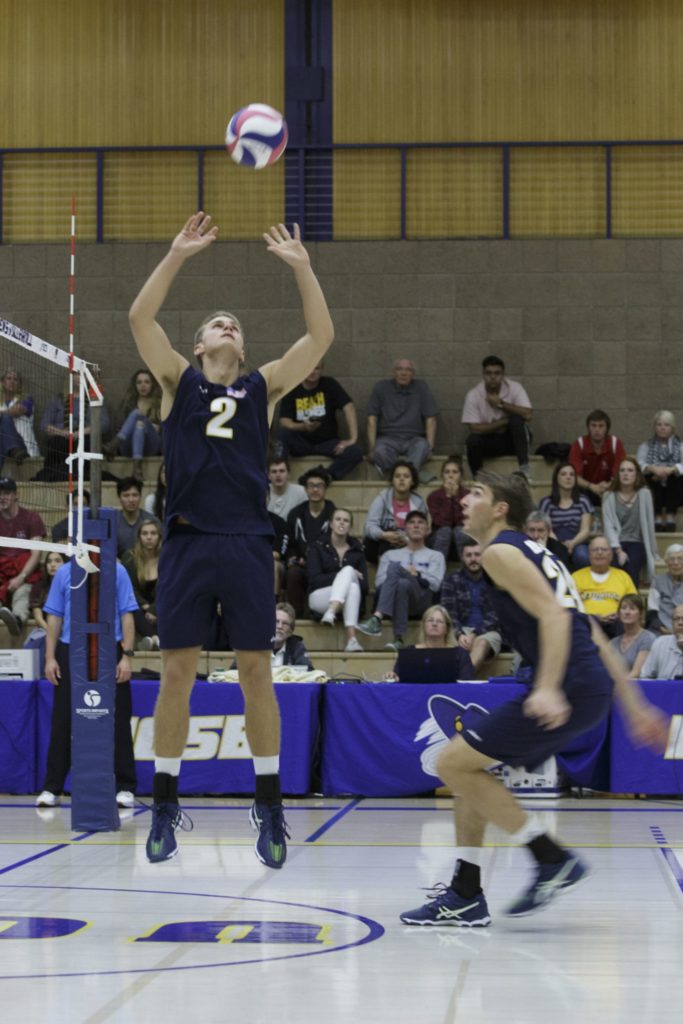 Luckily for the Gauchos, they’ve got two opportunities to do just that this week.

First up is No. 11 Cal State Northridge, who owns a 12-7 overall and 5-7 conference record, good for seventh place in the MPSF.

CSUN has had a bit of an up-and-down season, with wins over seventh-ranked UCLA and eighth-ranked Stanford, but also losses to Cal Baptist and UC San Diego, both unranked.

Buoyed by 26 service errors from the Anteaters, CSUN came within inches of pulling off what would have been a significant résumé-builder of its own.

Instead, the Matadors turn to the Gauchos looking to bounce back from defeat. CSUN operates a two-pronged attack, with sophomore outside hitter Dimitar Kalchev and junior opposite Arvis Greene accumulating the Lion’s share of the team’s kills.

Kalchev, a 6’4” product of Kardzhali, Bulgaria, has also racked up 51 service aces so far this season. Not only is that tops on the team, it tops in the nation, seven aces ahead of second place Nicholas Szerszen of Ohio State.

Almost every kill scored by Kalchev and Greene has come off of an assist from sophomore setter Sam Porter. Porter has piled up 669 assists over the course of the 2016-17 season, and he is fifth in the nation with 10.62 assists per set.

As a team, the Matadors have been particularly effective on the attack, with the third-best hitting percentage in the country at .348. That sparkling is what enabled CSUN to crush Stanford and eke out a win over UCLA, and the Gauchos will have their work cut out for them trying to counter that accurate attack.

UCSB will have to find a way to bring the Matadors’ percentage down, however, if they want to stand a chance of picking up that all-important signature win.

If that isn’t enough, they might have to do it without star redshirt senior outside hitter Jacob Delson, who missed both of last weekend’s games with an ankle injury and is considered questionable for Wednesday’s match.

Delson, second in the NCAA with 4.43 kills per set, has been the key to the Gauchos attack all year long. His absence would be a major blow to UCSB’s chances on Wednesday, although the two games he missed over the weekend have provided the team with some time to adjust.

While Delson is questionable for Wednesday’s match, it seems likely that he will be closer to probable for Saturday’s match against Lewis, currently the fifth-ranked team in the nation. The Gauchos will certainly need him against the Flyers, who have five wins over ranked teams.

Lewis has a busy week ahead of them, even before they come to Santa Barbara. The Romeoville, Illinois-based team begins a three-game West Coast trip with a match against UCLA on Wednesday, followed by a match against USC on Thursday before taking on the Gauchos on Saturday.

That’s three ranked teams in four days for the Flyers, and all are over 2,000 miles away from home. That might play right into the Gauchos’ hands, as they’ll host Lewis at the end of the grueling stretch.

The Flyers may very well have one of the more balanced attacks that UCSB will see all year. Four different players have over 100 kills on the season, with opposite Mitch Perinar the leader in the clubhouse at 225 kills.

Perinar and his three comrades (freshman Ryan Coenen, senior Jacob Schmiegelt, and freshman Kyle Bugee) have benefitted from the prowess of sophomore setter Matt Yoshimoto, who leads the team with 712 kills.

UCSB’s rough middle-of-the-season stretch has pushed the Gauchos down the rankings, but they have a chance to turn it around with two résumé-building wins this weekend. It won’t be easy, but then again, no résumé-builder ever is.