The Daily Nexus
Volleyball
Gauchos On Road at Penn State
March 3, 2017 at 3:25 pm by Spencer Ault

The road has not been kind to the UCSB men’s volleyball team so far this season. The No. 13 Gauchos are just 1-6 in away games compared to 6-3 at home, and they’ve yet to beat a single ranked team in a game outside of Santa Barbara. 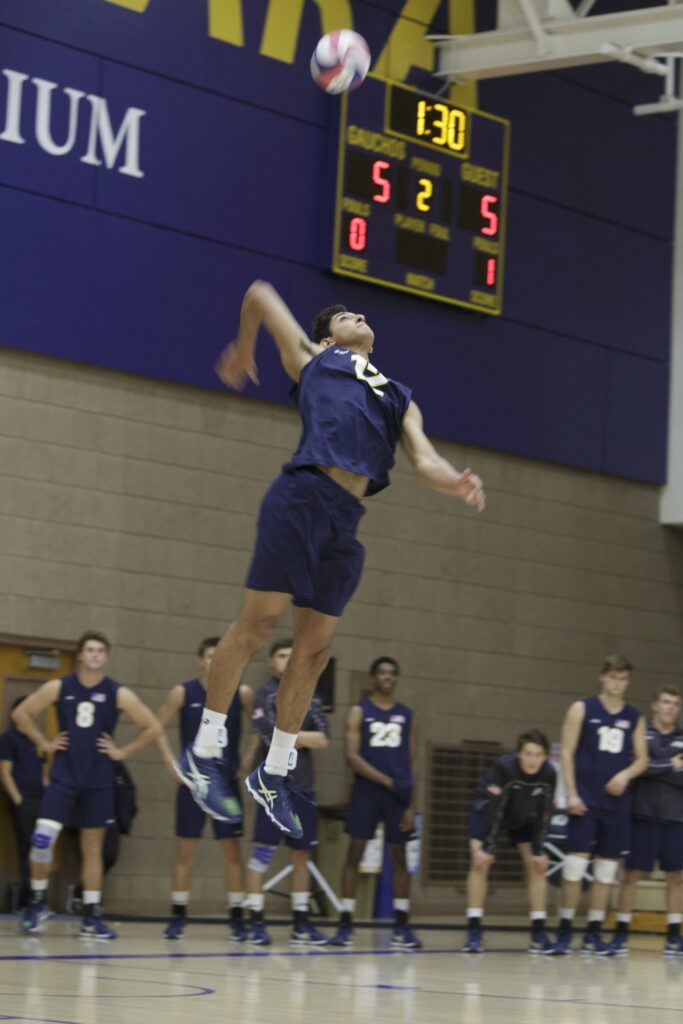 UCSB will have a chance to change that on Friday evening when it takes on No. 15 Penn State in University Park, Pennsylvania, approximately 2,667 miles away from the Santa Barbara campus.

The distance will be the furthest away from home the 7-9, 4-9 Gauchos have been so far this season, surpassing even the two games UCSB played against the University of Hawaii in Honolulu, roughly 2,473 miles away.

Penn State will host UCSB in hopes of strengthening its 11-6 and 6-2 record in EIVA play. The Nittany Lions have won eight of their last 10 matches.

Those two games in Hawaii, just like most of their road games, didn’t go so well for the Gauchos, but there’s a decent chance Friday’s game will be different. UCSB’s one road win this season came against UCSD, who are just outside the top 15 in the NCAA men’s volleyball ranking.

All those road losses, on the other hand, came against teams ranked above the Gauchos. The good news for UCSB, then, is that Penn State is one spot below the Gauchos.

Still, of course, simple rankings aren’t going to determine Friday’s game. If UCSB wants to notch its second road win in a row, the team is going to have to keep up the consistency established in its last two games, despite including its five-set loss to UC Irvine.

Friday’s road win over the Tritons was a dominant straight set, little sweat performance that snapped the Gauchos’ seven-game losing streak. Saturday’s effort against now-No. 6 UC Irvine was less successful, as the Anteaters pulled out a 3-2 win, but it was no less an impressive effort.

UCSB hit at a solid .313 clip, and red shirt senior star hitter Jacob Delson had a career-high 34 kills in the loss, which went to extra points in the decisive fifth set.

The Nittany Lions are gradually building momentum as they have won their last two matches. It should be noted, however, that none of those games were against ranked teams. Friday’s matchup, then, will be a chance for Penn State to prove itself against a ranked team for the first time since their loss to Ohio State in late January.

Rather than rely on just one hitter to power the attack, Penn State has counted on three main players to rack up the kills: redshirt freshman opposite Calvin Mende, redshirt sophomore outside hitter Lee Smith and senior outside hitter Chris Nugent.

Assists, on the other hand, have been a more unimodal production. Redshirt freshman Luke Braswell has 593 assists, far more than any other Nittany Lion, including a 63-assist effort against USC.

Serves have been a major point of emphasis for UCSB this season, and success in that department was a major driving force in the Gauchos’ strong performances against UCSD and Irvine. More of that would be a big help on Friday night, especially in such a foreign environment.

Just service success won’t be enough for UCSB to grab its first win against a ranked opponent this year. Another dominant showing by Delson, who had a double-double in kills and digs against UCSD, will likely be necessary, as well as big complementary games from hitters like sophomore outside hitter Corey Chavers and freshman middle blocker Keenan Sanders.

Only a couple hours after they wrap up against Penn State, the Gauchos will have to shift gears to take on Division-II Lees-McRae College on Saturday afternoon at University Park. The Bobcats are 5-10 on the season and 3-7 in Conference Carolinas play.

Lees-McRae will itself be coming off of a challenging match against eighth-ranked Stanford. Senior outside hitter John Sobel will be the frontman in the Bobcats’ upset attempts, as he leads his team with 187 kills this season on a 3.34 kills-per-set ratio.

Freshman setter Reto Pfund has had the assist on almost every single one of those 187 kills and has posted 549 assists, good for 9.80 a set, this season.

The Bobcats don’t look like too much of a challenge for the Gauchos on paper, but as every coach in America would say, games aren’t played on paper. Coming right on the heels of the Penn State match and taking place across the country, this match has all the makings of a trap game if UCSB isn’t careful.

The Gauchos take on Penn State on Friday, March 3, in University Park at 4:30 p.m.