The UCSB men’s tennis team’s regular season continues with a short turnaround this week as Santa Barbara will host Loyola Marymount this Saturday, followed by No. 24 Oregon on Sunday.

Heading into this weekend, UCSB is coming off a noteworthy doubleheader weekend. The Gauchos previously split last weekend’s pair of matches, thus bringing UCSB’s overall record to 5-2 on the season. 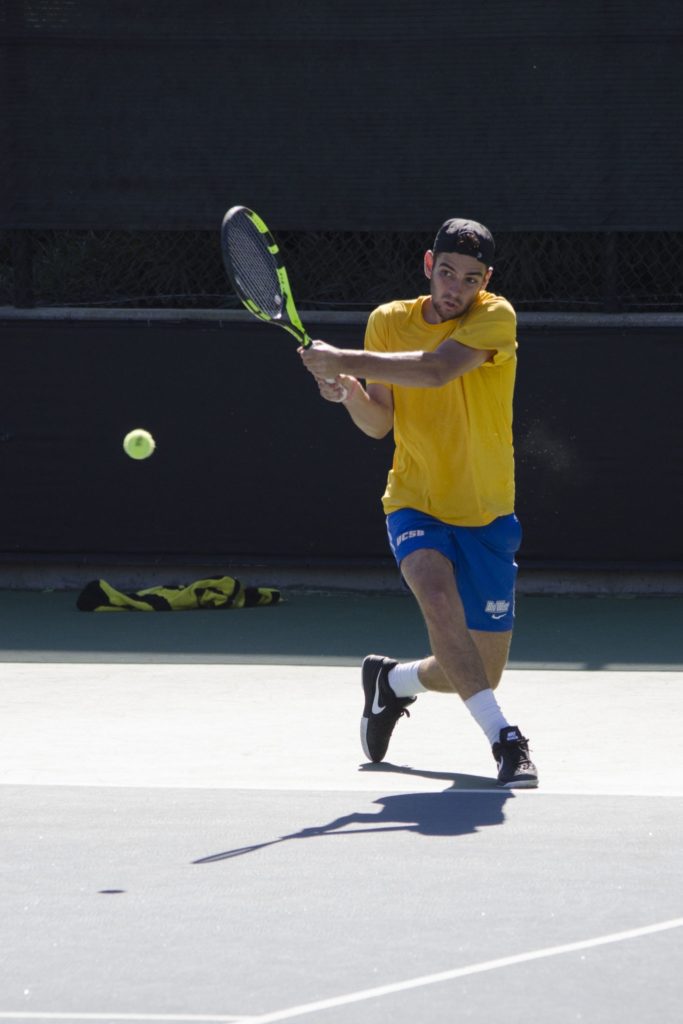 The Lions visit UCSB at 3-5 overall on the season, while Oregon will look to improve upon its 10-2 record.

To quickly summarize UCSB’s tennis campaign through February, results remained positive as the team posted a 3-1 record during the month. The remarkable No. 1 doubles slot of junior Simon Freund and senior Morgan Mays are now en route to a top-10 ranking as they remain undefeated.

The team will surely appreciate that seven out of eight of their matches during the month of March will be held in Santa Barbara, granting the Gauchos some much needed rest from traveling on the road as well as home-court advantage.

This Saturday, they will face off against Loyola Marymount University. The Lions are coming off a 5-2 home victory over the University of Arizona.

After a delay that postponed the meet for a couple of hours, LMU started the meet off very strong by sweeping the entire doubles portion of the competition; thanks to a 6-3 finish by Max Kaiser & Nick Borchenko, and a 6-2 for Ryan Brown & Luke Bohuslav. The singles portion was just as much in favor of the Lions.

After a tough three-set match, Kaiser’s 6-3 / 2-6 / 7-5 outcome earned his team the final win necessary for the sweep, ending the day with a win. LMU will host UC Davis this Thursday before heading over to Santa Barbara for the weekend.

Meanwhile, Oregon will enter Sunday with the momentum of its two-match winning streak and will be in search of its first road win this season. The Ducks remain undefeated at home after last Sunday’s 7-0 sweep over No. 42 Drake University.

Oregon began the day by claiming the doubles advantage point for the ninth-straight meet thanks to its top court of senior Jayson Amos/sophomore Armando Soemarno, and No. 2 juniors Akihiro Tanaka/Simon Stevens. Oregon’s singles play went just as, if not more, smoothly with a clean sweep.

Worth mentioning would be the talent of sophomore Thomas Laurent who recently earned his 15th straight singles victory, placing him tied for first as the biggest streak in Oregon’s history.

Altogether, UCSB will have to be on their A-game, considering they’ll have to work with this short week. Consistency is important entering this doubleheader, and it seems that taking the early doubles advantage point has frequently done the Gauchos justice.

Key matchups include the Gauchos’ singles consistency over Loyola Marymount and whether or not they can halt an on-fire University of Oregon doubles program.

UCSB men’s tennis will host the first of its home series meets this Saturday, March 4, against Loyola Marymount University at 1 p.m., then again on Sunday, March 5, versus the University of Oregon at 1 p.m.