The Daily Nexus
News
Students Meet Under Storke Tower to Rally Against ‘Dirty Oil’
March 2, 2017 at 6:40 pm by Melody Pezeshkian and Deepika Chandrashekar 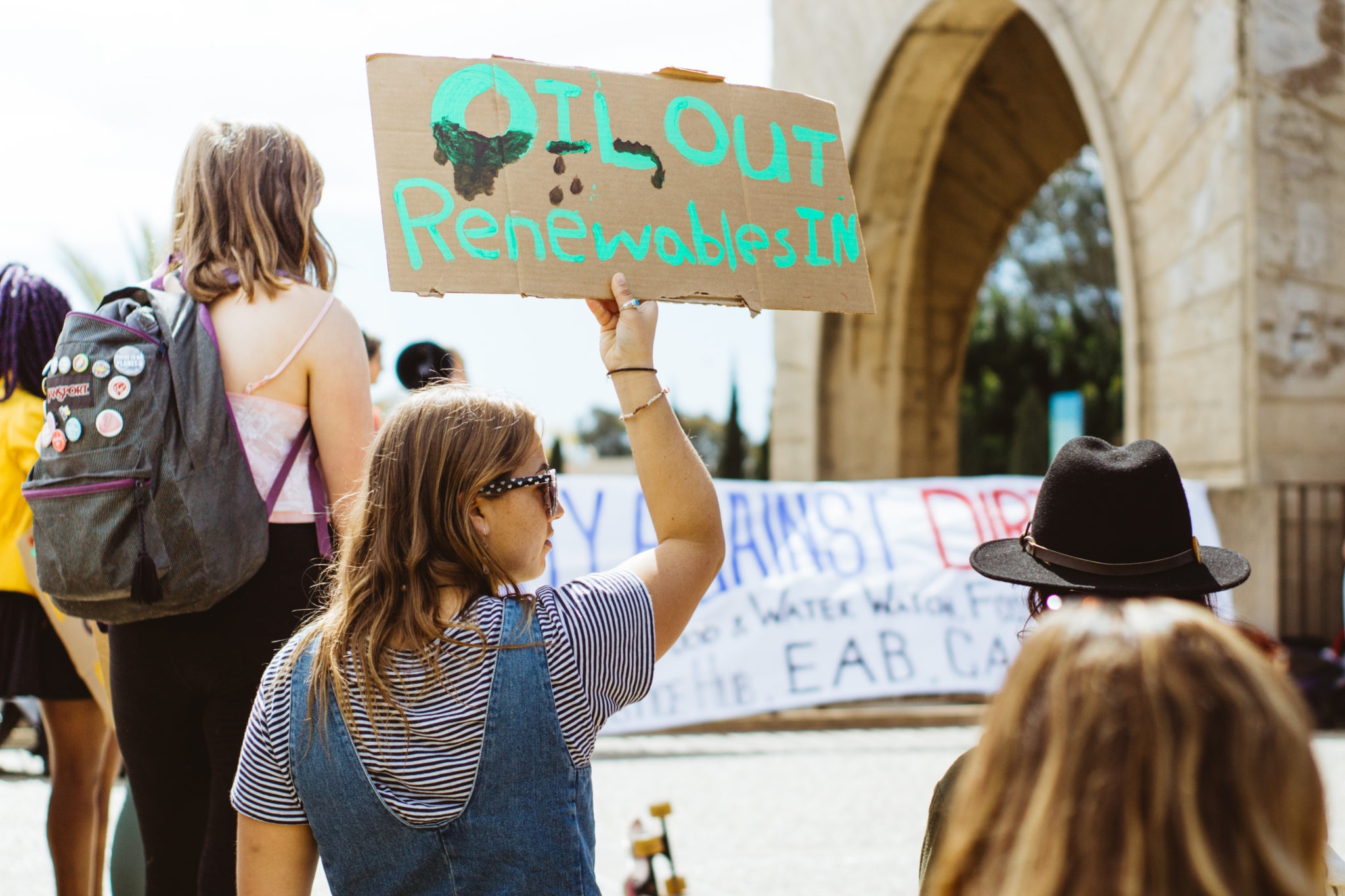 The protester held signs with phrases such as “Oil Out Renewables In,” “No New Wells” and “Rally Against Dirty Oil.”

Speakers gathered to inform UCSB students about what they can do to prevent climate change and environmental degradation as a result of fracking and oil transportation. The group pushed for 100 percent clean renewable energy in light of Santa Barbara’s long history with battling crude oil.

The first oil spill in Santa Barbara, and the largest-ever off of California’s coast, occurred in 1969 after the blow-out of an offshore oil platform. Decades later, the Refugio oil spill in January 2015 left the Gaviota coast covered with crude oil. The region is still suffering its aftereffects.

Many of the speakers spoke about the Trump administration’s approach to climate change and environmental policy, voicing their discontent and prompting the crowd to boo the president’s actions. 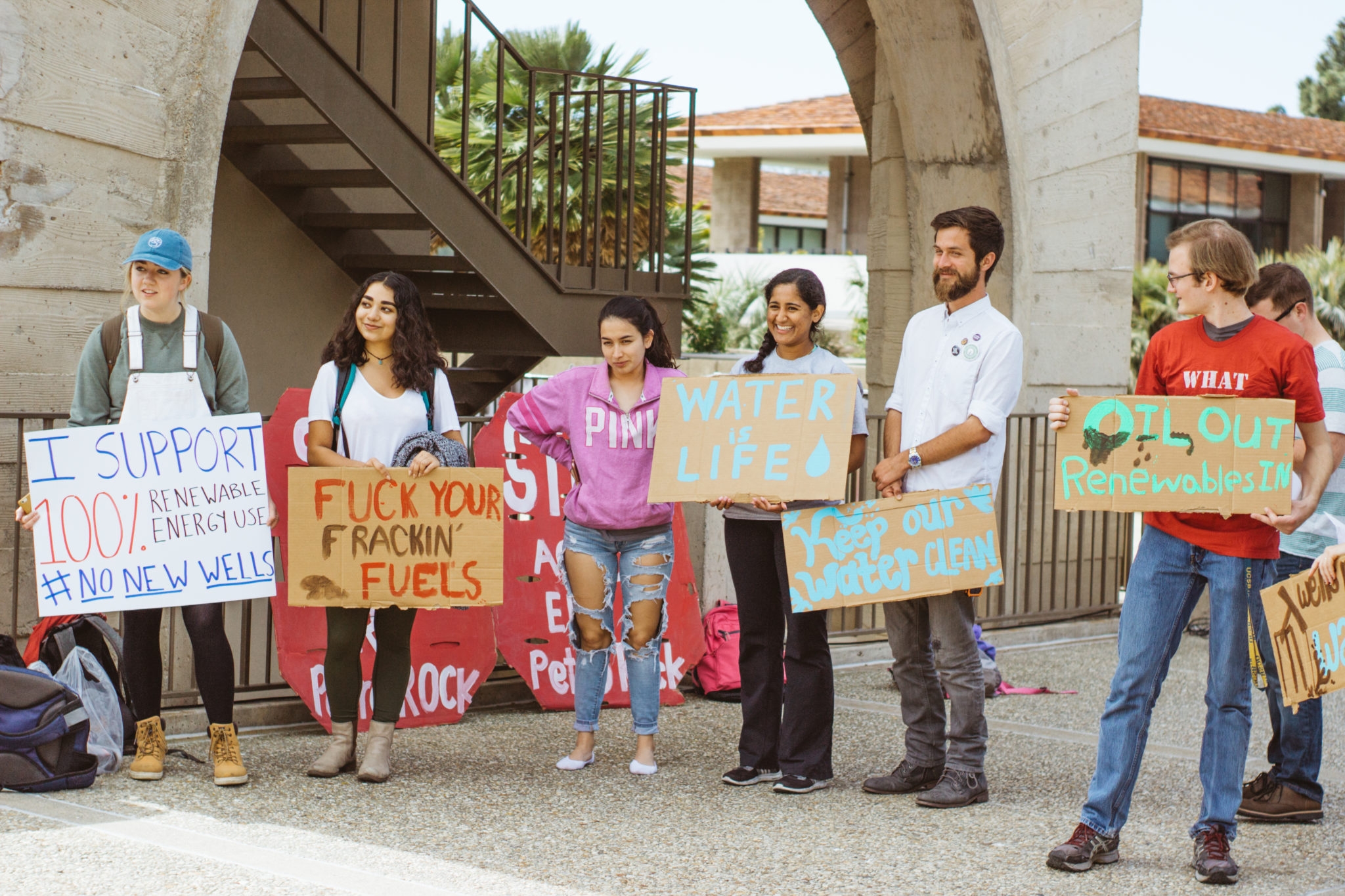 Wendy Mota, a representative from Congressman Salud Carbajal’s office, spoke on behalf of the congressman. She touched upon Carbajal’s introduction of a bill in January that would ban future offcoast drilling.

“Santa Barbara has a long history of leading the charge against oil drilling,” said Mota. “We’ve witnessed our wildlife soiled by oil, not once, but twice.”

Emily Williams, a graduate student in the geography department, discussed global efforts to curb climate change. She spoke of the two-degree Celsius goal, an agreement reached among nations at the Paris Accords in October that strives to keep climate change under two degrees Celsius.

Environmental activists believe two degrees is still too drastic of a change. Williams said the problem at hand is that “Trump wants to pull us out of the Paris Accord, and we could be on a trajectory from anywhere between 3 to 5 degrees of temperature rise.”

The climate change increase goes hand-in-hand with the dirty oil and fracking that these organizations are trying to stop.

One poster read, “Stop AERA, ERG, Petro Rock,” calling out the names of oil companies that want to build over 750 oil wells in Santa Barbara County. These oil well projects are going up for approval in front of the Santa Barbara County Board of Supervisors at the end of this year.

Speaker Cameron Gray, a member of the Community Environmental Council, said there are “plenty of reasons to be optimistic but we cannot also be complacent.”

“It’s time for all of us to step up and demonstrate local leadership,” he said.

Natalie Burrous, sustainability coordinator for the office of the Associated Students president, encouraged all students who wish to get involved to join an organization such as CALPIRG or A.S.

“It can be easy to be pessimistic, but nothing revolutionary has ever happened during a comfortable and easy time during history,” she said.

Wow – what an incredible waste of time.

All those who ride in a car, train or airplane and participated in this rally are flaming hypocrites.

they aren’t anti oil just against the more pollution based extraction methods. Your comment shows a lack or understanding and intelligence.

That woman in the PINK sweatshirt is such a dedicated environmentalist that her jeans are biodegrading as she is wearing them!