The Daily Nexus
Music
Shy Girls and Culver Provide Warmth for Perfect Park
March 2, 2017 at 5:36 am by Jasmine Rodriguez

The otherworldly presence of Shy Girls and Culver revived Friday’s star-saturated evening during I.V. Fourth Friday: Feels Fest. Not only was the lovely event musically catered, but A.S. Program Board also made sure to offer an interactive graffiti wall for any aspiring Basquiats to showcase their talents. The sleek acoustic set by the opening act, Culver, felt like the equivalent of a warm cup of coffee for the chilly night. The smooth production of Shy Girls set the night a flare, the crowd graced with smiles at the romantic lyrics Dan Vidmar translated from his mind into the microphone.

The precedent performer of the night Culver from Orange County somewhat outshined the main act by displaying his ability to sing a slew of cover songs at the drop of a hat. Culver brought the sparse crowd together and eradicated the awkward atmosphere that permeated the audience. The narrative of his set list dealt with heartbreaking scenarios and offered the audience a perspective into Culver’s mind. The intimacy between Culver and the 40 or so members of the audience was instinctively felt, as people sniffled, maybe due to the frigid weather or the solace they found in the sorrow radiating from his lyrics. Second-year biology major Chloe Anderson stated, “He [Culver] reminds me of an early Lewis Watson.”
A lengthy silence followed a round of applause after his third song of the night, in which Culver enthusiastically stated, “I’m gonna play yet another sad song!”
The onslaught of emotional songs basked in honesty provided a deepened connection between the audience and Culver compared to how the night’s headliner, Shy Girls, decided to approach the crowd. Due to the late arrival of Shy Girls, Culver had to extend his set by 15 minutes, in which he played Norah Jones and Tracy Chapman covers to keep the crowd attentive.
His rendition of Tracy Chapman’s “Fast Car” was halted as Culver respectively mentioned, “To be honest with you guys I can’t finish the song because, I genuinely forgot some of the lyrics. I don’t want anyone beating me up for messing up this song.”
The land of Portland conjures up beloved mental images of singer-songwriter Elliot Smith, the infamous feminist bookstore sketch in “Portlandia” and cold brew. Yet, the lovely Pacific Northwest town is also the origin of Dan Vidmar, the face of electronic R&B act Shy Girls. The performances of the night were split into two different factions, those of heartening ballads dealing with emotionally draining subject matter and those of entrancing dance melodies. 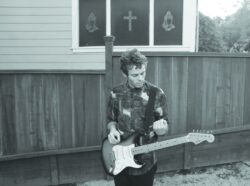 Shy Girls’ latest project, titled Salt, has Vidmar’s silky tenor radiating within refined percussion. The name “Shy Girls” might strike familiarity with the UCSB audience, as he lent his vocals to the previous Extravaganza headliner Odesza on the track “All We Need.” Vidmar’s R&B falsettos can easily be collaborated with the likes of Daniel Caesar or BadBadNotGood to make a hit. The minimalism entrenched in Shy Girls’ sound only adds to the meticulously produced foggy ambiance.
Vidmar took the stage and, with a breathy voice, coaxed the crowd to come closer so he could see their faces. With a Lorde-like hand motion, Vidmar from Shy Girls truly immersed himself in the essence of atmospheric music. Atmospheric music can often be labeled as rather “boring” and “dull” if you’re not on a substance-induced high. Despite this, Shy Girls had the entirety of the crowd moving to their eclectic sound in ways reminiscent of Taylor Swift’s infamous dances. Only accompanied by his guitar player, Vidmar’s vocals became increasingly intriguing, as the instrumentation highlighted his presence on stage.

The multifaceted track “Watercolor Dreams” from Shy Girls’ album Salt pays homage to Vidmar’s teenage years spent listening to Zeppelin and Pink Floyd. Straying from the safety net of the synth, Vidmar experiments with guitar riffs and drums to intertwine rock elements with a song dedicated to painting the false facades of people in a relationship. The soulful edge brought by Vidmar’s guitar performance highlights the pop melodies of songs like “Say You Will” and elicited a perpetual sway throughout the crowd.

Chiara Smith, a political science major, stated, “Besides the lack of people in attendance, all the performers put on great sets.”
Shy Girls concluded the night with an abstract performance of their hit “Second Heartbreak,” leaving a magical numb feeling that resonated with the audience. Everyone walked home in a state of bliss from the live, soul-warming music they witnessed. If you ever need an escape from a house party playing the same top-40 rap hits, support A.S. Program Board’s First Fridays and witness outstanding artists at Perfect Park.