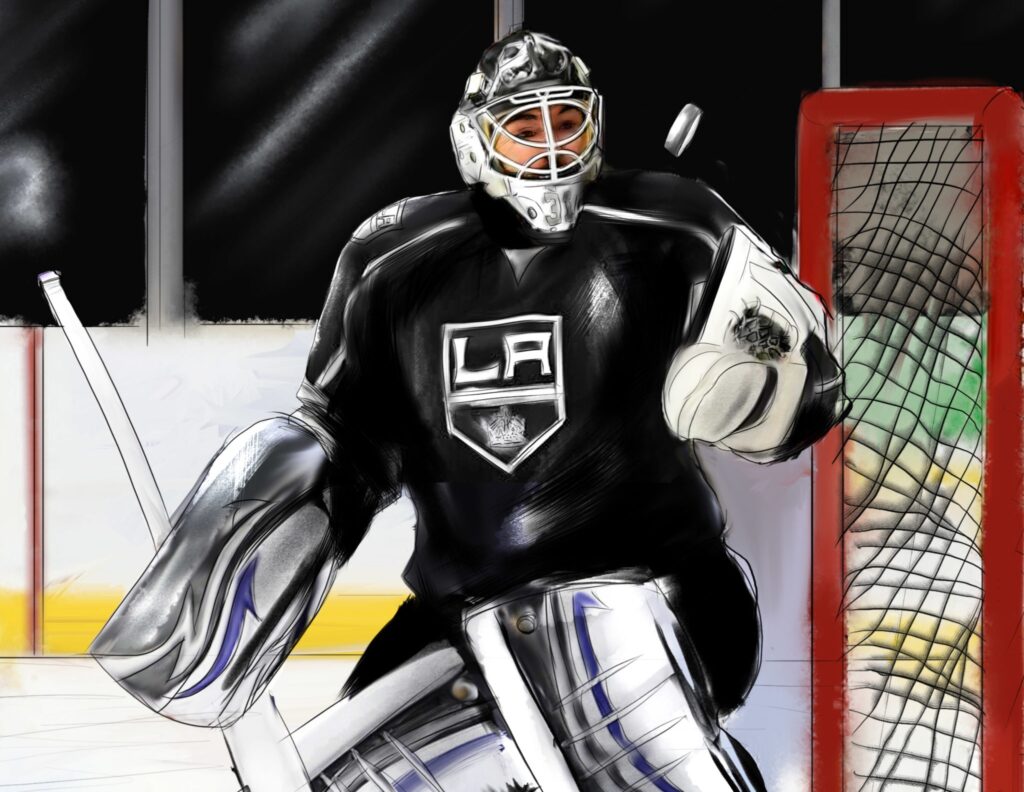 In a move that’s turning heads around the hockey world, the Los Angeles Kings acquired Ben Bishop from the Tampa Bay Lightning late Sunday. The 6’7” goaltender was sent along with a fifth-round pick in the 2017 draft in exchange for Erik Cernak, a defensive prospect groomed by the Kings, a seventh-round pick, a conditional pick and goaltender “St.” Peter Budaj.

The move completes St. Peter’s martyrdom after he essentially saved the season for the Kings when Jonathan Quick went down with a groin injury in the season opener against the Sharks. (However, “saved” may be too complimentary a term as the Kings now sit three games behind the St. Louis Blues for the second wild card spot in the West.)

Many have wondered why the Kings, one day after Quick returned from his long-term injury, would move for a second elite goaltender in Bishop and renounce any loyalty at the expense of Budaj.

First off, Kings General Manager Dean Lombardi is no stranger to making blockbuster deals at the deadline (March 1). In 2012, Lombardi traded defenseman Jack Johnson to the Columbus Blue Jackets for Jeff Carter, who is currently the second leading goal scorer in the NHL.

Carter proved to be an integral part of the team in their championship run later that year and has since molded himself into a team leader. In 2014 the Kings moved for Marian Gaborik, a star forward who would go on to lead the team to a championship with a league-high 14 goals in the postseason.

Lombardi’s luck would change in 2015 when he sent a defensive prospect and a first-round pick for Andrej Sekera, who proved to be a non-factor in the Kings’ dud 2014-2015 season.

Even given Lombardi’s propensity for big moves at the deadline, this one still baffles as the Kings’ problem isn’t letting in goals, it’s scoring them. Let’s dissect the trade to see what Lombardi may have been thinking when he pulled the trigger on this transaction.

Having a reliable goaltending tandem is never negative, but why would you choose to sit one when each of those goalies was Vezina candidates a year ago? It could point to some uncertainty regarding Quick’s health. With his jarring, athletic butterfly style, Quick is more exposed to the possibility of injury than a goalie with a stay-at-home, blocking style.

Quick’s groin injury this year was the most severe of his career, and the Kings’ primary concern should be to avoid a chronic injury that might detract from his play throughout the remaining six seasons of his contract. If Budaj seemed to be a competent safety net, Bishop is a brick wall in front of a maximum security prison.

Emotional attachment aside, the Kings didn’t have to give up a whole lot for “Big Ben” Bishop: they lost what was their third-string goalie at the start of the year, essentially traded up from a seventh-round to a fifth-round pick, gave up a defenseman (whom the team did not consider a top prospect) and a conditional pick. The conditional pick throws some salt into the mix, as it could soar to as high as the second round if the Kings do well in the playoffs.

From the Lightning side, Andrei Vasilevskiy is the face of the future; Bishop has spent a relatively large amount of time on the bench given his $6 million cap hit (20 percent of which the Lightning will retain as part of the deal) and is an unrestricted free agent at season’s end. They were going to lose him anyway; Budaj will be a great second goalie to have as the team grooms Vasilevskiy to be its No. 1.

As counterintuitive as it may seem, sporting two top-tier goalies may help to alleviate the Kings’ scoring troubles. The team’s dynamic shifts dramatically when Quick is in net. When Budaj was starting, many offensively minded forwards had to adjust their game to protect a vulnerable goalie situation (in terms of both efficiency and depth).

The Kings’ defense also had to double-down on their efforts and play a largely conservative game focused on protecting their goalie instead of creating scoring chances. With Quick in net (and now a “second” Quick in Bishop), the Kings can relax their style to generate more offense with the reassurance that reliable goaltending brings.

Here’s where Lombardi’s chess game gets interesting. The Kings have four double-header games of their remaining 20. Of those games, three(!) include a game against the team that may be standing in their way of a playoff spot: the Calgary Flames.

In conjunction with a fourth game against Calgary in the final week, these games present a possible plus-or-minus 16-point swing in the standings the Kings can’t afford to be on the wrong side of.

Additionally, the Kings take the top goalie on the trade block off the table for the Flames, a team that has given up the most goals of any team in playoff position in the Western Conference. Now every team the Kings play will have to face either Bishop or Quick, which is certainly not an enviable position to be in.

With two days left until the trade deadline, there is still a possibility Bishop is flipped to another team that would be willing to send a reputable forward to the Kings. Lombardi, however, has softened this stance, saying, “No, no. Bishop needs to play.”

So it seems the Kings will roll with two No. 1 goaltenders in a last-ditch effort to move into playoff positioning. As Kings fans mourn the sacrifice of St. Peter, a goalie who ascended to fan favorite as quickly as he was traded away, a new piece will be in place for a deep playoff run with Bishop.