The Daily Nexus
Science & Tech
Greater Success for Students with Learning Disabilities Linked to Applied S.T.E.M.
March 2, 2017 at 4:45 am by Jacqueline Wen

If yet more proof was needed to emphasize the importance of science, technology, engineering and math (S.T.E.M.), two UC Santa Barbara researchers have determined that taking applied S.T.E.M. courses benefits students with learning disabilities in their educational paths.

In conducting their study, Ph.D. graduate student Jay Plasman and Michael Gottfried, Plasman’s advisor and associate professor at UC Santa Barbara’s Gervitz Graduate School of Education, analyzed a national data set published by the U.S. Department of Education. Called the Education Longitudinal Study of 2002 (ELS:2002), the data contains over 9,000 high school sophomores’ transcripts, details their actions after high school and indicates if they had learning disabilities or what type of individualized education plan they were under.

In their evaluation, Plasman and Gottfried assessed whether these classes affected the graduation rate of high schoolers with learning disabilities, including if they helped prevent students from dropping out or increased their enrollment in postsecondary education and if it was associated in any way with their overall math test scores.

“We looked at the idea of this specific set of Career and Technical Education (CTE) courses, applied S.T.E.M., which includes things like information technology, computer information sciences, engineering technologies and how the design of those courses might specifically benefit students with learning disabilities,” Plasman said.

Applied S.T.E.M. falls under one of the 16 Career Clusters under CTE developed as an organizing tool for curriculum instruction. Tailored to support students in discovering their interests, it is intended to help them choose the educational pathway that will lead to success in high school and beyond. 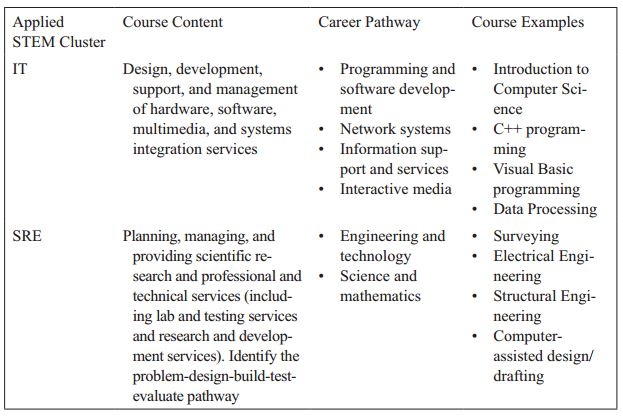 Above is an applied S.T.E.M. coursework taxonomy. IT is ingformation technolgy and SRE is scientific research and engineering. / Courtesy of Educational Policy

“Typical courses that might be considered applied S.T.E.M. would be, like, an introduction to computer programming [class] or a computer-aided drafting course that would fall under the engineering technologies,” Plasman said. “So those [are] kinds of courses that you still have to use logical thinking, but they also kind of focus on these problem-solving skills and really give you these practical skills that you can use beyond high school as well.”

“A lot of the accommodations that are recommended for students with learning disabilities are very similar to kind of what happens in those classes,” Plasman said. “The way these specific types of courses are designed, they’re meant to really be hands-on and applied learning and really make a connection between the practical and the theoretical.

“There are different learning styles; you need to not just lecture at kids, you have to allow them to do things as well, Plasman said. And you should allow them to be more involved with direct learning and kind of encompass all those different aspects into the course. Applied S.T.E.M. courses are designed so that they do allow the students to really get these applicable skills.”

In the ELS:2002 sample, approximately six percent of participants identified as having a learning disability, Plasman and Gottfried calculated that compared to the 12 percent probability of dropout for students with learning disabilities who did not take applied S.T.E.M. courses, those who did had a two percent chance.

Additionally, the research ended up being predictive of increased college-going behavior. For students with learning disabilities who took applied S.T.E.M. classes, the chances of going to college immediately after completing high school were 2.35 times greater than for those who did not. Within two years of high school graduation, they were still 2.23 times likely to enroll in college.

Having completed this study, Plasman and Gottfried continue to work on projects within CTE and applied S.T.E.M. A possible new focus for their studies on students with learning disabilities is tracking their academic behavior after high school.

“We haven’t yet looked at what happens after college so that’s something that we considered and we may do in the future. We haven’t looked to see what kinds of jobs they get after that,” Plasman said.

As of now, the researchers have shifted their attention to not only students with learning disabilities, but broadly all students, and are examining how CTE can help pupils graduate on time based on when in their high school career they took these courses.