President Donald Trump spoke at the joint session of Congress in Washington D.C. on Tuesday, discussing his first weeks as president and moving forward as a united nation. 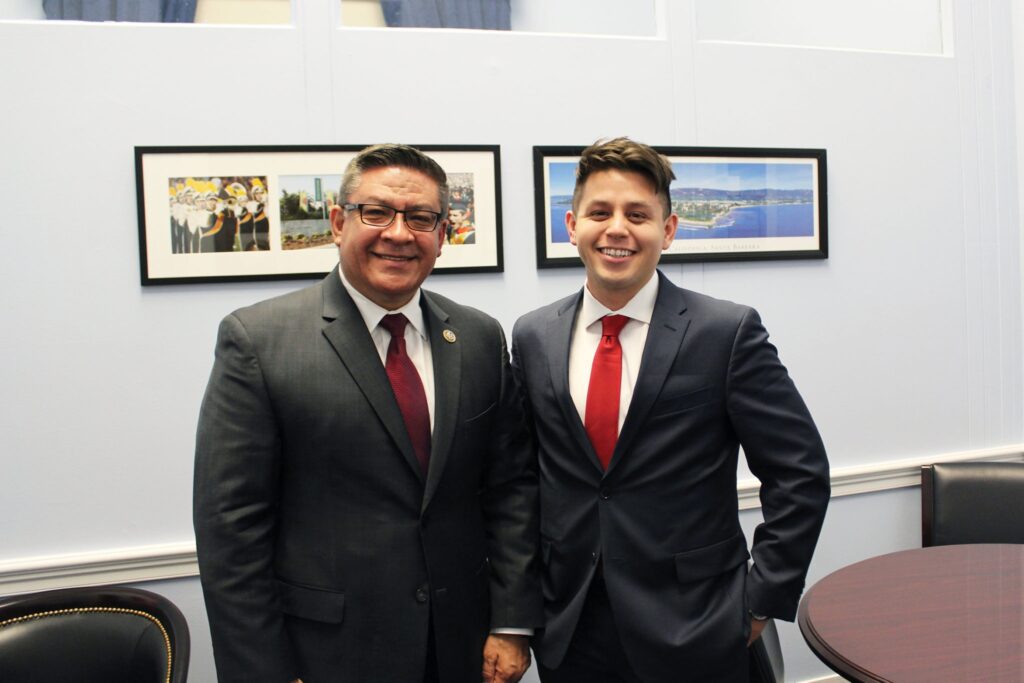 Izeah Garcia, a fourth-year history of public policy major, was at the heart of it all.

Congressman Salud Carbajal invited Garcia to the session due to Garcia’s work for the Democratic Party and student issues at a state and national level.

When he received the call from Carbajal’s office to join the congressman at the session, Garcia was on his way to D.C. to lobby legislators on student issues such as Pell Grant accessibility, protection of undocumented students and the protection of students in regard to student loans.

According to Tess Whittlesey, spokesperson for Congressman Carbajal, the congressman invited Garcia to the congressional session because Garcia “is an example of the value that immigrants and their families bring and enrich our communities.”

Carbajal and Garcia are both children of immigrant parents and first-generation college students, Whittlesey said.

“They asked me if I wanted to go because I worked with Salud on the campaign as an organizer,” Garcia said. “He knew my story; I’m the first in my family to attend university, and my parents are immigrants … so he figured it would match out well.”

Trump addressed his instated executive orders and plans for immigration reform, and he spoke of his plans to repeal the Affordable Care Act (ACA) and improve police relations with citizens. He called for a united nation and declared that “the time for trivial fights is behind us.”

Trump emphasized the importance of American-focused policies, both nationally and globally, and said since his election, companies such as Ford, Walmart and General Motors have pledged to “invest billions of dollars” into the U.S. and create American jobs.

The creation of U.S. jobs has been one of Trump’s key points since the election.

Trump also discussed his administration’s plan to increase immigration enforcement through the construction of a wall on the country’s southern border with Mexico.

“By finally enforcing our immigration laws, we will raise wages, help the unemployed, save billions of dollars and make our communities safer for everyone,” Trump said.

In regard to Trump’s statements on immigration, Garcia said Latino/as will continue to fight against the president’s policies.

“I’m a Latino man,” Garcia said. “No matter what he says, no matter what policies he proposes, there will be Latinos going out and being active when it comes to local, state and federal politics and speaking in defiance to basically any of these xenophobic and racist policies.”

According to Garcia, the president’s speech appeared similar to his past speeches, with the same rhetoric but delivered in a calmer tone.

“As I was sitting there, I just noticed it seemed like the exact same messaging, but he just seemed more composed,” he said.

Garcia said he believes it is important for students to be actively engaged in government at the state and national level, claiming, “If you’re not at the table, you’re on it.”

During the speech, Trump recognized the widow of a Navy SEAL who was killed in a recent military operation in Yemen.

Garcia said while the atmosphere of the Congressional session was mostly divided, issues such as national service still have the ability to unite the nation.

“There’s a lot of things that divide us, but I think some things, when it comes to national service, ultimately we all unify behind,” he said.

A version of this story appeared on p.5 of the Thursday, March 2, 2017, print edition of the Daily Nexus.