With another weekend doubleheader wrapped up, the Gauchos defeat the University of San Francisco and fall to Cal; men’s tennis now improves to 5-2 on the season.

Just a few weeks before this doubleheader, UCSB came off a very successful two-game weekend which resulted in a close 4-3 victory over the Pacific Tigers and a 6-1 thrashing over Fresno State Bulldogs. 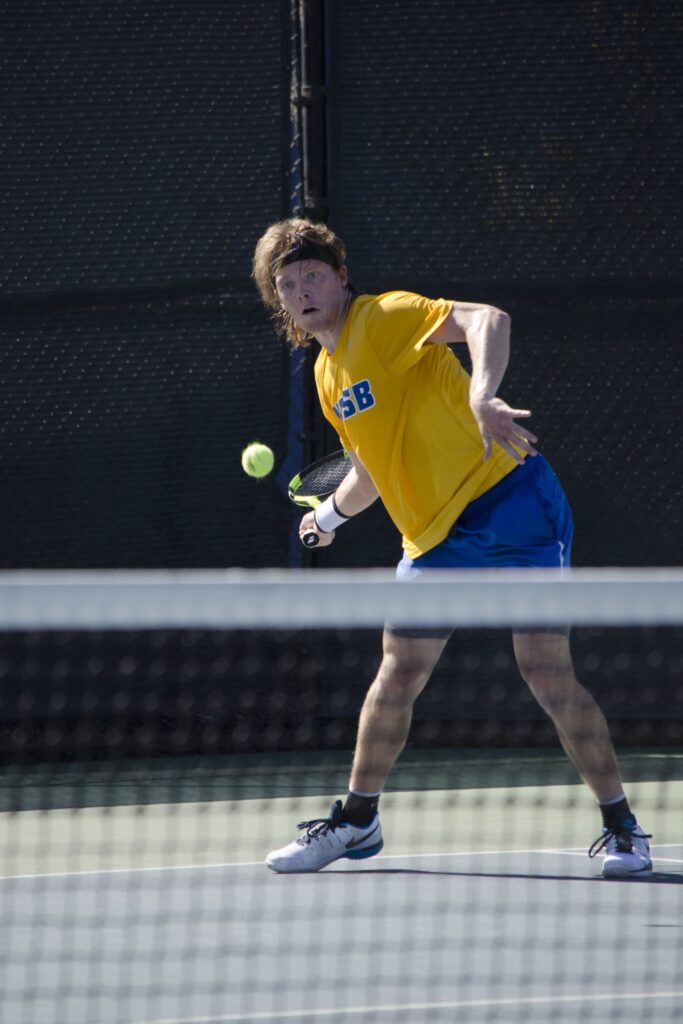 The momentum the Gauchos held leading up to last Saturday helped, as the visiting Gauchos had a 6-1 repeat over the USF Dons, but they couldn’t keep it going the day after as No. 4 Cal held them off at 4-3.

Saturday’s tennis meet began, per usual, with the doubles portion of the competition. The No. 1 slot featured the duo sensation of junior Simon Freund and senior Morgan Mays yet again. They made quick work of the home side opposition as they put up a 6-1 final score, improving their undefeated record to six straight wins. With sophomores Nicolas Moreno de Alboran and Anders Holm following up with a 6-0 sweep, the Gauchos went on to ensure the doubles advantage point.

The team’s success was reflected upon the singles portion of the meet as well, as UCSB only allowed a single point in San Fran’s 7-6, 7-5 match between junior Johan Joenhagan and Mays.

Fast-forward to Sunday, the Gauchos traveled to Cal’s Hellman Tennis Complex for their afternoon meet.

Mays and Freund went on to extend their doubles streak once again with a 5-3 victory. Ultimately, the score went unfinished as Cal claimed the doubles advantage point with slot wins by No. 2, freshman Dominic Barretto/senior Florian Lakat, and No. 3, freshman Bjorn Hoffmann/junior J.T. Nishimura.

The Gauchos had a hill to climb early on, as the overall score went to 3-0 after the Golden Bears earned the first two singles matches; senior Andre Goransson defeated Mays 6-2/6-0 and No. 20 Lakat beat Moreno 6-4/6-1.

The overall score leveled at 3-3 with only one final singles match between Freund and Cal junior Billy Griffith. Freund entered as the favorite, considering yesterday’s singles win put his undefeated tally at six-straight; unfortunately, the spoils went to the underdog. Griffith won his singles matchup and in turn won the meet for his Berkeley side at 4-3 overall on the day.

Altogether, the Gauchos had another productive weekend where their play’s positives outbalanced the negatives. Much rest and the home-side advantage are projected for the month of March, when UCSB will play its first home games of the season.

The Gauchos will participate in another doubleheader weekend as they next face Loyola Marymount on Saturday, March 4, and the University of Oregon on Sunday, March 5.