The Daily Nexus
Sports
After Weekend Sweep, Gauchos Look Ahead to Saint Mary’s
February 27, 2017 at 8:01 pm by F.P. Santangelo Jr

After putting on a hitting clinic this past weekend against the Tulane Green Wave, the UCSB baseball team will play arguably its toughest opponent so far this season in Saint Mary’s College Tuesday at 2 p.m. here in Santa Barbara. The Saint Mary’s Gaels will head into Caesar Uyesaka Stadium with a solid 4-2 record. Recently, the Gael’s split a four-game series with the University of Washington Huskies, a powerhouse Pac 12 team. 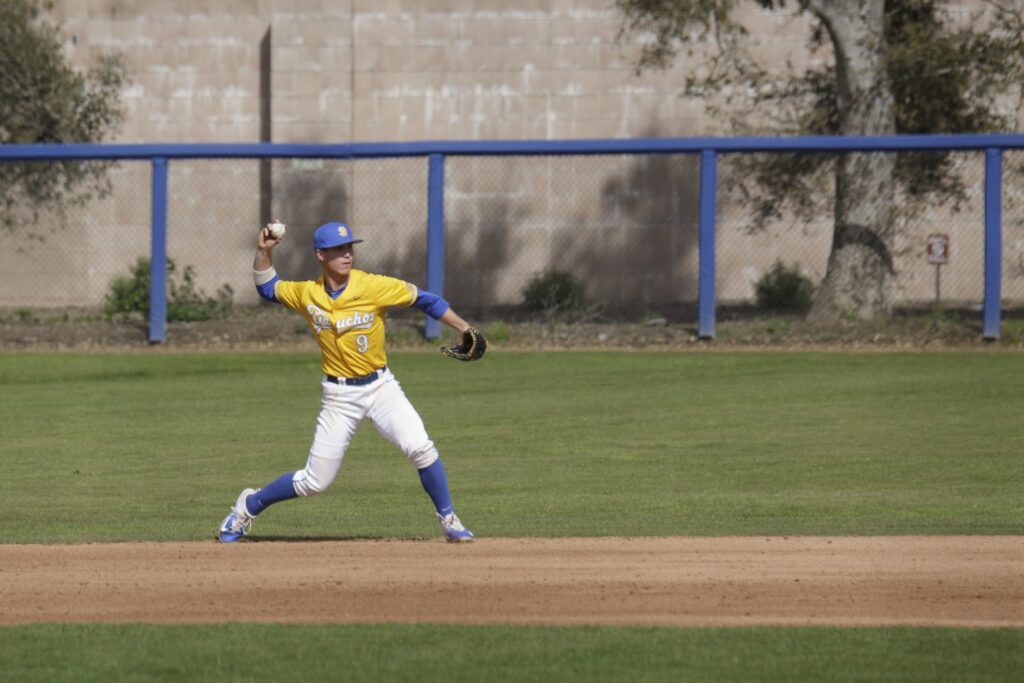 JJ Muno looks at the runner and is ready to throw. Dustin Harris / Daily Nexus

The Gaels currently have four starters hitting at .400 or higher, the most dangerous being catcher Jackson Thoreson. Thoreson is so far this season hitting an outstanding .400 with two home runs and has a slugging percentage of .760. In the series against the Washington Huskies, Thoreson went 9/17 (.529 Avg.) with a home run, five runs scored and three RBI.

Another big bat to look out for Tuesday is Gael third baseman Charles Zaloumis. Zaloumis is the team leader in both average (.471) and RBI (7), but he does not hit in the typical spot for someone with team-leading offensive numbers.

The Gael third baseman has been hitting eighth in the line-up for the Gaels and, interestingly enough, has been producing in that eighth spot. There may be a possibility that Saint Mary’s Head Coach Eric Valenzuela will move Zaloumis in the line-up, but as the saying goes, “If it ain’t broke, don’t fix it.”

The expected starters for Tuesday’s matchup are UCSB’s sophomore RHP Noah Davis (2-0) and Saint Mary’s senior RHP Cameron Neff (0-0). Last time out, Gaucho ace Davis was spectacular against the Tulane Green Wave, going seven innings, striking out 10 and giving up only two earned runs while earning his second win of the season.

Neff’s last outing was a completely different story, as Neff went five innings, giving up four earned runs off nine hits against the Huskies. With the Gauchos collecting 35 hits and scoring 27 runs this past weekend, it will be very interesting to see how Neff and the rest of the Saint Mary’s pitching staff will fare against the surging Gaucho offense.

Continuing with the now very dangerous Gaucho offense, three bats awoke for the Gauchos against Tulane, who will be key factors heading into Tuesday’s contest. The senior outfielder and DH Billy Fredrick had a huge series against the Green Wave, hitting .714 (5 for 7) with four runs and five RBI. Redshirt junior third baseman Kenny Corey also had himself a great few games, going 5 for 9 (.556) with three runs and three RBI.

However, the most important bat this weekend was that of junior first baseman Austin Bush. Bush, who headed into the Tulane series one for his last 15, found his swing, hitting .545 (6 for 11) with one home run and four RBI. If the lefty can continue his opposite-field approach into Tuesday’s game, Bush will to continue to find good barrel on the ball.

Junior left fielder Colton Burns also continues to rip the ball for the Gauchos, hitting .476 this season. Burns, who also had himself a series against Tulane (5 for 8, 7 runs), will be a problem for the Gaels if he continues to get on base. Through 31 plate appearances, the junior transfer from College of Canyons has a mind-blowing on-base percentage of .645 and scored a team-leading eight times this season. Paired with his .667 slugging percent, Burns is a very early leader for team MVP.

After a comeback ninth-inning walk-off win Sunday afternoon to get the sweep against Tulane, the Gauchos have all the momentum in the world for the Saint Mary’s matchup. Still, this one game appearance by the Saint Mary’s Gaels will prove to be yet another test for the Gauchos.