The Daily Nexus
Music
Postmodern Jukebox Brings Charm to Arlington
February 23, 2017 at 5:00 am by Allie Graydon

As I passed under the brightly blinking marquee lights and entered the Arlington Theatre, it was as if I had gone back in time. The courtyard was bustling, and everywhere I looked couples were decked out in their snazziest vintage attire. Elaborate hats with feathers or lace poked out above the crowd while brightly colored suits and long skirts formed a vibrant sea of fabric. The atmosphere was festive and fun as couples and friends alike took their seats and prepared for a swinging Valentine’s Day throwback experience.

The stage lit up with a flaming, passionate red, and the musicians of Postmodern Jukebox (PMJ) took the stage in their first ever show in Santa Barbara. The group was formed by Scott Bradlee in 2011 and became a YouTube sensation with jazz and swing covers of famous contemporary songs. After their albums and videos became widespread hits, they began touring with various musicians, singers and dancers while keeping true to the origins of their music.

During the show, Bradlee told the audience, “A lot of you have followed us from the old days when I was recording videos in my basement … so this was always a grassroots thing. Thanks to you and your shares and views, PMJ has now toured four continents.”

The show’s emcee, Mario Jose, hyped the crowd up with a loud, bright voice and some old fashioned jokes before the first number.
With a suave tone, he announced, “We’re taking you on a journey back in time tonight, when social media actually meant shaking hands with someone and swiping tinder was something you did by the fireplace in the winter.”

As the crowd laughed with him, a jazzy rendition of “Call Me Maybe” began to play, adding to the lighthearted mood. The arrangement was reminiscent of 1920s New Orleans swing with heavy banjo and a quick beat. Robyn Adele Anderson performed the song with a soaring belt and a sparkling flapper dress to match the time period.

Dani Armstrong dominated the stage next with a vibrant red dress and unwavering confidence as she sauntered to the microphone. Her rendition of Britney Spears’s “Toxic” was sultry and captivating, with a slow, pounding beat and an intense mixture of loud and soft moments. The red-headed singer hit sky high notes that filled the theatre with a vintage-style vibrato. The slight raspy quality of her voice on the low notes and occasional grinding vocals completed the seductive tone of the song.

Jose said it best when after Armstrong’s performance, he commented, “Anyone else need a smoke after that?”

In the style of old fashioned floorshows, Casey Abrams introduced himself with flair by theatrically balancing his guitar on his hand, feigning like he was going to drop it with a wide-eyed expression. At one point, just to ham it up even more, he pulled out a bottle and took a sip, all while maintaining his balance. His dazzling talent did not stop there, however, as his vocal performances exuded fun and spontaneity. His bluesy cover of “Sweet Child O’ Mine” demonstrated his strong, raspy voice, and his interaction with the other musicians kept the audience laughing and cheering. He even engaged in a vocal battle with trombone player James Hall; Abrams scatted a musical phrase and Hall mimicked him with blasts from the trombone. 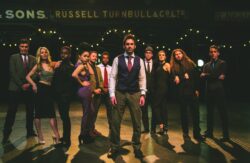 One musical battle was not enough for this show, however, as tap dancer Anise Aliah faced off against drummer Martin Dillard. The dancer’s vibrant energy shone as she kept her wide smile even through the most complex of steps. This wasn’t enough for Dillard, however, as he stopped the upbeat music and began to copy Aliah’s rhythm with his drumsticks, flipping them in the air and catching them with style. Each performer took turns attempting to best each other with impossibly fast beats. Aliah clearly won the crowd, however, as her fast turns, high kicks and relentless wing steps drove the audience wild with applause.

The evening was a true homage to the days of variety shows and spectacles of performance with one audience-grabbing, fun-loving segment after another. The musicians, dancers and vocalists captured the essence of classic jazz with spontaneity, smoothness and constant collaboration with their fellow performers. The show was meant for Valentine’s Day, as it demonstrated both the group’s and audience’s love of jazz and the swanky style of earlier times.