The Daily Nexus
Music
Kamasi Washington is a Jazz Legend in the Making
February 23, 2017 at 5:00 am by Ryan Hykes

Critically acclaimed saxophonist Kamasi Washington brought the house down at Campbell Hall last Thursday with his killer blend of upbeat funk and dynamic jazz music. Fresh off of performances at two of Southern California’s most popular music festivals, Camp Flog Gnaw and Coachella, the Los Angeles native graced Santa Barbara with a performance. He lived up to the hype that has followed him for the past few years.

Washington burst onto the scene as a solo artist with his stellar major label debut The Epic, which received nearly universal critical acclaim. Nonetheless, the famously out of touch Grammy awards curiously snubbed him last year, leaving him without a nomination for Best Jazz Album. While he’s caught the ear of most major and reputable music blogs, Washington also caught the eye of some of the most boundary-pushing artists in funk, jazz and rap.

You may have heard his saxophone work on fellow Los Angeles native Kendrick Lamar’s To Pimp a Butterfly (which is perhaps the best rap album of the past decade). Washington also has worked with label-mate and bassist Thundercat, and he’s fresh off of a collaboration with my own personal favorite group, Run the Jewels. These fantastic artists have collaborated with Washington because he’s doing something new and different with the classic styles of jazz while continuing to pay homage to its roots.

These great artists weren’t the only ones to recognize Washington’s talents, as it was clear that Washington’s recent critical success had gotten around to both locals and UCSB students. The show was sold out long before the day of the event, and the night of, the crowd even eagerly greeted Washington with a standing ovation. The bandleader, clad in blue robes, graced the stage and was joined by his band The Next Step, who were able to hold their own next to Washington himself. It was a great night of incredible music and energy, as the crowd was one of the liveliest I’ve seen inside of Campbell Hall.

Throughout the night, the band played a good mix of improvised songs and tracks from their setlist. One of the highlights was the song “Henrietta Our Hero,” an eight-minute musical and emotional journey from The Epic that Washington explained was a tribute to his grandmother. Nia Andrews contributed her beautiful vocals to the track in what was her first show with the whole band according to Washington. A third-year UCSB student and huge Washington fan, enjoyed how Washington “was able to run across the whole spectrum of emotion on the sax.” This was especially evident in songs where the sweet choruses gave way to loud, powerful saxophone solos from Washington. 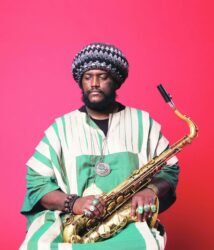 Washington’s father also joined the show halfway through, playing flute and clarinet. It was great to see because it was clear that he was incredibly proud to be playing alongside his son. The biggest musical highpoint, however, may have been a moment between only two members of the band, drummers Robert Miller and Tony Austin. Washington introduced this part of the show as a conversation between the drummers, who both had full drum sets, as they improvised rhythms with each other and traded ideas for solos back and forth. The way that they were able to listen, communicate and share through only playing music was astounding.

Perhaps the biggest highlight, however, was not musical at all but came in between the songs. During onstage banter, Washington would explain how he met the different members of the band, most of whom he met during high school or even before. Each story showed the bond they had as musicians and showed how their ability to grow musically was cultivated over many years. One of the funnier anecdotes was when he described his first time meeting trombonist Ryan Porter at a band camp when they were only pre-teens. Porter’s trombone playing was so soulful that Washington was sure he had the problems of an old man.

Porter responded that he could play the trombone that way because he woke up and had no milk for his cereal that morning and he drew on that to play. These anecdotes really added to the show and let Washington’s charisma and loveable personality shine through. Another third-year UCSB student said after the show, “I loved how you could see Kamasi Washington’s bond with everyone in the group.” This is something that cannot be witnessed from a recording. Deep bonds formed through trust, friendship and family make better jazz than anything that the most talented strangers could create.