The smell of fresh cut grass, the perfect symmetry of the white chalked lines, and the perfect feel of a well mudded up ball each add to the anticipation baseball’s return in Santa Barbara. Coming off its historic “Chomaha” run, the UCSB baseball team is looking to prove to any doubters that it belongs on the national scene.

For their season opener, the Gauchos faced off against the Loyola Marymount University Lions. Unfortunately for UCSB, the weather and the LMU Lions had different plans. 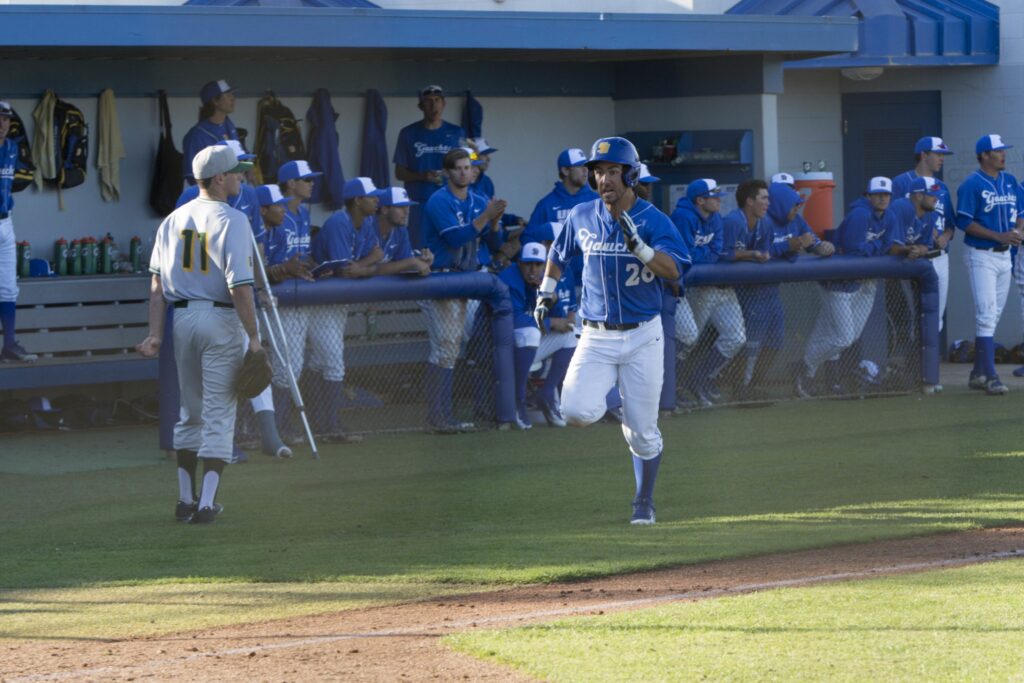 The forecasted weather would move the home opener from a Friday game at Caesar Uyesaka Stadium to a Thursday game at George C. Page Stadium located at LMU. This turnaround effectively made the season opener the official first game in the country for NCAA Division I baseball. It was a tough start for UCSB as it ended the series 1-2, while LMU sits at 2-1.

Game 1 of the series could not have gone better for the Gauchos. To lead off the game, short-stop and Preseason All-American Clay Fisher would hit a bomb over the left field fence in the Gauchos’ first at bat of the season. In one swing of the bat, Fisher would be the first person in Division I Baseball in 2017 to get a hit, hit a home run, drive in a run, and collect an RBI.

Later in the top of the fourth, still ahead 1-0 from Fisher’s lead off homerun, Colton Burns would crush a ball over the right field fence, extending the Gauchos lead 2-0. Burns, a junior college transfer from College of Canyons, is coming off a monster sophomore year where he hit .406 with 30 RBI’s and 4 homeruns.

Meanwhile, starting pitcher Noah Davis was busy silencing non-believers who thought UCSB would not have enough pitching depth or a true ace after the departure of Shane Bieber. Davis would absolutely shove, giving up only one run and striking out four in six innings pitched.

From here, the Fish Show would continue. Fisher would go 2-for-4 finishing with one run and three RBIs for the Gauchos. After some well executed sac flies from J.J. Muno (0-3, 1 RBI) and Thomas Rowan (1-2, 1 RBI), Alex Garcia would come in and get his first save of the season (1 hit, 2 strikeouts). The Gauchos and Davis would get their first W of the season with a final score of 6-3 over the Lions.

The second game, played on Saturday, featured a pitcher’s duel between UCSB’s Kyle Nelson/Steven Ledesma and LMU’s Brenton Arriaga.  The lefty Kyle Nelson was also selected for Preseason All-American honors, coming off a stellar sophomore year having a record of 7-2 with a 2.18 ERA and 10 saves.

The starting pitcher Nelson would pitch well, but had a short leash going only going four innings, giving up one run off five hits. The one run from Nelson would come from LMU’s Billy Wilson who singled, got bunted over to second base, stole third base and reached home on an infield play.

Nelson, a former closer, threw a total of 54 pitches. Expect Nelson to gradually go deeper into games as he becomes more comfortable with his starting pitching role.

Right-hander Steven Ledesma, a junior college transfer from Santa Barbara City College, came in to relieve Nelson.  Ledesma would make a case of his own as a potential starter going four innings, allowing three hits, no runs, with four strikeouts.

Although the Chos’ pitched extremely well, game two was all about LMU Senior Brenton Arriaga.  The lefty, who had all 4 of his pitches at his command, would go the distance striking out 9 batters while shutting out the Gauchos. The Gaucho’s would collect only 3 hits in 9 innings, 2 by Fisher (2-4, 2B) and one by Michael McAdoo (1-3). The Gauchos would lose a tough one by a 1-0 score.

On Sunday, the rubber match of the series would continue with Gaucho offensive woes. Through nine innings, the Gauchos mustered up only two runs off four hits, two of the four hits coming from left fielder Colton Burns (2-4).  On the other side of the diamond, the Lions tee’d off on the Gauchos’ pitching.

In an offensive explosion lead by LMU second baseman Phil Caulfield (4-5, 3 Runs, 1 RBI), the Lions would go on to score 8 runs (6 earned) on 9 hits. UCSB’s starting pitcher, Joe Record, would get the loss only going 3.2 innings while giving up 4 runs (3 earned) off 4 hits. The Gaucho’s would lose the rubber match and the series by a score of 8-2.

“I think everyone’s a little bit frustrated. You know, I don’t think we play the way we wanted to play,” Head Coach Andrew Checketts said. “We weren’t sharp defensively, got it handed to us a little bit offensively, so I think the positive to it is it’s a wake up call.  We got work to do.”

While not the start the Gauchos envisioned, there are still 53 games left on the schedule to prove to everyone if they belong. UCSB will be back in action Tuesday, Feb. 21 at CSU Bakersfield for a 6 p.m. start.