The Daily Nexus
Music
Yuja Wang and Company Take Granada By Storm
February 16, 2017 at 5:00 am by Jack Wallace

The Granada was ablaze with fervent virtuosity this week as Yuja Wang and Leonidas Kavakos filled the theatre for a night of intensity and longing on Monday, Feb. 13. Wang, whom the San Francisco Chronicle called “the most dazzlingly, uncannily gifted pianist in the concert world today,” alongside Kavakos, whose violin talents recently secured him the Léonie Sonning Music Prize, performed pieces by Janácek, Schubert, Debussy and Bartok as part of UCSB’s Arts & Lectures series.

Wang took to the stage in a resplendent glow, sporting four-inch stilettos and a tight, elegant dress that looked as if it were made of nothing but smoke and gold leaf. She has built up quite the reputation for stylish-yet-risqué outfits that allegedly get under some critics’ skin but simply lead me to think of her as the Rihanna of the concert piano world.  Kavakos, in sharp contrast, emerged solemn and subdued in a button-down and slacks. He would have fit just as well in a Silicon Valley startup office as on the stage, and this contrast foreshadowed the dynamic and complex ways the duo’s musical styles would interact throughout the night. 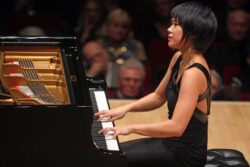 A violin sonata by Janácek started off the night, the technical difficulty of the piece immediately casting light on both Kavakos’s and Wang’s brute-force musical talent. However, the two seemed a bit tense during the first couple movements, and this rigidity meshed poorly with the already dissonant nature of Janácek’s piece. Luckily, by the third and fourth movements, they had settled into their respective grooves for the sonata’s triumphant yet melancholy climax.

Schubert’s “Fantasie in C Minor” followed, providing a welcome reprieve from the tension of the previous piece. The audience’s hopes soared alongside Kavakos’s nimble bow as he weaved a verdant tapestry of sound and light in the Granada’s expanse. Wang’s nimble fingers supplied the backdrop to the magical expanse, the Middle Earth to Kavakos’s quest for the ring, as it were. Afterward there was a short intermission, at which I overheard one patron remarking that, “this theater is run by a bunch of extortionists, I mean can you believe it, $9 for a glass of unremarkable chardonnay? They’re just playing off of people’s insecurities about talking to strangers at intermissions, like of course we’re going to get a drink, what choice do we have?” The disgruntled man wished to remain anonymous.

The audience filed back in and the two virtuosos re-emerged, Kavakos unchanged and Wang now draped in a slinky, subdued green evening dress. She must have transmuted some of her visual pizazz into musical zeal, as her performance on Debussy’s “Sonata in G Minor” elicited gasps and murmurs from the audience. As she squeezed every last drop of emotion from the Steinway’s lower register, I was shaken by vibrations in my liver itself. Or maybe another organ close to the liver.

Kavakos and Wang polished off the night with Bartok’s “Sonata No.1 in C# Minor,” a piece that would no doubt make any but the most accomplished of performers quake in their loafers. This sonic rollercoaster bore some resemblance to the Janácek piece from earlier in the night, but where the former felt constricted and claustrophobic, the duo’s nightcap exploded in a cacophony of unrestrained chaos and energy. Drowsing patrons could be seen jerking upright in their seats at the stab of a minor chord or the wail of Kavakos’s strings. The intensity continued to build and build before releasing itself in ecstatic, frenetic climax leaving both performers and audience awake, gasping and perhaps a little sweaty. At one point, I began to suspect that Yuja Wang doesn’t have hands at all, and instead performs with a pair of motion-blurs on the ends of her arms like electrons whipping around inside valence shells. Although it’s not their first performance on the Arts & Lectures circuit, it’s safe to say that Wang and Kavakos will not soon be forgotten by the Santa Barbara concert scene.