The UCSB Women’s Ensemble Theatre Troupe hosted their annual production of “The Vagina Monologues” this past weekend, with one showing Friday evening and two showings Saturday. Proceeds were donated to the Santa Barbara Rape Crisis Center following last year’s donation of $10,000.

In keeping with its themes of self-expression and self-value, the performance was adapted in the current climate of suppression to be a reminder of the fight for equality. The Troupe sought to provide strengthening reassurance for underrepresented students amidst haunting echoes of an increasingly misogynistic world.

A near-excess of vagina-shaped paraphernalia was littered around an opening night queue, including a cardboard cutout of a vagina, signaling theatergoers’ ascent into the world of the clitoris. The Troupe’s self-proclaimed mission to create an environment free of gender stereotypes and labels weighed in the tentativeness of the pre-play atmosphere, yet it was neither an obvious nor unbearable burden. A pervasiveness of enthusiasm defined the anticipation.

“The Vagina Monologues” footing was not unfounded despite the tenuousness of opening night. No sense of anxiety or intimidation staled the air. Veteran Monologues actresses returned to the stage with the full confidence of the play’s often risqué acts to reinvigorate familiar themes. Three MCs appeared onstage to transition into the play’s opening. Recalling Grecian muses, the comedic trio established the nature of the Monologues’ safe space by “recognizing all lesbian, bi, trans” fellows.

The muses guided the crowd through a vocal exercise in repeating the word “vagina” over and over, attempting to diffuse tension and set the Monologues’ theme of promoting familiarity and comfort with women’s sexuality. The muses called out every permutation of the word vagina and the region in which they are prevalent: snatch in Boston, twat in the South and pussy in Isla Vista. 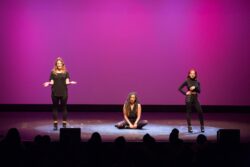 The performance is divided into two acts. Immediately obvious amongst the optimistic anticipation of the opening acts was the manifested passion; the actresses radiated a preemptive wall of sharp emotion to forge the tone of the play. The first monologues wasted no time with the gravity of “The Vagina Monologues” subject matter.

Underlying the comedic elements of the performance — nowhere better realized than in the unabashed, Brooklyn-accented monologue of an old woman from “West Side Story”-era New York titled “The Flood” — were the tension and gravity of the tragedies that defined each narrative. Each darker theme gnawed at the anti-matriarchal, “anti-vagina” construct that created them, buttressed within the actresses’ performances by passionate inflections or sobering silences.

Even within the most seemingly light-hearted narrative, each character harbored deep emotional scaring inflicted by some form of social censorship. Evident in the nature of the Monologues was the recalcitrant emotional connection between every woman and her vagina; the vagina, at last held to the light, became the symbol for the individuality and vitality of womanhood, the symbol for each woman’s progression, each woman’s pain and each woman’s ascension to joy.

As a man, the taboo surrounding the vagina instills a certain tentativeness when invited into an atmosphere devoted to the emotional aspect of its exhibition.  It feels at first voyeur to enter a space devoted not only to the uniqueness of the vagina in terms of female identity, but to the necessity of countering the vagina’s suppression, when men are almost always culpable for its suppression. We are deemed responsible for the secrecy surrounding the vagina, for the ills of repression; we are the seeming antithesis moral of feminine self-value and self-expression.

A dichotomy became apparent to me: There exists a stark polarity between the mystery and fear surrounding women’s relationship with their vaginas, thus a repression of their sexuality, and the self-destructive capriciousness that characterizes men’s relationship with their penises. Women suffer because of the censorship that makes their vaginas unknown and unexplored; men suffer because the gratuitous display of their penis renders them insecure and ashamed.

To speak to the design of the play with one fleeting criticism, the issue and presence of the gender disparity went silent and unaddressed; no attempts to reconcile or invite unity were made.

However, under the stage, there was no sense of unwelcomeness. In fact, a healthy population of males surrounded me, they enriched and appreciative as much as I. While men were primarily the cause of the play’s misfortunes, we were not generalized as the perennial culprit; rather, it was society and our own unrealistic or destructive expectations that were faulted for the tragedy.

I was inspired by Vagina Monologues to write a play myself called “Salute To The Penis”. Ladies will love it.