The Daily Nexus
Swim and Dive
Sights Are High for UCSB Swim Heading Into MPSF Championships
February 16, 2017 at 5:01 am by DJ Rubalcava

The journey to the NCAA Championships is at its most optimal moment as the UCSB men’s and women’s swim teams will be competing in the MPSF Championships in East Los Angeles.

The championships will begin on Wednesday, Feb. 15, and conclude on Saturday, Feb. 18.  UCSB’s men’s squad placed second, while its women’s team came in third in last season’s MPSF Championships. 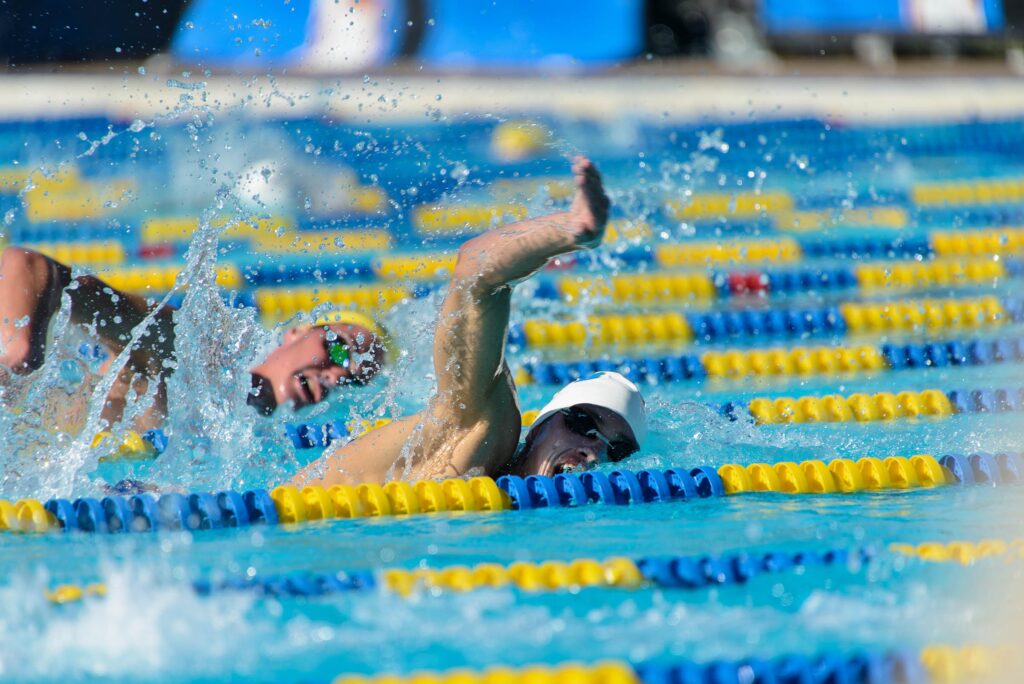 Joe Lastelic maintained his lead through most of the men’s mile. Eric Swenson / Daily Nexus

Both teams were led by athletes junior freestyle/I.M. swimmer Billy Mullis and freshman butterfly/breaststroke swimmer Heaven Quintana, both of whom have been looking extremely sharp all year, and the Gauchos will continue to look for them to produce at a high level going into the championships.

Against the Mustangs, Quintana was a member of the Gauchos’ first-place finish in the women’s 200-yard medley relay to start the meet.

Mullis was valuable for the men as he finished with an individual time of 22.42 to help UCSB win first-place with a 1:30.26 time.

The women look to improve on what was a stellar 2016 season and MPSF Championship, but many have to think the Gauchos have a chance at the gold medal.

Last year, the women finished in third place out of seven teams but were within slim reach of first.
With the young, talented swimmers that they have, especially in Quintana, the goal has to be a first-place victory.

On the other hand, the men posted a solid 2016 MPSF Championship, finishing second only to Brigham Young University.

The men have five teams in their bracket, and much like the women, they have to be intrigued by the fact that their swimmers are performing at an unbelievable level.
Anything short of first has to be considered a letdown as these swimmers seem determined and ready to work for a first-place victory.

The lady Gauchos hold a 6-1 record going into these MPSF Championships, while the men boast a 4-2 record with an impressive win against the Air Force Academy under their belt.

Both teams have been hot as of late, as the men and women are both on a three-match winning streak, and they hope this momentum propels them to the podium in East Los Angeles.

The Gauchos seem to have the 200 butterfly taken care of amongst both the men and women with these two outstanding swimmers.

Junior Jonathan Panchak has the top time in the 200 breaststroke SCY, and sophomore Logan Hotchkiss has not done too shabby either, posting the top 1000 freestyle SCY, 1650 freestyle and the 500 freestyle SCY times, respectively.

Junior Billy Mullis has been on a tear lately, and he is looking to give the Gauchos life going into this week’s match.

He also holds records amongst MPSF qualifiers in the 100 butterfly SCY and the 100 backstroke SCY.

He looks to continue a stellar season for the Gauchos this week, and they are relying on him and the youngsters to carry the load and finish well in these MPSF Championships.

The momentum and overall performance of both the men and women this season seem to benefit the Gauchos in many ways.

UCSB swim is looking to finish well in these championships, and it looks as if they are as ready as ever.

The Gauchos look to take on the competition starting this Wednesday, Feb. 15, in East Los Angeles.

A version of this article appeared on page 6 of February 16th, 2017’s print edition of the Daily Nexus.