The Daily Nexus
Sports
Gauchos’ Losing Woes Continue After Loss to CSUN
February 13, 2017 at 5:00 am by Quinn Moslander 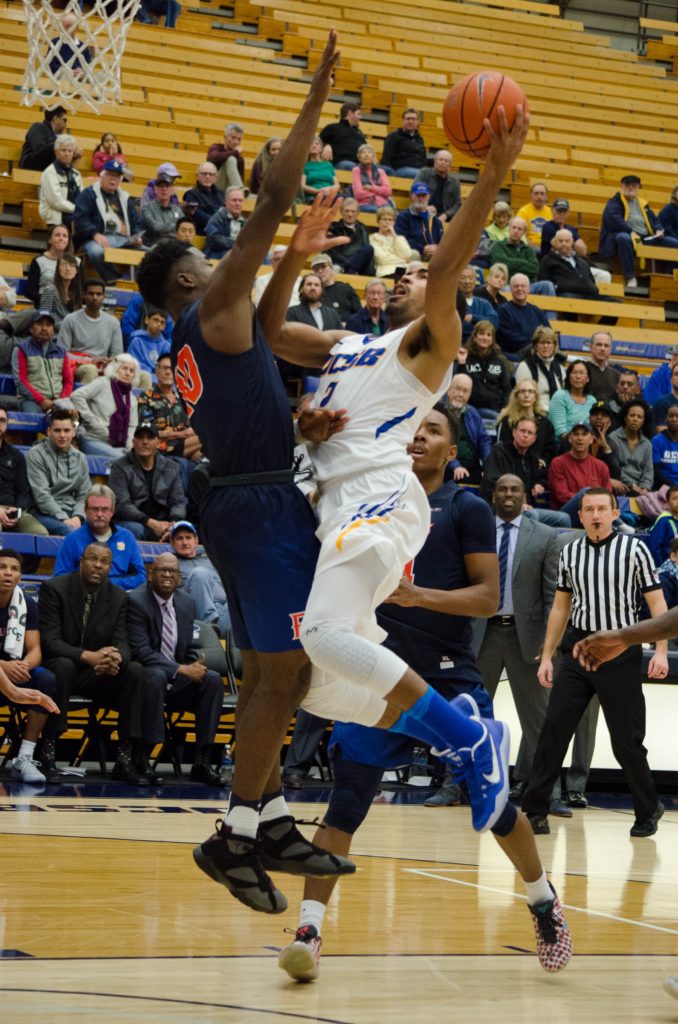 CSUN’s 77-55 victory over UCSB allowed it to sweep the season series over the Gauchos.

Scoring did not get started until the 17-minute mark when Matador junior forward Tavrion Dawson made a three-pointer, to which Gaucho senior guard Eric Childress responded with three of his own. The teams traded baskets with a brief Gaucho lead lasting only two minutes.

The Gaucho starters were working hard to make plays happen along with freshman guard Max Heidegger, who has proven to be the source of many Gaucho points this season. In the last 1:05 of the half, both teams pushed to score as much as possible, with UCSB gaining four points and CSUN gaining three, making it a close game of 34-31 at the end of the first period.

Although during the first half it may have seemed as though the Gauchos might be able to come back, nothing about the second half sent that same message. UCSB starter junior forward Alex Hart scored twice in the first two minutes for the half, but a jumpshot from Matador freshman center Mahamadou Kaba-Camara sent the Gauchos into a four-minute dry spell.

Even though UCSB was still trailing, the team managed to keep the lead small until the sixth minute when Northridge had crept up to a 10-point lead. Between senior guards Kendall Smith, Darin Johnson, Aaron Parks and junior guard Michael Warren, the Gauchos did not stand a chance.

With Heidegger and Childress carrying the bulk of the Gaucho points, it is no surprise that UCSB lost when four out of CSUN’s five starters scored a minimum 12 points each.

The Gauchos’ loose ends were unfortunately on display during the second half, especially in comparison to the Matadors’ clean and high level of play. In just the second half, UCSB had only one steal from Childress and caused seven turnovers, giving the Matadors unnecessary opportunities to score. CSUN, on the other hand, only caused three turnovers and managed to snag five steals. Little details such as these do in fact make a difference, as UCSB saw this weekend.

The Gauchos were making baskets all of the way until the end of the game; they were just unable to make them at the same speed as the Matadors. All season, UCSB has had the same huge problem: shooting and scoring. The team is able to get tons of shots off, but the shots are just not making it into the basket. Although effort does count for a lot, in this game, accuracy counts more.

Now sitting at the very bottom of the conference, the UCSB Gauchos have five games left until the Big West Tournament.

Desperately hoping to end their eight-game losing streak, the Gauchos will take on the University of Hawaii at the Thunderdome on Thursday, Feb. 16 at 7 p.m.