The Daily Nexus
News
UCSB Will Spend up to $40K on Ads Discouraging Deltopia Crowds
February 9, 2017 at 12:28 am by Deepika Chandrashekar

UC Santa Barbara will spend an estimated $30,000 to $40,000 on advertisements urging partygoers to stay away from Isla Vista during Deltopia weekend. 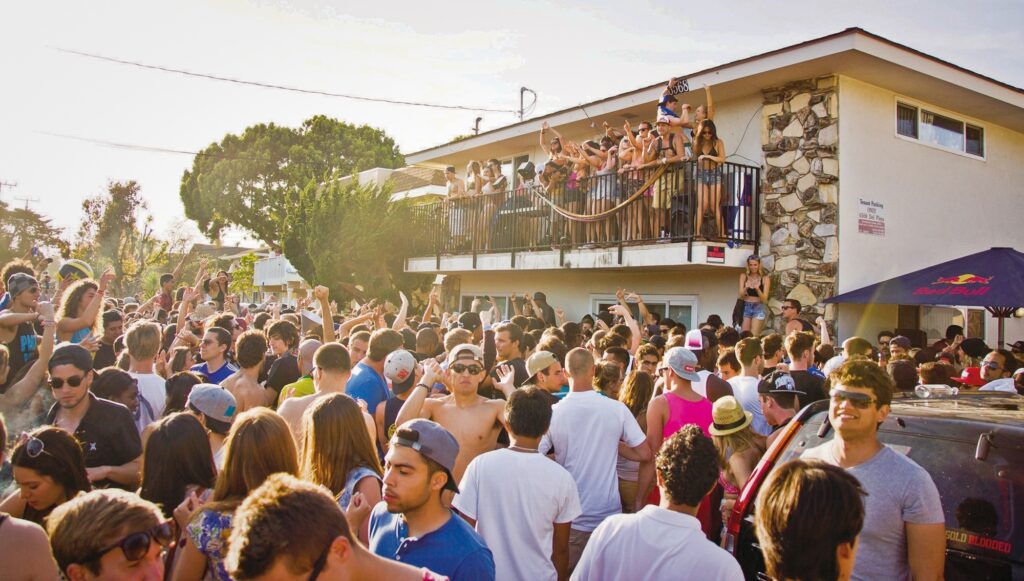 The advertisements will appear on Pandora, Facebook and television in the weeks leading up to Deltopia, which typically takes place on the first weekend after spring break.

According to Chuck Haines, the acting assistant chancellor for the Office of Budget and Planning, the funding for these advertisements comes from unrestricted gift funds, which are donations made by alumni.

He said the university spent $41,000 in advertising for Deltopia and $30,000 for Halloween last year. According to Haines, UCSB typically runs these campaigns for three to four weeks, spending $10,000 per week of advertising.

Students throughout California have reported hearing Pandora ads dissuading them from travelling to Santa Barbara for festivities held on both Deltopia and Halloween weekends.

Alongside the Deltopia ad campaign, the university also contributes $15,000 per year to the much larger countywide “Keep Isla Vista Safe” campaign that runs television and radio advertisements year-round.

Two years ago, campaign organizers posted a video on their Facebook page warning viewers that attending Deltopia could potentially result in mugshots.

The video also cautions viewers of the 300-officer police force, extra DUI checkpoints and severe parking restrictions. The hashtags #LocalsOnlyBrah and #StillPayingForIt were widely circulated on the page in preparation for last year’s Deltopia.

The Nexus reported in April that students spoke out against “Keep Isla Vista Safe,” saying that the campaign received no input from students and inaccurately portrayed Isla Vista. The UCSB Task Force Against Police Brutality and the Black Student Union also held silent demonstrations at the Arbor.

“This letter goes to my counterpart at all the other UC campuses, and we ask for it to be distributed to students,” Fleming said. “We have a list of other California colleges that includes schools from which students have been arrested or cited in Isla Vista during past years.”

The Office of Student Affairs additionally sends UCSB students emails with safety information prior to events such as Halloween and Deltopia that emphasize the university’s policy on visitors. Residence halls do not permit students to have guests during that timeframe. The university also runs ads in the Nexus and The Bottom Line.

The EVPLA office, which participates in the “Keep Isla Vista Local” campaign, sent postcards to each address in I.V. prior to Halloween weekend, in addition to communicating safety information before both Halloween and Deltopia.

Deltopia 2015 and 2016 witnessed a significant decrease in attendance paired with a drop in the number of arrests and citations.

A.S. Program Board also holds a spring concert restricted only to UCSB students, which prevents visitors from attending.

“We’ve had a lot of really positive feedback from students who like having a fun alternative that is for UCSB students only,” Fleming said.

Is this one of those Nexustentialism phony baloney parody Onion articles? What moron thinks a Pandora ad telling you to stay away from partying in Isla Vista will actually work? This is what happens when people have too much money to spend. Is homelessness over in Santa Barbara County? Are there no students left to give scholarships to? Where are the priorities of this university? As long as this Footloose nonsense continues, UCSB can forget receiving any money from me because clearly they think their job is not to educate students but to “stop” them from having a good time.

What a waste of money! Why is the school so determined to stop a party from happening? Just let kids be kids.

This is one we agree on, Jason

See, when the two of us agree on something, then you know that it really is common sense.

“Let the kids be kids” are you serious. Vandalizing, destroying public/private property, and disturbing the peace is now part of being a “kid.” If you don’t live here then I don’t think you should have a say in this. People in my community get arrested every single day for committing acts like these, but just because it’s a predominantly white community that makes it ok. Think about the message your sending. When people of color are peaceful protesting, guns, drones, and a full swat team is present, but just because according to you there “kids” your teaching them to be… Read more »

Well, I’d take the antics of UCSB students – even at their absolute worst – over the supposedly “peaceful” protest at Berkeley last week, or the “peaceful” Black Lives Matter protests in places like Wisconsin and North Carolina (which, perhaps unsurprisingly, just so happened to swing red this election). Of course I don’t support violence, vandalism, or destruction of property. I’m not a leftist! But UCSB is cracking down hard on a lot of people who are, by and large, just having some good wholesome fun. Ironically, flooding the place with cops and ticketing people for the most minor infractions… Read more »

Shows what kind of person you are!! Comparing BLM to people getting drunk, partying, raping, and vandalizing! BLM is fighting for a cause, to coexist in a society that doesn’t value their hard work, and contribution to this world. If your worried about “cracking down” well maybe you’ll have a taste of what people of color go through every day, may I add for no apparent reason, but the color of their skin. But I reiterate, goes to show how much you know about communities outside. It’s easy to google something, educate yourself.

The Consitutionalist
Reply to  Anonymous

It’s my 2nd amendment right to get drunk you coy goy. I’ll get drunk anywhere, anytime, and anywhere.

Anonymous
Reply to  The Consitutionalist

Ain’t even going to bother arguing with an ignorant constitutionalist haha ain’t worth my time!!

The Consitutionalist
Reply to  Anonymous

Ohh boy, someone’s getting buttmad. Luckily, the supreme court is gonna flip this year. See ya at the bottom of the food chain ya filthy animal.

Anonymous
Reply to  The Consitutionalist

Lucky for me I’m a citizen! Revolution is coming don’t you worry! See ya there’s haha!!

and how much is sbcc contributing…?

I just had to look up Deltopia. Looks fun!

Just had to look up Deltopia. Looks fun!

It’s not just a good time! Let kids be kids! I am not a student, but I live in Isla Vista. I worry about damage to my vehicles and my personal property. I put up with loud partying in the streets and in my apartment complex every weekend. Now I have to put up with this other foolishness too. If someone wants to party, it should not be done at the expense of others. I should not have to leave my residence all weekend and take my vehicles to a friends house to keep drunken students from destroying my property… Read more »