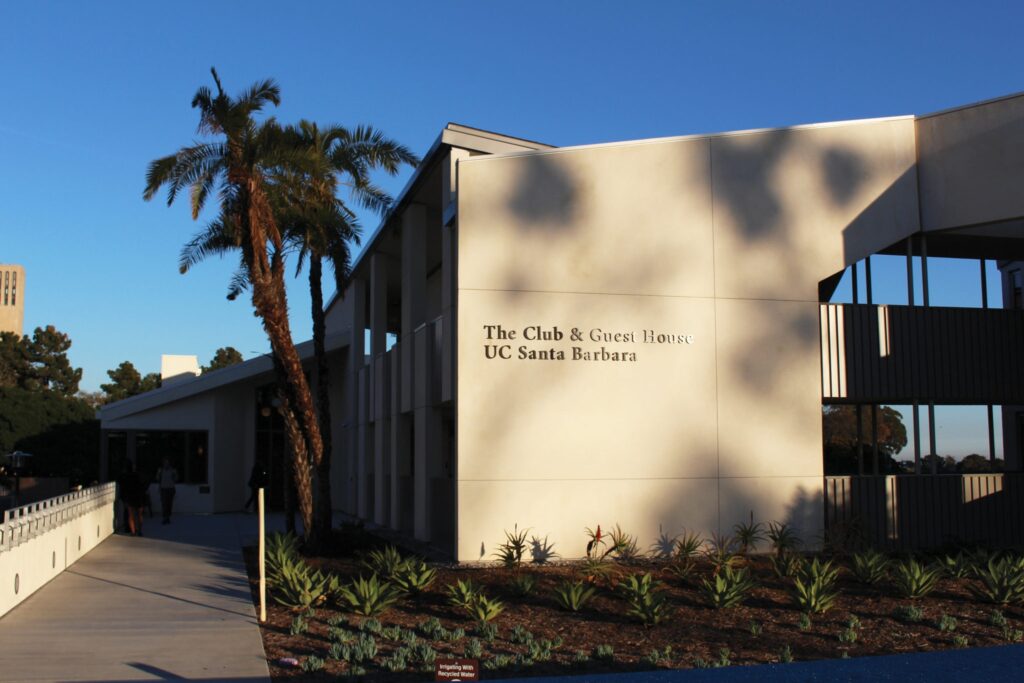 The Club & Guest House, which began renovations in 2014, welcomed UCSB students and staff to its grand opening ceremony on Jan. 31. The $30 million project was financed primarily by a 30-year, $12.84 million loan. Campbell Nolan / Daily Nexus

According to Marc Fisher, vice chancellor for campus design and facilities, the original building needed renovation because of building damage and a lack of modern conveniences such as an elevator.

The heating, plumbing and electrical systems had all been in place since the building’s construction in 1968 and were at risk of failure.

In order to make The Club economically viable, the university added 30 guest rooms to the four remaining original rooms after two were torn down in the course of renovation.

The total cost of the building was $20.6 million, $1 million of which was donated by Betty Elings Wells, a frequent donor to UCSB.

The project took a year longer than expected because of unforeseen soil conditions, as well as discrepancies between the working drawings from the 1960s and the actual condition of the faculty club.

The renovation was partially financed by a 30-year loan, which is standard for large buildings, according to Chuck Haines, the acting assistant chancellor for the Office of Budget and Planning. The loan totals $12.84 million and has a 3.78 percent interest rate.

Haines estimates that the interest payments will come out to around $9 million, pushing the total cost of the project to about $30 million.

The university expects revenue from The Club to pay for the cost of the building. According to Haines, UCSB will not use student tuition dollars to finance the building.

According to Robert Kelley, UCSB historian, the original faculty club was completed in 1968 at the suggestion of Professor Steven Horvath.

Horvath insisted that the building be a distinguished venue for visiting guests as well as faculty and community gatherings and that it be by the lagoon to capture a “serene ambiance.”

Fisher said the campus had explored the possibility of relocating The Club to a different location or repurposing the old building, but the university felt strongly that the location’s historical significance be preserved.

The new building, which overlooks the lagoon, has 34 guest rooms, a bar and lounge, private meeting and conference areas and a terrace.

Room rates start at $270 for non-members and $230 for members. In addition to paying off the loan, revenue from The Club will also support the staff and building upkeep.

In order to accommodate the limited space and high demand, guests who wish to stay at The Club must be attending a campus event or visit, be a club member, visiting faculty or conducting university business.

A version of this story appeared on p.3 of the Thursday, Feb. 9, edition of the Daily Nexus.