The Daily Nexus
Volleyball
Slumping Gauchos In Search of a Win Going Into Pepperdine Matchup
February 7, 2017 at 10:24 pm by Spencer Ault

The UCSB men’s volleyball team is in a bit of a rut. Losers of their last four matches, the Gauchos have struggled mightily in conference play and have watched their record slide to 6-5 overall, and 3-5 in league play.

Santa Barbara will take on Pepperdine University Wednesday night in hopes of ending its losing woes. 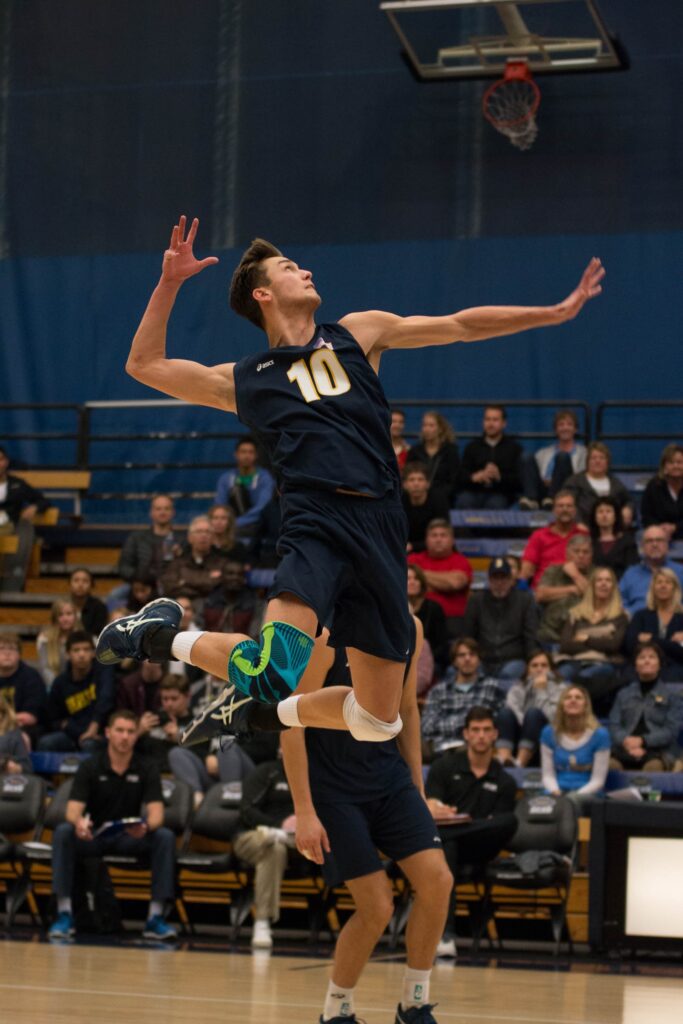 If there’s one thing UCSB needs, it’s to snap its swoon with a win. Unfortunately for the Gauchos, that’s going to be difficult to come by on Wednesday, when they take on eighth-ranked Pepperdine in Malibu.

The Waves are 4-3, and 2-2 in league play, but every one of their losses has come to a team ranked above them nationally. Those losses, particularly a 3-0 drubbing at the hands of Long Beach last Thursday, haven’t been pretty, but they give Pepperdine a sterling resume when combined with wins over top teams like Loyola-Marymount of Chicago and USC.

Redshirt sophomore David Wieczorek has led the Waves’ attack this season, leveraging his 6-8 frame into 3.81 kills per set on a sparkling .390 attack percentage. Second to Wieczorek is sophomore Michael Wexter, who isn’t far behind with 3.20 kills per set himself, and a team-leading 12 service aces.

“(Pepperdine) has two main guys on their attack,” UCSB head coach Dan McLaughlin said. “Wieczorek is a big outside hitter, he’s their premiere attacker, and Wexler is the other guy on the outside as well.”

Wieczorek and Wexter have senior setter Joshua Stewart to thank for setting the majority of their kills up. Stewart leads the team with 230 assists, and he’s in the top 20 nationally with 9.58 assists per set.

A significant portion of the Waves’ success in recent games has been their ability to let opposing teams do their work for them. Both Cal Baptist and USC outkilled Pepperdine – USC did so by a 64-51 margin – but in both games the Waves committed far fewer errors than their opponents. The error differential in both games was enough to give Pepperdine the edge despite their kills deficit.

Blocks have been similarly important to Pepperdine’s victories this year. The Waves outblocked Cal Baptist and USC by a combined 23-8.5 margin, an advantage that gave them more flexibility to overcome their lack of kills.

“(Pepperdine) blocks well,” McLaughlin said. “They do that, and they’re really well coached. (Pepperdine head coach Marv Dunphy) is one of the best coaches in the country.”

Pepperdine’s strengths – errors and blocks – are good news for UCSB. During their losing streak, the Gauchos haven’t been killed on blocks, or committed too many errors. Opponents on the attack, an area in which the Waves have not put up standout numbers, have done most of the damage instead.

Just last Saturday, for instance, the Gauchos were unable to find an answer for the Hawaii attack. The Rainbow Warriors rode a .357 hitting percentage to a 3-1 win, overriding strong performances from both redshirt senior Jacob Delson (23 kills) and Corey Chavers (18 kills).

Service is likely to be another crucial area in Wednesday’s matchup. Both teams have struggled with their serves and serve receptions in recent games, and whichever team has that figured out by Wednesday will have a key advantage.

“We mostly need to serve better,” McLaughlin said. “That hasn’t been great the past four games (…) We’re going to rely on our serve reception guys, because if we pass well we have a good shot at winning.”

UCSB takes on Pepperdine in Malibu on Wednesday night at 7 p.m.