The Daily Nexus
Opinion
Who Will Be the Martyrs of Climate Change?
February 5, 2017 at 6:51 pm by Claire Wilson 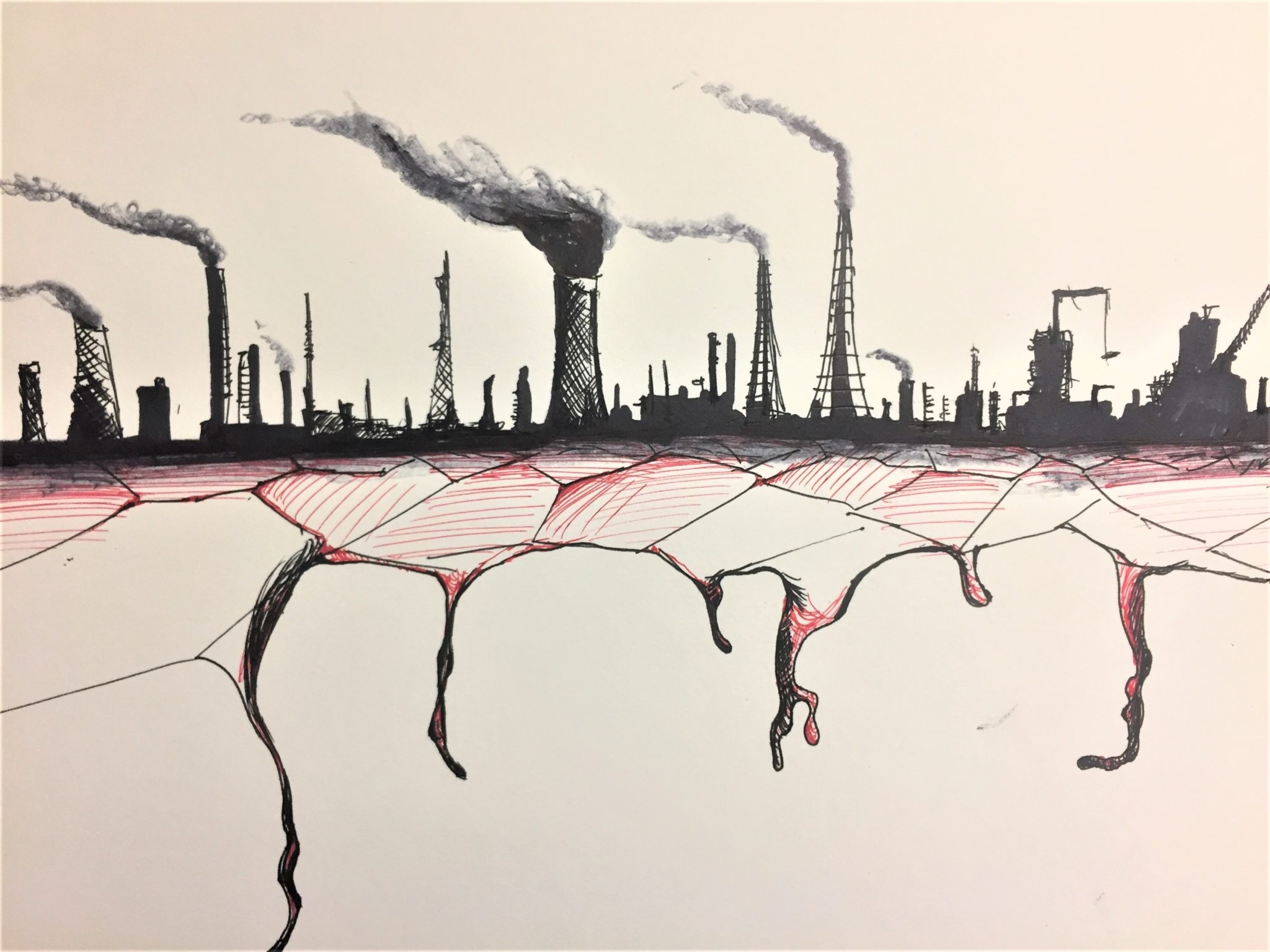 I recently had the chance to attend the “Climate and Environmental (In)Justice in the Age of Trump” lecture on Jan. 18 in Corwin Pavilion. The topic that most caught my attention was the concept of “sacrifice zones” brought up by Emily Williams. I had never heard this exact term before — which is surprising as an environmental studies major — but its meaning has been stuck in my head ever since. Sacrifice sounds scary. Sacrifice sounds like something you do when you did something wrong and want to make it right again. What did we, as a global community, do wrong to warrant such an extreme reaction?

Oftentimes, marginalized people who are too poor to relocate and have minimal representation in climate discussions are ignored completely.

Sacrifice zones are regions where the physical impacts of climate change will and are completely altering the area and, in some cases, destroying the land completely. Oftentimes, marginalized people who are too poor to relocate and have minimal representation in climate discussions are ignored completely.

This makes me absolutely livid. What did these people do wrong that has caused them to surrender their land? What did they do to reap the sheer devastating consequences of our over-consumption?

Despite hundreds of scientific papers and the staggering 97 percent of the scientific community which is in agreement that climate change is real and caused by humans, it unfortunately is still an abstract concept to many people in the United States. I oftentimes find myself enraged, heartbroken and utterly befuddled when someone tells me they do not believe in climate change or that they simply do not care.

Regardless of your personal beliefs about climate change and its culprits, we must start dealing with its effects. Sea levels are indeed rising, global temperatures are changing and natural disasters are increasing in severity and frequency. How we deal with these consequences — not only as a global community, but also as the ones responsible for causing the problem — is going to be key. So, what are we actually going to do?

A start would be to actually listen to the people who live in sacrifice zones. While they did not make the mess of pollution that is changing the planet, they should be a part of the solutions proposed. We must develop relationships with these countries and people that can facilitate change and ingenuity to develop creative and practical solutions for them.

Additionally, with sacrifice zones increasing in size, there will be more and more people in the future who will be climate refugees. In an era of Trump-ism, refugees are not being welcomed into the United States. As a country that has built its foundation and power on fossil fuels, we must take responsibility and open our doors to those who have sacrificed their homes and livelihoods for our growth.

Finally, it is time for the United States to step up. We are still consuming fossil fuels at an ungodly rate and have done little to develop renewable energies. We have billions of dollars invested in fossil fuels that we plan on burning in the future, regardless of how it alters the planet. We claim we are committed to a green future, but if you follow the money trail, it seems to paint different picture. As students and people, we must stand up to an industry that is quite literally killing people as we speak by demanding divestment from fossil fuels and limiting our own consumption of these finite resources.

The act of choosing not to care about climate change and how it affects others is a luxury Americans often overlook. How nice is it to keep our lights on in our houses because we can afford to do so, drive our gas-guzzling cars to work when it rains and turn on our air conditioning when it’s too hot to go outside? When did we stop caring about human beings, especially the ones who are paying for our climate debt as we speak?

The act of choosing not to care about climate change and how it affects others is a luxury Americans often overlook.

I reject the notion that some people are superior to others, but as a person who has undoubtedly benefitted from a country that imports oil and exports pollution, I find myself feeling guilty. However, upon reflection, I do not believe guilt is the right feeling. Yes, as citizens of a first-world country that consumes by far the most fossil fuels per capita, we must first acknowledge that WE are the problem. We can certainly do better, and we can certainly do more. We should feel an obligation to do so: an obligation to care, to think critically, to ask questions, to speak out, to fight for justice for the martyrs of climate change and for ourselves.

We do not have the luxury to turn our heads away from climate change just as the ones who came before us did. As members of a generation that will all face the physical impacts of climate change, it is our duty as global citizens and human beings to speak out and give a damn.

Claire Wilson wants you to get out and make a difference.

Please explain what these sacrifice zones are and where they are. Also to what purpose is there in opening our doors to immigrants. Won’t that just turn our country into what these people are leaving?

By electing Trump. I’m pretty sure Americans are hoping to be able to look the other way for a long time yet. America, you suck at being global citizens.

Yes, as one of the citizens of the world, I have the right to speak out how climate change ruin the lives of human being…

LVanin
Reply to  Elizabeth I. Tolentino

Yet the other world citizens aren’t paying one dime. So why should your commitment
to spending other people’s money be heeded, exactly?

and who will be the martyrs of globalisation, certainly not the establishment who are showing their true anti-democratic credentials

So go force China et al to change. Otherwise if you want to spend US cash make it on US mitigation. Any other move is a waste.

yeah sure and let them in to rap our women and child and cut the heads off our men . thats what well happen if we keep letting them in . there so many of them can tell who iss y take the chance jut close the door yes bring back the one that r over sea from the us . and take care of ur earth. they did take care of there side why let them on our to fuck it up too .

The concept of sacrifice zones as discussed here was introduced in the excellent book by Chris Hedges and Joe Sacco, “Days of Destruction, Days of Revolt.” Having grown up in one of those zones, the coal mining area of southern West Virginia, I understand the concept at a very deep level. The land in southern WV, southwestern VA and southeastern KY has been destroyed to a degree understood by very few Americans. Tops of mountains have been sheared off and the overburden (the soil and rock covering the coal seams) pushed into the deep valleys between mountains. Streams, plant and… Read more »

The Climate change movement has been willing kidnaped by big business, it’s being turned into an revenue stream.
If you really want to protest something; Try Fukushima “China syndrome”. Here is an man made extinction event, still waiting for are attention. After six years, they finally got a camera down to the bottom of the pressure vessel in reactor two. there is a meter wide hole in the vessel,the fuel rods melted through and are still reacting in the bowels of the earth! They measured 530 sieverts!
If the Pacific ocean dies, we die.

What these sacrifice zones are :

“Please explain what these sacrifice zones are” : Future underwater cost lines, new deserts, water deprived lands because of lost glaciers, too warm houses so weak people just die inside. Huge tempests breaking down on cost lines, new diseases and old one getting stronger (ebola, bird flue) etc. On top of that because we do not anticipate enough … over-population, starvation, denial, wars !!! Solution : green energies, enough guilt to stop excessive pollution during spare-time activities (Yes guilt exists to help to change things … easy, if it pollutes too much just choose something else), efficient and free world… Read more »

Do you get some sort of twisted pleasure from your self loathing?

With world population doubling every 50 years, global warming is the least of our worries.

If climate change was 100% natural, and humans had nothing to do with it, would you still try to engineer world climate?

The debate about climate change is over. The global warming alarmists lost. They could not pass a CO2 tax even when they controlled both houses of Congress and the most liberal president in U.S. history. The only “martyrs” of climate change will be all the fat cat D.C. politicians and their green cronies who won’t be able to empower and enrich themselves by impoverishing everyone else with stealth taxes. In a lucid moment we realize that it takes a special sort of highly-educated fool to have ever believed that politicians, who can’t even balance a budget, could actually stop the… Read more »

And volcanic ash – doesn’t that and cattle ranching produce more greenhouse gasses than all of the cars in the world. I suppose we could stop cattle ranching, but good luck stopping volcanic ash. 97% of the scientific community, huh? Well count me in the 3%.

Yes 99.9% of the scientific community agrees that the climate changes and that humans have had some role.

But no intelligent person believes that politicians, who can’t even balance a budget, can alter the climate of an entire planet.