Navid Yousefian Jazi, a Ph.D. student who took a leave of absence in fall, is one of three who may not be able to return from Iran. He told the Nexus Monday that he fears he may not be able to finish his degree in political science.

Maryam Rasekh, a former UCSB researcher who was set to begin a Ph.D. program in electrical engineering, is also affected. According to her boyfriend, Hassan Arbabi, a researcher with UCSB’s mechanical engineering department, the U.S. embassy in Ankara, Turkey, approved her visa just hours before Trump’s executive order banned her entry last Friday.

OISS director Simran Singh said she could not reveal the identity of the third student for security reasons, but she confirmed the student is also from Iran and is currently on a leave of absence. 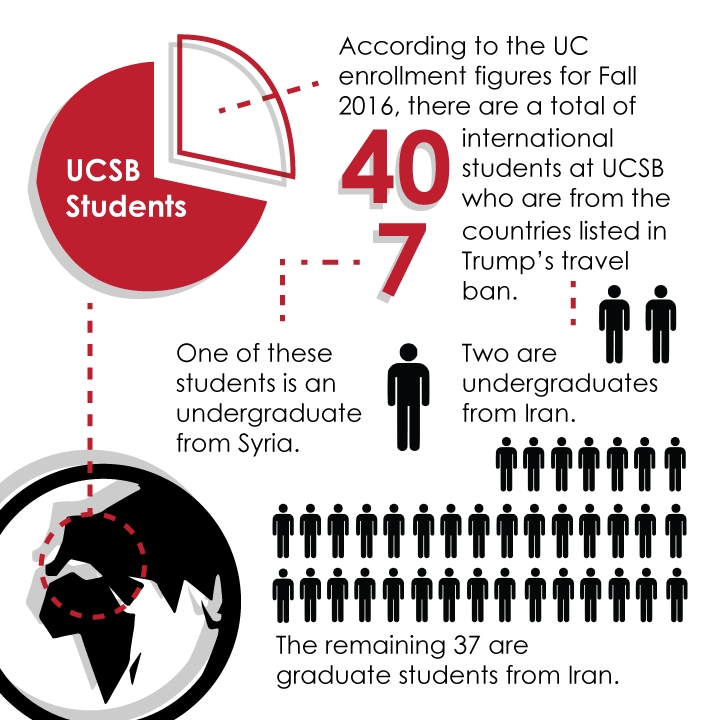 “We’re absolutely in touch with all them, giving them all the information we have and working closely with them,” Singh said.

According to fall 2016 UC enrollment figures, there are a total of 40 international students at UCSB from the seven countries listed in the travel ban. One of these students is an undergraduate from Syria, two are undergraduates from Iran and the remaining 37 are graduate students from Iran.

According to Janet Afary, a professor of Iranian studies, there is “a great deal of anxiety” among graduate students at UCSB who cannot return to Iran in fear that their visas may not be renewed.

Leila Zonouzi, an Iranian student pursuing a Ph.D. in global studies, planned to wed her fiance this summer. She said her parents and in-laws are in Iran, but since the executive order halted immigration from that country, they are unable to fly to the U.S. for the wedding.

“I won’t be able to get married because, well, let’s face it, without our parents, who are we celebrating with?” she said.

Zonouzi said the travel ban also affects visas for her fiancé’s job and her academic career. Her fiancé, who is also Iranian with a visa expiring in a year, may not apply for an H-1 visa or a green card “if this continues.” Zonouzi has a two-year visa expiring in June 2018 while enrolled in a five- to seven-year program.

“With this rate of madness, I’m not actually sure I can extend it and be a Ph.D. candidate,” Zonouzi said.

Another UCSB student affected by the travel ban is Mahdi Golkaram, an Iranian mechanical engineering Ph.D. student who said he won’t be able to see his parents for years. His parents received their visas two weeks ago after applying at the U.S. embassy and undergoing a background check for nine months.

The ban has also affected Golkaram’s job opportunities. He said he doesn’t know if he can apply for Curricular Practical Training (CPT) required for his internship placement this fall since the ban limits requests going through to the USCIS for Iranian people.

“A lot of companies that I have job offers for right now are contacting me and asking if I know what my visa and resident situation is going to be,” he said. “Even if the companies are fine with me, they will be anxious about whether or not I can accept the job offer.”

A Reddit user, posting as an Iranian-Canadian UCSB student on Saturday, said he or she was “sent back in Germany” while trying to reenter the U.S. after a trip to Tehran, Iran.

The Nexus confirmed that Yousefian Jazi and Rasekh did not post on Reddit. The Nexus has sent the Reddit user a private message each day since Saturday, but the user has not yet replied.

Kraig Rice, an immigration attorney with Juris Doctor California, said Iranian-Canadians would have been denied entry into the U.S on Friday and Saturday. The Trump administration announced Sunday that it would begin to allow entry to Canadian dual citizens.

United States Citizenship and Immigration Services (USCIS) began allowing entry to green card holders on Sunday. Those with student visas, however, are still prohibited from entering the country, according to Abbe Kingston, an immigration attorney based in downtown Santa Barbara.

“The craziness is there are already people who have been vetted, have already been interviewed, some on airplanes,” Kingston said. “That’s the hysteria it’s created. No one really thought this plan through.”

Headline is misleading and inaccurate.

They changed the title of the article. It originally used the term “Muslim ban” which as factually inaccurate. Thanks for changing it.

Trump and his staff called it a ban the day it went into effect. Everyone knows this is a ban. He specifically said he wants to privilege Christians over other immigrant groups. Get real.

Hello – Iran privileges Muskims over other religions within their country – do they not? An eye for an eye I say. I have towel heads in my neighborhood and they’re unfriendly to White people. Fuck ’em. We’re better off without them. How come Iranians want to come here but literally zero white people want to go to Iran? Ask yourself that. Do you want to move to Iran? They’re nit our friends. Do you think Iran is our friend?

Don’t waste your breath defending tRump, nobody is buying it.

Reading this puts a big smile on my face. It’s music to my ears to have a president that is taking steps to prevent mass shootings on college campuses. I dare anyone to go to Tehran and walk down a busy street with a cross on your shirt. See what happens.

Actually, we did have a mass shooting at UCSB and it was an AMERICAN that did the shooting, not someone from any of the 7 countries listed on the travel ban.

Also, are you suggesting we be just as intolerant instead of rising above the hatred?

We are here to support our fellow Gauchos who come here to study and contribute to our country.

Have you ever gotten out of your street?! In Tehran there are several churches and no one would care if you wear a cross.

I’m sure there’s plenty of students at UCSB who consider your views completely ignorant and wrong. You’re using prejudice to deny people access to education. These scholars are great members of our community and they teach in our classes, why would we want them to be hurt like this?

I’m confused…. since when are mass shootings on college campuses solely done by individuals from the 7 countries listed? LOL what?

Solely to help you out, the infographic says Iran twice

Shootings on COLLEGE campuses? Like the 31 at VT who were shot and killed by a US citizen? Like the 5-6 who were killed by a female US faculty member for denying her tenure? Etc. What mass shooting on COLLEGE campuses by folk from ANY of the countries on trump’s list (of counties he has no economic ties with) are you referring to? There is a sickness in the soul of this country; and there is no cure. The US — as envisioned by its founders — is doomed. But while we wait, we still could use a moron filter… Read more »

I’m not sure I’m correcting what you’re talking about, but the small group of students labeled with Iran are undergraduates, and the larger group are graduate students from Iran

The graphic is very misleading. The red dotted line comes off of the 7 and leads to the one Syrian individual’s symbol. The red numbers 40 and 7 should just be incorporated within the paragraph.

I hope the UC will use it’s considerable influence to speak out against such a discriminatory ban. These scholars are our friends, great members of our community and they teach in our classes. Why would we want them to be hurt like this?

Why do you hyphenate your last name dumbass?

Perhaps you could ask those students why their own countries outlaw immigration from Israel, ban building synagogues and churches, support sharia law which treats womens’ rights like dirt and punishes gays and apostates with death.

According to your logic(?) we should aspire to be like those countries?

Pathetic display of reasoning. Please say you are not in any way affiliated with higher education — it would make a mockery of the mission.

The problem with your logic is that you assume immigrants from those oppressive countries oppose the oppression in their own countries. But according to polls, most of them don’t. The scourge of sharia is wildly popular among residents of most Muslim countries.

Way to miss the point entirely. The problem with my logic!? You cannot follow the argument — much less comment coherently — as evidenced by your non sequitur reply.

Leftists think we should be nice to Islamists and let them into our country so they will be nice to us. Take a lesson from Europe and the rest of the world; it doesn’t work that way. Islam is a crazy, vicious religious cult; most Muslims don’t want to assimilate and become freedom-loving Westerners–they want you to assimilate into their theocracy. Just ask them; many pollsters have. If you bothered to learn anything about Islam or its appalling history you would know that Muhammad in his Quran told all Muslims to convert, kill or subjugate all infidels–Jews and Christians. Most… Read more »

Thanks for the long, totally irrelevant (to the point being made) lesson (i.e., non sequitur lecture). You still missed the point. Perhaps it was too simple for your intellectual prowess to tune in?

Please tell me you are not a product of this “mendacity-inspiring” institution. If so, intellectual competence in the US already is doomed.

Your argument is very childish. An eye for an eye leaves the whole world blind.

Islam grew out of a cult that was originally more a gang of cut-throat bandits than any sort of religion. Mohammad recruited followers by offering them sex slaves captured from the caravans and then villages they looted.

From evil seeds grow evil trees. That leftists reflexively side with Islam against all that is good and decent tells you all you need to know about their mentality.
-Dave Blount

You have absolutely no idea what I am talking about!

It would be simply pathetic if it was not the case you represent a large segment of the voting public.

Ok you win, comrade. Mohammad was a great guy who made a living selling Amway products.

The president does have the authority to ban the entry of foreigners, as long as he has what is called a “rational basis” to believe they pose a threat to the nation’s security. He does, and his order is designed to accomplish precisely that. The seven nations targeted by Trump in his immigration ban were originally identified in an anti-terrorism law signed by President Obama. Unlike other Muslim-majority nations that have a history of terrorism, these seven countries do not assist the U.S. in providing background checks and other vetting of immigrant applicants. Thus, it is not only “rational” to… Read more »

Clueless and empowered to cat votes. A sure prescription for a failing Democratic process.

Oh, well, all things must pass.