The Daily Nexus
Music
The Atomics Are a Blast from the Past
February 2, 2017 at 10:49 am by Fiona Moriarty-McLaughlin

Sands from the desert came rushing in early with the landing of the Atomics in Santa Barbara last Saturday at Velvet Jones. With only three months to Coachella, they are prepping and making a few last tour stops before the big festival.

The Atomics are a close-knit quartet—the band consists of the four Smith siblings: Lucky, Pyper, Daisy and Starlie. Some would say the Smiths are “genetically blessed” or “musically talented”—close to having it all. I’ll say they’re definitely something else. With a mere entrance they seem like they’re from the 70s, which may stem from their early upbringing and roots in Spanish Fork, Utah, a small town one hour south of Salt Lake City.

“We got instruments for Christmas when we were younger. When we first started, we lived in Utah, so we just set up all our instruments in the family room. We’ve been playing since then, but it was probably seven or eight years ago when we said, ‘Let’s form a band and play shows.’ We had our name, ‘The Atomics,’ and that was it. We’ve been doing this for a long time, but it keeps transitioning,” Daisy spilled.

With Lucky on drums, Pyper on bass, Daisy on guitar and Starlie on lead vocals, these siblings are invincible. It’s all in the family and it’s not about to change. When I asked him about what it’s like being the solo guy in the band Lucky said, “It can get interesting. It’s kind of like I have four moms, but they’re fun moms.” The intimacy of Velvet Jones made it seem like the audience was watching the Smiths’ performance as their relatives at a family event–the performance could have been in their living room, kitchen or backyard. 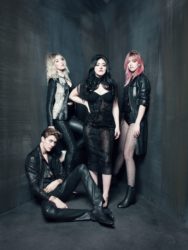 Courtesy of The Atomics

The Atomics opened up with their song, “If I Hit You in the Head,” a classic rock’n’roll-influenced surf jam. Pyper impressed the audience with her dance moves, iconically falling to the ground with her guitar. The song, “Cuz You’re in Love,” was featured in a recent H&M campaign video. It’s slow sound and wave-like beat transformed the audience from jumping up and down to a nonchalant sway. The Smiths closed their set with their latest song, “Voulez Vous,” which was released in October and is available for listening on SoundCloud.

Not only are these siblings taking the music industry by storm, but also the modeling world. All four are signed with Next Models, Los Angeles. Pyper discussed balancing music with modeling, “Well, I can’t choose between the two because they’re so different, even though they’re both in the entertainment industry. Like with music I’m a bit more free, I play what I want and dress how I want,” she said. “With modeling, everyone’s doing what they want to me and I’m trying to create an image for them. Scheduling wise it’s good because modeling is during the day. There’s set times and our photo shoots are usually in the morning, so I can always do music at night. It’s fun to do both.”

The amazing thing about this family band is how eclectic and original their sound is, yet it’s retro psychedelic. “When we first started playing together we played surf music, so we did a lot of Ventures covers,” Daisy added. “Our influences differ a lot depending on which band member you’re talking to. Like I play guitar, so I love like Dick Dale and Chuck Berry. Lucky loves old school hip-hop beats, while Pyper loves disco music and Starlie loves jazz and soulful singers.”

With so much to juggle as band mates, modeling partners and siblings, the Smiths’ still get the job done. They’ve successfully assimilated into the Californian rock’n’roll lifestyle, all while walking runways such as Dolce & Gabbana, Bottega Veneta, Fendi and Tom Ford.

“In the next year we’ll be playing Coachella. We’re going to be in Europe doing shows, so I think it’s going to be a lot of traveling, which is always fun with my siblings,” Pyper said, reflecting on what’s to come in the next few months. “I hope that we can develop our music more because a lot of our songs are different. I hope that we can focus in on a sound we all really love and become tighter as a band.”

Was at the show last week and they KILLED IT.